Film is expected to be another winner for Disney, which has captured about 35% of year-to-date market share, and heat wave may boost attendance 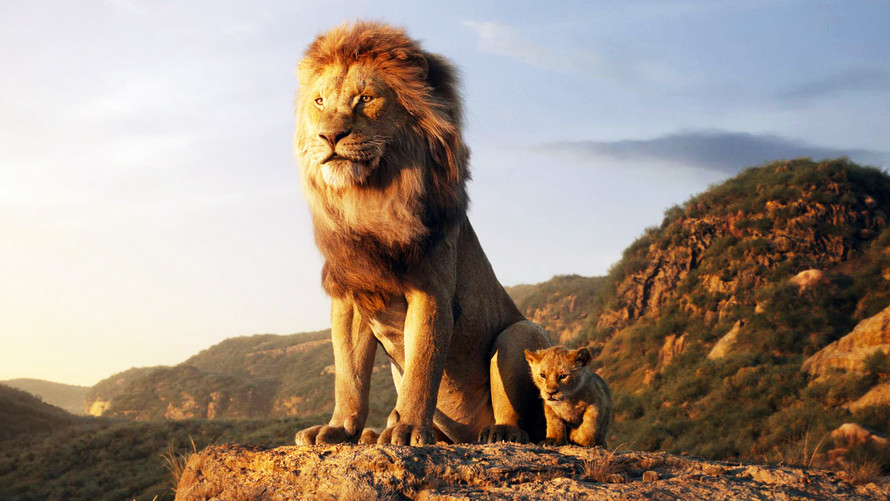 “The Lion King,” Disney’s live-action version of the animated film from 1994 and long-running Broadway hit, will roar into theaters this weekend and expectations are high.

The film /zigman2/quotes/203410047/composite DIS -0.24% , which features a new original song from Beyoncé and a starry voice cast that includes Seth Rogen, Donald Glover, John Oliver, James Earl Jones, Alfre Woodard, Billy Eichner and Chiwetel Ejiofor, among others, is expected to generate up to $190 million in box office receipts.

That would be more than the top 10 gross from the same weekend a year ago of just $157 million, that was led by the release of “The Equalizer 2” and “Mamma Mia: Here We Go Again,” with grosses of $36 million and $35 million, according to MKM analyst Eric Handler.

The film “should breathe some life into the third-quarter box office and put revenue in positive territory,” Handler wrote in a note to clients.

The film is expected to be the biggest hit of the quarter, despite some muted reviews. It has a lackluster 56% rating on review aggregator Rotten Tomatoes. New York Times critic A.O. Scott found it technically impressive, but lacking in dramatic soul. 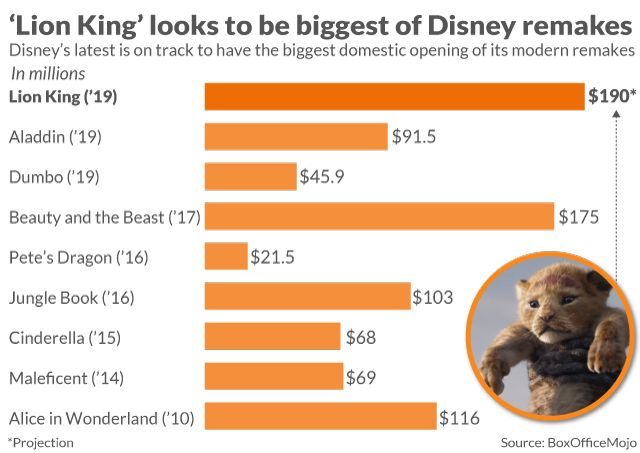 “There is a lot of professionalism but not much heart,” Scott wrote Friday. “It may be that the realism of the animals makes it hard to connect with them as characters, undermining the inspired anthropomorphism that has been the most enduring source of Disney magic.”

Still, MKM’s Handler is expecting the popularity of the original, the much-loved musical score and stunning visuals to make the film “largely critic proof.”

The heat wave that is expected to engulf parts of the U.S. over the weekend may bolster attendance, as cinemagoers flock to cool, air-conditioned theaters, said Paul Dergarabedian, senior media analyst at Comscore.

“It used to be a big selling point for theaters back in the day, they would advertise that they offered air-conditioned comfort,” he said. “That was a big deal at a time when the average person didn’t have home air conditioning. Even now, if you’re walking around in the heat and it’s super hot, you can have two hours of air-conditioned comfort and a film—it’s a win-win!”

Dergarabedian said the $23 million haul the film enjoyed in Thursday previews is impressive and a sign that the film will perform well. “It could be one of the biggest July openings ever, if not the biggest. If a PG-rated film does that well on a Thursday, imagine how it will perform on Saturday and Sunday when families are heading to the cineplex in huge numbers.”

Box Office Mojo is expecting the film to garner about $190 million in box-office receipts, above industry expectations that range from $175 million to $180 million, boosted by a record launch in 4,725 U.S. locations. That would be enough to beat current July record holder, Warner Bros. /zigman2/quotes/203165245/composite T -1.21% “Harry Potter and the Deathly Hallows: Part 2,” which opened to $169 million in ticket sales in 2011.

It would also give the film the second biggest opening of the year after “Avengers: Endgame,” another Disney film, which opened to $357.1 million.

“Spider-Man: Far from Home”, produced by Sony Pictures , is expected to take second place in the rankings this weekend with an expected haul of $22 million, according to Box Office Mojo. Third place is expected to go to “Toy Story 4,” the latest installment of the franchise developed by Disney’s Pixar.

Don’t miss: Women are taking on more leading roles in entertainment, but men are still the stars

Disney is enjoying a strong year for its films, which have garnered about 35% of year-to-date market share, according to Dergarabedian. And with “Maleficent” and “Frozen 2” still to come, along with the next “Star Wars” film in December, “the year is going gangbusters for Disney. They’re on a roll and this just continues that momentum,” he said.

See now: China’s movie box office is overtaking U.S.’s — and, yes, investors can get in on it