For more than a generation, whiskey makers have watched as vodka became the cocktail ingredient of choice for waves of hip, young people, while their own product's image seemed stuck in the 1940s.

Distillers have tried spending millions of dollars on youth-oriented marketing campaigns. They have run ads highlighting whiskey's history and tradition. They have pitched the drink to bartenders to entice them to serve it more. Yet none of it has worked to spur overall sales growth.

Now the scotch industry is trying a more radical step: pushing lighter and alternative flavors of the product itself. Scotch whisky is, to put it politely, an acquired taste, and distillers are trying to make it easier to swallow with versions redolent of citrus and vanilla that they hope will appeal to younger drinkers and women. 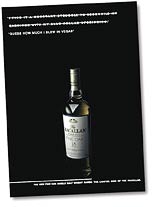 Adam Harris, a 28-year-old bartender at Dylan Prime, a Manhattan steakhouse that serves Scapa, says lighter single-malt scotches are catching on, in part because they are "an easy way for beginners to get acquainted with single malts." Scapa, which Mr. Harris says "has a bit of a heather flavor to it," has become one of the restaurant's best-selling whiskeys.

Distillers aren't only offering different tastes. They are updating the labeling, launching print ads and once again wooing bartenders. The packaging for Macallan Fine Oak uses more modern fonts -- a contemporary twist on the look of the classic Macallan.

Rémy is pushing the new whiskey in magazines such as Playboy, Food & Wine and Men's Journal, with ads that aim to convey that Macallan Fine Oak is a less complex whiskey.

In one, a lengthy explanation of a quarterback throwing a perfect pass is crossed out. Underneath, it reads "Nice Throw." The tagline: "The new fine oak single malt whiskey range. The lighter side of the Macallan."

Allied Domecq's sales staff is using short descriptions of its scotches to encourage bartenders to recommend them to inexperienced whiskey drinkers. Tormore is "smooth & subtle citrus," for example, while Scapa is "heather & honey." The company also plans to distribute cards in bars and liquor stores that promote the whiskeys using those labels.

But he says the company isn't labeling its whiskeys as "lighter tasting products." He describes Scapa and Tormore as "full-bodied malts," but says they "don't have the heavy, peaty taste of some" more complex whiskeys, such as Laphroaig, which Mr. McCarthy says is an acquired taste.

Allied Domecq is marketing its two entry-level scotches in a pack with two more pungent single malts, including well-known Laphroaig, in large markets such as Texas, California and New York.

One reason single malts are piquing the interest of drinkers is because spirit consumption in general is on the rise among younger drinkers. Whiskey connoisseurs say more single malts are available than in the past. Plus, single malts no longer are relegated to dark paneled wood bars or stuffy, white tablecloth restaurants, but increasingly are offered in all types of bars.

Some analysts say younger drinkers are more sophisticated today than 10 or 15 years ago and are looking to challenge their pallet with more complex flavors.

Allied Domecq's Mr. McCarthy says there is an element of the aspirational as young professionals see their bosses drink high-end single malt scotches.

"There has been a massive change for the scotch industry to find younger drinkers who are interested in very sophisticated spirits," says Gary Regan, spirits connoisseur and author of the Joy of Mixology, a bartending book.

There are risks with new product introductions. Distillers don't want to be associated with a product that gains a reputation as Whiskey Lite. For a drink with a tradition of appealing to sophisticated palates, the perils of seeming gimmicky are daunting.

Instead, he says, it is broadening the flavor range for those who might want to drink whiskey when the weather is warmer.

To avoid the appearance that the product is cheaper, Rémy is targeting drinkers with a yearly household income of more than $75,000 and has priced Macallan Fine Oak from $44 to $220.

"I will not be happy until I am reading in the gossip column that people in the summer in the Hamptons are sitting with a bottle of Macallan Fine Oak on the table, not a bottle of vodka," Mr. Izatt says.

Write to Christopher Lawton at christopher.lawton@wsj.com