Don’t want to fly to the moon with SpaceX? Here’s what you can get for the same price on Earth 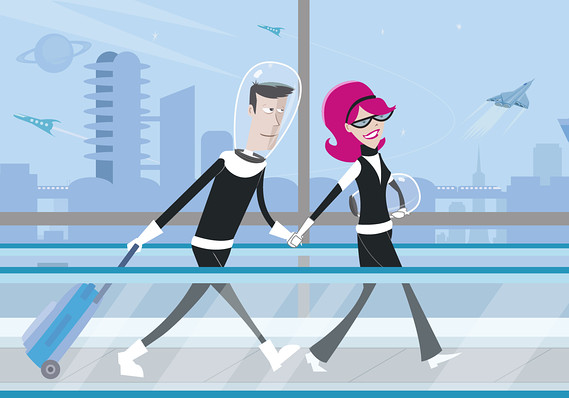 What could you buy for the price to fly to the moon? Quite a lot, it seems.

Two people have booked tickets on billionaire Elon Musk’s flight to the moon. Musk, the founder and chief executive of Tesla TSLA, said Monday that the company accepted a “significant deposit” from two private citizens” and plans to circumnavigate the moon as early as late 2018. The flight would take the vacationers hundreds of thousands of miles away from home for a week. Musk told reporters that the cost with his SpaceX company would be similar to what it would take for a private citizen to visit the International Space Station.

Based on that statement, reports put the price for one ticket at roughly $35 million . “These individuals will travel into space carrying the hopes and dreams of all humankind, driven by the universal human spirit of exploration,” SpaceX said. (Musk founded SpaceX, or Space Exploration Technologies Corp., an aerospace manufacturer and transport services company based in Hawthorne, Calif., in 2002.) 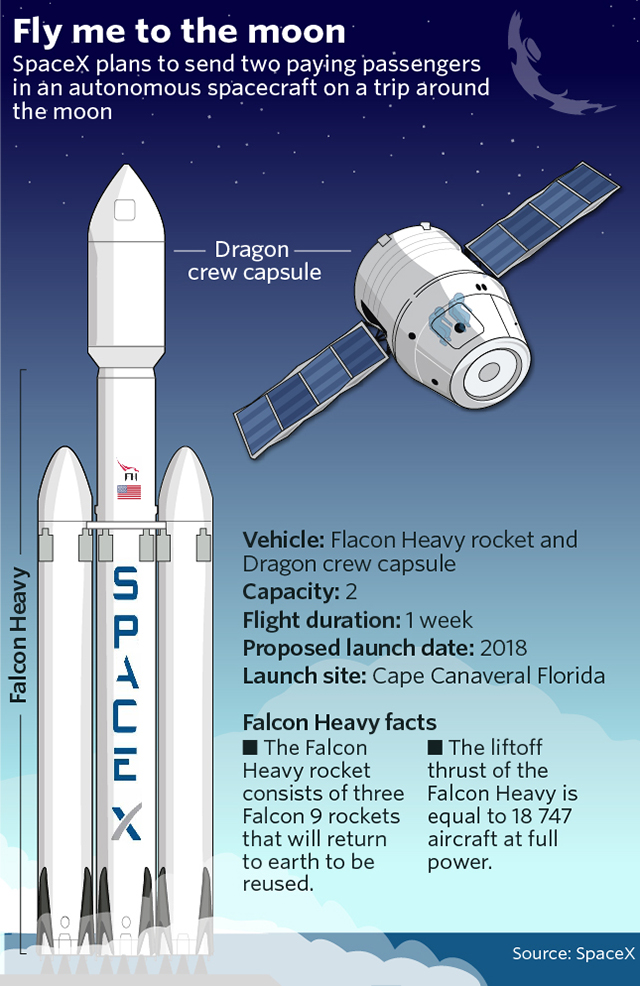 Taking $35 million as a rough price for the ticket to fly to the moon (and back), there’s a lot those two unidentified passengers could get on planet Earth for that price. That’s exactly how much New York City asked the U.S. government for last December to cover security costs for protecting President Donald Trump while he was at Trump Tower between the Nov. 8 election to the Jan. 20 inauguration. And Sotheby’s auction house sold “Two Studios for a Self Portrait,” a 1970 painting by Francis Bacon for almost that amount last year, reportedly one of the top 10 most expensive paintings sold in 2016.

You don’t need to go to the moon to spend $35 million. Musha Cau in the Bahamas, Caribbean is a private resort owned by the magician David Copperfield. It costs up to $57,000 per night or $1.7 million per month to stay there, so a super-wealthy individual who wants to get away from it all could do so for 20 months exactly for $35 million. And since it sleeps 24 people, there is plenty of room for guests. There is a slew of similar private islands for rent that would burn up $35 million in two years or less or, in fact, buy outright with some bargaining. Hemlow Island in Nova Scotia , Canada is listed for C$49 million ($37 million) on the listing site PrivateIslandOnline.com.

But for those with that kind of money, there’s no shortage of ways to spend it. Some are probably smarter than others. Last month, singer-songwriter Gwen Stefani, former lead singer of the pop band No Doubt, listed her Beverly Hills mansion for $35 million exactly. It’s nearly tripled in value since she bought it in 2006 for $13.25 million, Mansion Global reported . Stefani bought the seven-bedroom home while married to her then-husband, British musician Gavin Rossdale, for $13.25 million using her Von Trapp Trust, property records show. Jennifer Lopez also reportedly owned the home from 2000 to 2004, eventually selling it for $10.95 million. Best of all: It’s protected by two gated entries and a 250-foot driveway.

For New Yorkers, there’s 240 Centre Street, a penthouse in a clock tower on top of this landmarked police building. The four-bedroom property is priced at $35 million exactly and offers a 360-degree street view. “In the north wing, Art Deco frosted glass doors reveal an elegant private dining room, while down the hall a cozy media room is outfitted with endless built-ins under a striking coffered ceiling,” according to the listing on Warburg, the seller’s agents . The Empire State Building, Brooklyn Bridge, and One World Trade Center are all visible from the apartment. It’s also near the 6, R, J/Z and B/D subway trains, although whoever buys it will probably have his/her own driver.

And the oddest piece of heaven with a price tag of $35? The late Shirley Temple’s 9.5 carat blue diamond, which has a clarity grade of VVS2 (that means only an expert can detect flaws with a microscope with a magnification of 10 times). Temple’s father reportedly bought the diamond in 1940 for $7,210 to celebrate the premiere of her movie, “The Blue Bird.” It was estimated between $25 and $35 when it was up for sale last year by Sotheby’s auction house. However, the ring failed to sell at auction. (Opening bidding started at $19 million and closed at $22 million, which was below the ring’s reserve price .) “The Shirley Temple Blue Diamond is an exceptional stone in quality, rarity and provenance,” Sotheby’s said in a statement at the time.

For those who can afford a seat on the SpaceX journey, it may be worth it. Lift-off will be from Kennedy Space Center’s launch complex near Cape Canaveral on Merritt Island, Fla. – the same launch pad used by the National Aeronautics and Space Administration’s Apollo program for its lunar missions. “This presents an opportunity for humans to return to deep space for the first time in 45 years and they will travel faster and further into the Solar System than any before them,” SpaceX says.