A Battle Dripping With Irony

By Neil A. Martin

"IT APPEARS THAT WHAT'S GOOD for the Dutch goose is not good for the American gander," says Arthur del Prado, president and 22% owner of ASM International, a Nasdaq-traded semiconductor-equipment maker.

The 75-year-old CEO faces a showdown vote with an activist American hedge fund at an extraordinary shareholders meeting Monday near Amsterdam. With the backing of the proxy adviser Institutional Shareholder Services and British fund group Hermes, New York-based Mellon HBV Alternative Strategies, a Mellon Financial unit, is seeking a breakup of ASMI, whose results have been disappointing.

The Mellon hedge fund, which owns about 8% of ASMI (ticker: ASMI), wants to spin off the company's money-losing chip-making operations from its highly profitable semiconductor-assembly and packaging-equipment division in Hong Kong. "The company's current business structure doesn't make sense, and failure to achieve long-promised synergies between the two businesses has eroded investors' confidence," says hedge-fund chief Mickey Harley. "It's time to pursue an alternative strategy." Mellon claims to have the support of 30% of shareholders. 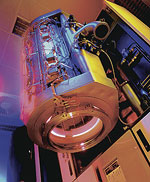 Mellon Financial (MEL), which manages $900 billion and has $4.2 trillion under custody, has been under shareholder pressure for most of the past year over some of the issues it has raised against ASMI: poor stock performance relative to its peers, an allegedly faulty business model and inadequate corporate governance.

Last fall, two activist hedge funds -- Boston-based Highfields Capital and Relational Investors of San Diego -- tried to force Mellon to sell its asset-management and asset-servicing units. Mellon, whose shares have risen 20% in the year since Barron's wrote favorably about its prospects and the chance of a breakup (" Squeezing Mellon," Nov. 28, 2005), has rejected the idea.

In fact, there's widespread speculation that Mellon in the months ahead will try to improve its profitability by shoring up its asset-management operations via a merger or acquisition.

Asked about the proposals to sell the asset-management and servicing units, a Mellon spokesman says: "The two businesses are highly complementary, with strong linkages. We are under zero pressure to divest either....Our investors recognize the synergies."

But that could change after the honeymoon period expires for Bob Kelly, Wachovia's former chief financial officer, who became Mellon's CEO last February. "He's got some time to prove to the Street that he can improve the performance of the company," says Mark Fitzgibbon, director of research at Sandler O'Neill & Partners in New York. He rates Mellon a Sell, with a 12-month target price of 37. (The stock recently was around 40). "I think he has a little bit of a grace period right now."

"To split the company now would be to squander our investment over the years and seriously jeopardize the continued release of value from our chip-equipment-making operations," contends del Prado.

The Mellon hedge fund also wants management to bring the company into full compliance with new American-style corporate-governance standards recently adopted by the Dutch government. And Mellon is demanding changes in the way board members are appointed and removed. It wants votes decided by a simple majority vote of the shareholders at meetings, rather than by holders of a majority of shareholder capital, as under current rules.

Specifically, one Calpers demand was that company bylaws could be changed by a simple majority of shareholders rather then a 75% super-majority. Mellon agreed a few weeks ago to support such a bylaw change at its 2007 annual meeting. In addition, last month it allowed a poison-pill provision, which Calpers also didn't like and would make a takeover difficult, to expire without renewal.

But other issues remain. "We want to have a say about what kind of change-in-control provisions are incorporated in management contracts that might be activated as a result of a merger or acquisition," says Pat Macht, a Calpers spokesperson. "We want to be able to vote on them. Without shareholder oversight, managements tend to create change-in-control provisions in employment contracts that can award really obscene executive compensation, retirement benefits or severance packages when triggered by a merger or acquisition."

The Bottom Line ASMI shareholders should do well, regardless of how the dispute with Mellon ends. But Mellon investors could suffer unless it makes changes. One bear has a 37 target on Mellon, recently selling close to 41.

If the Mellon activists carry the day in Zeist, Holland, where the meeting will be held, and the nonbinding resolution is approved, indications are that after management studies the proposal it is likely to reject it, just as Dutch engineering group Stork (traded over-the-counter in the U.S. under the symbol SKEUF.PK) a few days ago rejected a similar nonbinding proposal spearheaded by two hedge funds (Centaurus Capital and Paulson). Both Mellon and AMSI have vowed to take the issue to court if their conflict isn't settled.

But regardless of what happens, holders of ASMI should be winners. ASM International's shares closed Friday at 21.34, a 52-week high. Now that the chip-making part of the company's business is profitable and new digital technologies promise gains for a fully integrated manufacturer like ASMI, continuing profitability should fuel the stock price; bulls see another 10%-to-15% rise over the next year. And if the Hong Kong operations, which include a 54% stake in ASM Pacific Technology (522.Hong Kong) are sold, that would produce some sort of payout for shareholders of ASMI and ASM Pacific.

In short, whatever happens this week in Holland, it's a win-win for ASMI shareholders. For Mellon shareholders, the outlook is a lot cloudier.