Does drinking 1 bottle of wine a week raise cancer risk as much as 10 cigarettes? 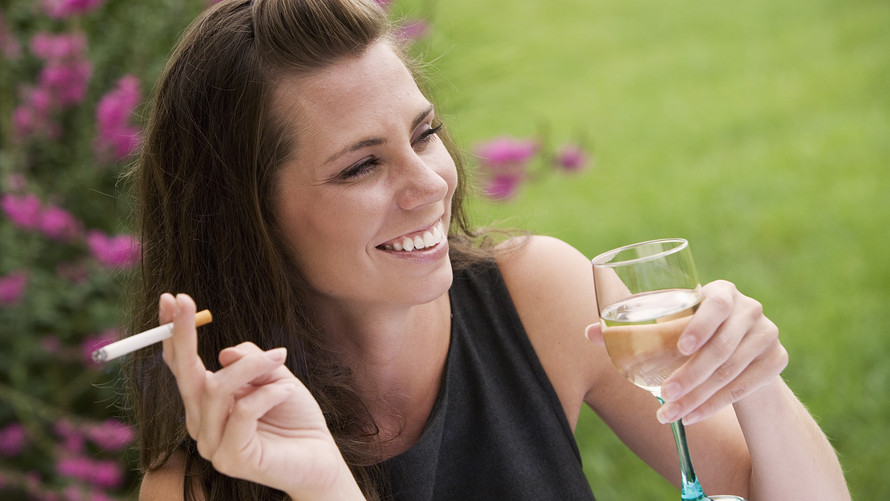 dndavis/iStock
A new study suggests drinking a bottle of wine a week has the same lifetime cancer risk as smoking five to 10 cigarettes.

How many cigarettes are in a bottle of wine?

Drinking one 750-milliliter bottle of wine a week is associated with the same lifetime cancer risk as smoking five cigarettes a week for men, and 10 cigarettes for women, according to a new study published Thursday in the journal BMC Public Health .

While many people are aware that a link between cancer and tobacco has been well established over decades of scientific research, alcohol’s classification as a carcinogen isn’t as well understood by the public. In fact, a 2017 American Society of Clinical Oncology survey found that 70% of Americans didn’t know that drinking alcohol is a risk factor for cancer.

Don’t miss: Here’s exactly how much alcohol you can drink and still be healthy

The National Cancer Institute has reported “clear patterns” between alcohol consumption and developing head and neck cancer, esophageal cancer, liver cancer, breast cancer and colorectal cancer. The more alcohol that people drink (including cumulative drinking over time) the greater their risk of developing cancer, but even light drinkers (who stick to one drink per day) and binge drinkers (knocking back four or more drinks in one sitting) have a modestly increased risk of these cancers.

They analyzed data from Cancer Research U.K. on the lifetime risk of cancer in the general population, as well as data on the number of cancers in the population that could be linked to tobacco and alcohol in particular. And they calculated that if 1,000 non-smoking men and 1,000 non-smoking women each drank one bottle of wine a week, around 10 extra men and 14 extra women could develop cancer during their lives; equivalent to the lifetime cancer risk stemming of a man having five cigarettes a week, and a woman having 10 smokes. 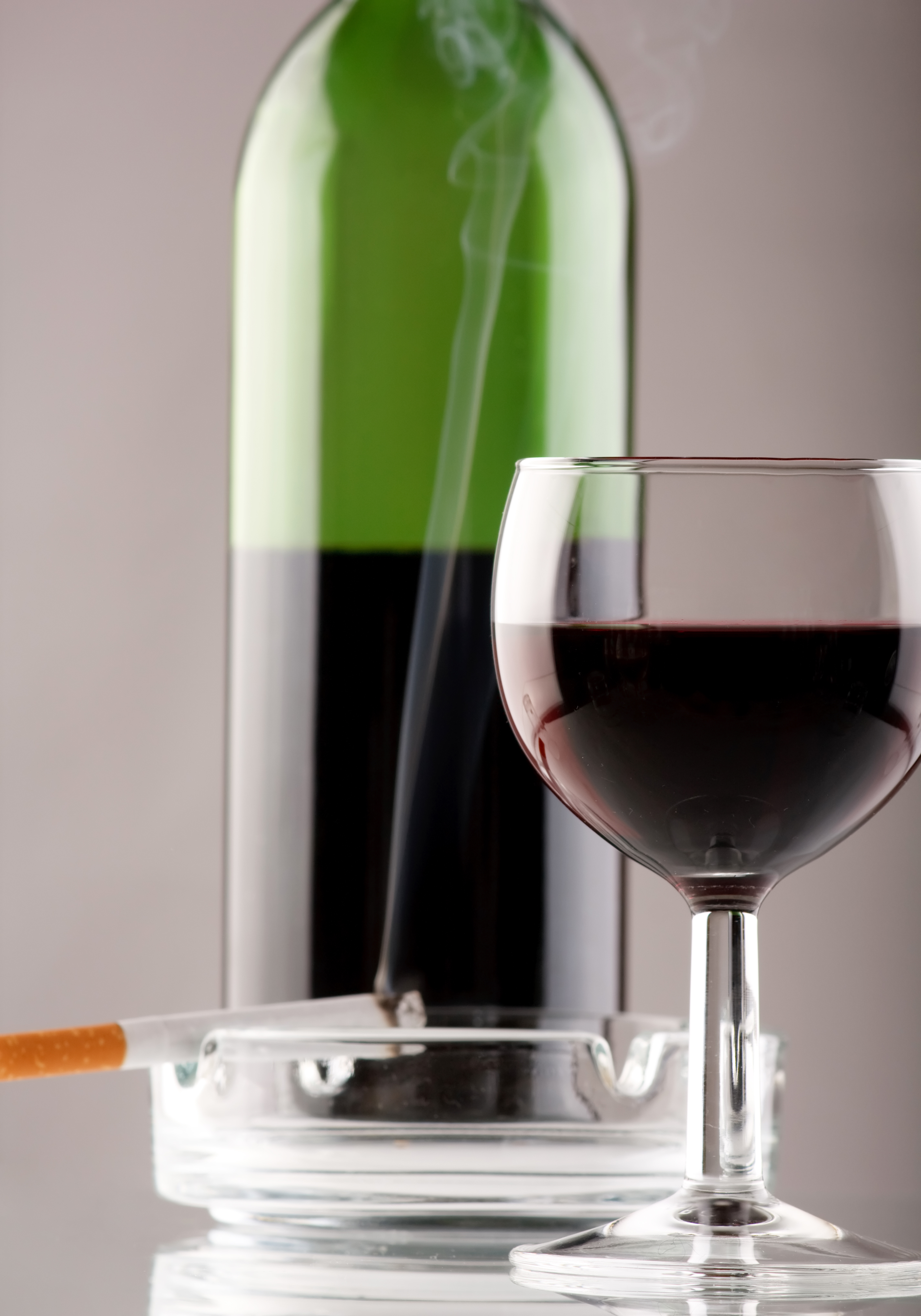 Getty Images/iStockphoto
A new study suggests drinking a bottle of wine a week has the same lifetime cancer risk as smoking five to 10 cigarettes.

Wine spikes a woman’s risk higher than a man’s because there is such a strong correlation between breast cancer and alcohol consumption. One pooled analysis of data from 53 studies found that women who had one alcoholic drink a day raised their relative risk of breast cancer by about 7% compared to women who didn’t drink alcohol; those who had two to three drinks a day had a 20% higher risk. Women also drink more wine than men, consuming 57% of U.S. bottles, according to Nielsen . Americans on the whole spent $71 billion on wine last year .

Don’t miss: How the FDA’s proposed mammogram changes could affect your next breast exam

The authors cautioned that there are plenty of caveats to their report; for one thing, it drew on data from 2004. It didn’t consider other cancer risk factors, such as age, diet or a family history of cancer. And it didn’t take into account other non-cancer smoking or alcohol-related poor health outcomes, such as respiratory, cardiovascular or liver disease.

“Alcohol is a known carcinogen. This study highlights the risk associated with alcohol consumption,” Dr. Sarah Cate, assistant professor of breast surgery at the Icahn School of Medicine at Mount Sinai told MarketWatch. (She did not work on this study.) “It is difficult to extrapolate the exact risk because the study did not examine known risk factors for cancer such as family history of cancers and other carcinogens such as external radiation exposure,” she added. “However, it is important for the public to note the carcinogenic effects of alcohol which are largely under estimated and publicized.”

Dr. Theresa Hydes, the corresponding author, explained in a statement that, “We aimed to answer the question: Purely in terms of cancer risk — that is, looking at cancer in isolation from other harms — how many cigarettes are there in a bottle of wine? Our estimation of a cigarette equivalent for alcohol provides a useful measure for communicating possible cancer risks that exploits successful historical messaging on smoking.”

There has also been research linking health benefits to moderate alcohol consumption (particularly red wine), which may be why many consumers are confused about alcohol’s carcinogen status. Studies highlighting the antioxidants (aka polyphenols, and resveratrol in particular) in red wine that are good for the heart, or research showing that moderate amounts of all types of alcohol can raise healthy cholesterol and reduce the formation of blood clots, have led many tipplers to assume that their after-work red is good for them. But a recent Harvard Medical School article noted that it’s difficult to isolate red wine as being better for your heart, or perhaps the fact that people who drink red wine may be more likely to do so as part of a healthy lifestyle, which may have more to do with their heart health than the wine itself.

A growing body of research highlights more of the downside of drinking, however. A paper published in Lancet last year stated, “the safest level of drinking is none,” finding that even just one alcoholic beverage a day slightly increased a person’s risk for health problems, including car accidents, suicides, cirrhosis, cardiovascular disease and cancers. And drinking too much alcohol raises your risk of liver and pancreas diseases, heart failure, stroke, weight gain and obesity, as well as certain cancers.

The new report also wanted to be “absolutely clear that this study is not saying that drinking alcohol in moderation is in any way equivalent to smoking,” as smoking kills up to two-thirds of its users, and is responsible for 80% of all deaths from chronic obstructive pulmonary disease (COPD) . “Our finds relate to lifetime risk across the population,” Hydes said. “At an individual level, cancer risk represented by drinking or smoking will vary and for many individuals, the impact of 10 units of alcohol (one bottle of wine) or five to 10 cigarettes may be very different.”

So don’t go pouring your wine down the drain just yet — just drink in moderation. For the record, a standard single alcoholic drink in the U.S. is measured as 12 ounces of beer; 8 to 9 ounces of malt liquor; 5 ounces of wine; and a 1.5-ounce shot of 80-proof distilled spirits or liquor, according to the National Institute on Alcohol Abuse and Alcoholism. The American Cancer Society recommends that people who drink alcohol limit their intake to no more than two drinks per day for men, and one drink a day for women.

“The use of cigarette smoking as a measure of risk is clever, but somewhat misleading,” Dr. Larry Norton, deputy physician-in-chief for breast cancer programs at Memorial Sloan Kettering Cancer Center, told MarketWatch. “Lung cancer is a much more difficult disease to cure than breast cancer, for one thing. Also, even were moderate drinking associated with increased risk of breast cancer, it would not be valid to conclude that the alcohol causes that increased risk. Association is not causation ... On the other hand, we know for sure that smoking actually causes lung and other serious cancers. So putting it all together, the equating of tobacco with alcohol has some real flaws.”