Dollar strength beyond the balance sheet

" If you want to know how rich you really are, find out what would be left of you tomorrow if you should lose every dollar you own tonight. "

In my last column, , I discussed the two major arguments, excessive money creation and U.S. debt, that U.S. dollar critics make in claiming that the dollar is not only on its last leg as the global reserve currency, but doomed to collapse. I take the position that while the dollar is challenged, it is not doomed, and in fact is very likely to stay the global reserve currency for at least another forty years and rise in value against most other currencies along the way.

The fear of imminent collapse of the dollar belies a simple, yet major, misconception about the dollar. It is not like other currencies. The value of the dollar is impacted by far more than balance-sheet numbers, which is why the U.S. balance sheet can be substantially more flexible than those of other nations.

As I discussed in a letter titled " A Cup of Optimism " last September, the United States is very unique in its currency strength. Here are eight of the core reasons why the dollar is unusually resilient:

1. The United States has a very stable government and political system.

2. The U.S. military accounts for about half the globe’s military capability.

3. The U.S. has very secure borders, including two oceans.

4. The U.S. has a huge amount of natural resources, especially when considered on a per-capita basis.

5. The U.S. workforce is among the most educated and skilled in the world (despite recent setbacks).

6. The U.S. has a network of small and medium-sized businesses that can provide much of its supply of good sand services.

7. The U.S. is a core component of the international financial system.

Some combination of those factors gives the U.S. dollar a relative edge vs. any other major currency, including the euro, yen or yuan. As we have seen repeatedly, when there is financial fear in markets, investors and savers flock to the safety and strength of the dollar. This is no coincidence. The dollar is uniquely strong due to factors beyond the balance sheet, particularly as a unit of account and a store of value.

While I acknowledge that the United States can not increase the money supply, nor run chronic trillion-dollar deficits indefinitely, I have little fear that either will occur. Also, for reasons we will discuss below, I have great confidence that the dollar can withstand at least as much debt as is projected over the next decade, so long as America flattens its debt curve by about the end of the decade and holds new money creation roughly in line with population growth. 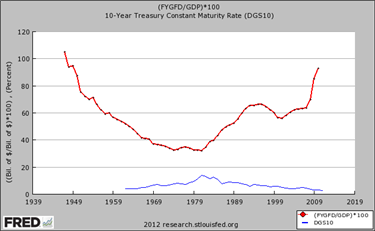 Looking at the Federal Reserve chart above, you might conclude that it is already too late for the U.S. dollar to be saved. However, I would point to a pair of periods on the chart before the most recent decade.