Dollar to bonds and stocks: Remember 2011?

Currency movement is of immense importance given how a marginal movement in exchange rates can cause significant ripples in the global economy and financial markets. From the standpoint of inter-market analysis, the granddaddy of all currencies is the dollar as the world's reserve currency.

As the dollar trends from one direction to the other, it impacts sentiment on bonds, stocks and commodities. A weak dollar tends to be viewed as one way of importing inflation, while a strong dollar exports it. The idea is that if the dollar weakens, it increases the cost of imports (cost-push inflation), while at the same time making goods cheaper to overseas buyers.

If you don't think currencies are crucial to watch, you may be ignoring Japan. The Nikkei has done very well this year because of purposeful efforts by Abe and Kuroda to drive the yen (PSE:FXY) down. The hope is to juice inflation expectations, force higher spending by consumers, and bring in more money to the country through overseas buying.

"Creditors have better memories than debtors."

There are limits to this, however, if wages do not rise, and corporations instead keep their excess export-driven profits. The weaker yen, then, for a brief period of time provides some cost-push inflationary pressure, but no commensurate immediate wage pressure higher. This eventually gets treated then as a negative for the economy, as consumers end up spending more for imported goods without increased income, causing weaker growth, and then a self-correcting rise in the currency to adjust for deflationary headwinds as a result.

In the case of the U.S., the relationship of the dollar to the consumer is similar. A weak dollar makes our goods cheaper to overseas buyers. By the same token, goods imported become more expensive, and wages do not increase to match that. Assets rise because corporations keep those excess currency-driven profits, but that in turn becomes seen as deflationary at some point as consumer pressure mounts on spending.

From this standpoint, markets are now behaviorally starting to look a bit like early 2011. Bond prices have recently strengthened and gotten a nice bid (deflationary). Meanwhile, the dollar is declining (inflationary). This divergence looks like the first part of 2011. Take a look below at the PowerShares DB US dollar Index Bullish Fund ETF (PSE:UUP)  in red with the 10-year Treasury Note Yield Index in black overlayed on top of it. Note that correlations on a rolling 20-day basis have risen between bond yields and the direction of the dollar, similar to 2011. 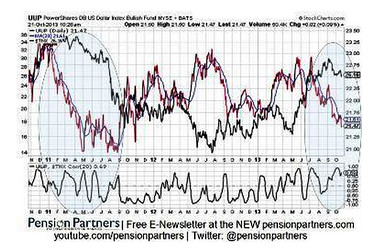 If yields continue to drop (which does seem plausible given weak growth and inflation expectations), and the dollar itself continues to fall, it might suggest a drop in stocks would soon follow, in turn reversing the dollar's trend and keeping the bid in bonds similar to the Summer Crash of 2011. This could be an important relationship to watch for those getting nervous that stocks have gotten ahead of themselves pricing in reflation which does not exist.

Stocks, most notably the Russell 2000 (PSE:IWM) , and the dollar seem to be suggesting reflation is coming. Bonds continue to disagree. With stock giddiness now at epic proportions, whatever happened to buy low, sell high?