Don’t worry about the ‘monsters’ as production is about to boom, says this fund manager 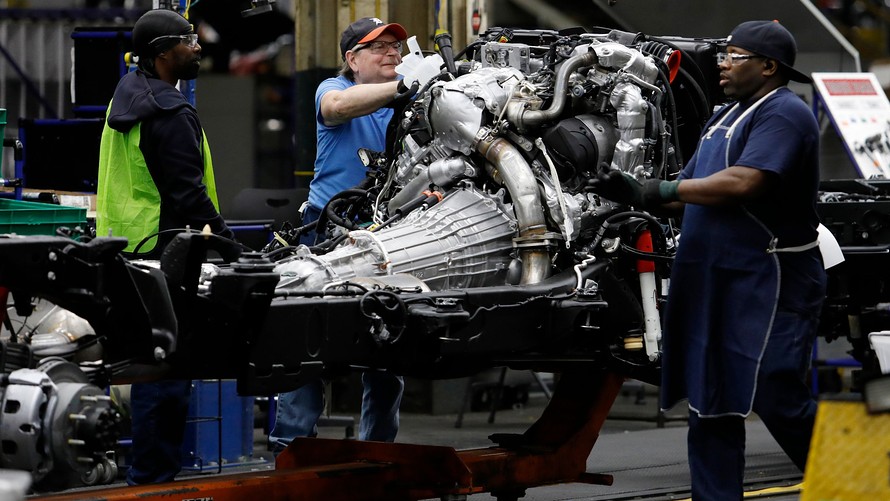 Getty Images
Factories are about to rev up, according to one fund manager.

If you ignore the tape bombs of the U.S.-China trade war—and one was dropped in the early hours of Thursday morning in a way that boosted sentiment—the other big question confronting markets is the appropriate interest-rate policy for the Federal Reserve.

“The Federal Reserve decision to hike for eight of the nine quarters in the run-up to Dec. 2018 put huge stress on the global financial system and essentially meant that global monetary policy was ill adapted to the weakness in the global economy,” says John Ricciardi, chief executive of Kestrel Investment Partners, a London-based investment manager, in an interview.

But it is a new era now—one where the Federal Reserve, as well as other central banks, are reducing interest rates. And there’s another tailwind—inventories have been building since the second quarter of 2018. “So it is going to take a little bit longer, but anywhere from 12 to 15 months later, you start to get a rebound in production very simply because they ran their inventories down.”

That, Ricciardi says in the call of the day , should lead to a boost in U.S. production and export growth toward the end of the year. As a result, his firm likes the home-building and materials sectors, and chemicals groups Linde (NYS:LIN) and DuPont (NYS:DD)  and paint supplier Sherwin Williams (NYS:SHW)  in particular. He expects a pickup in the housing sector, not just because of low mortgage rates but because of the strong jobs market underpinning consumer confidence.

Not that he’s ignoring what he calls the “monsters” out there—including the U.S.-China trade conflict, the Japan-South Korean trade conflict, the Iran-Saudi Arabia tension, Venezuela and Kashmir among others. “You can make a whole litany of things that are negative for growth and valuations, and I think they are actually in the market,” he said. “So when I see that stuff, our tendency is, is there enough things in there that are making valuations very attractive, whereby the shifts in the global cycle will suddenly make them seem less menacing.”

And the monster of an inverted yield curve? “Does somebody mean to suggest that the Fed couldn’t do a 50-point basis cut in the next few weeks,” he asks. “And [then] we’ve got a flat yield curve all of a sudden.” Ricciardi added he doesn’t take any great joy in being a contrarian at a time when recession fears are the talk of markets, and that he was with the consensus earlier in the year in seeing a global slowdown.

Good news, for a nanosecond at least, as China says it won’t immediately retaliate, to the U.S. retaliation, for China’s retaliation, on tariffs. More good news from a markets perspective as the 5 Star Movement got the green light to form a government with the center-left Democratic Party in Italy. Germany is considering cutting corporate taxes, for smaller companies at least. U.S. Treasury Secretary Steven Mnuchin said the government is considering issuing ultralong bonds.

A big slate of economic data revealed a modest downward revision to GDP showing second-quarter growth at 2%, a rise in jobless claims and a slight narrowing of the trade gap in goods. A wave of retail results: Dollar General (NYS:DG)   lifted its sales guidance for the year, while electronics retailer Best Buy (NYS:BBY)  missed on revenue for the quarter and Abercrombie & Fitch (NYS:ANF)  lowered its comparable-store sales view. And Forever 21 is considering filing for bankruptcy . 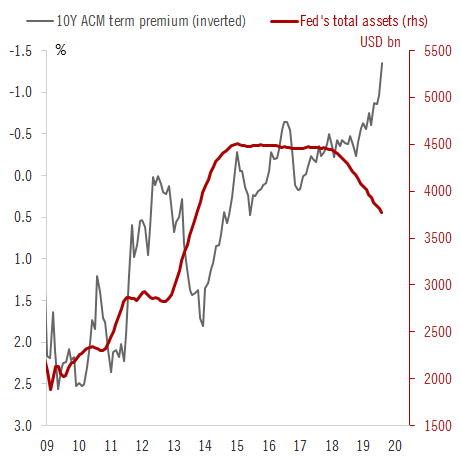 Courtesy of Frederik Ducrozet, senior European economist at Pictet Wealth, this chart shows that the term premium—the premium investors get for the risk of holding longer-term bonds—continued to fall even after the Fed’s reversal of its bond purchases. Ducrozet says it’s not that the bond purchases didn’t matter, but they weren’t the only driver. “Other central banks are having an impact as well as other drivers of global liquidity flows,” he says.

Sasha Obama is going to enroll at the University of Michigan .

Sen. Kirsten Gillibrand has dropped out of the presidential race—while Al Franken, the former senator she pressured to resign, is seeking to re-enter the public fray .