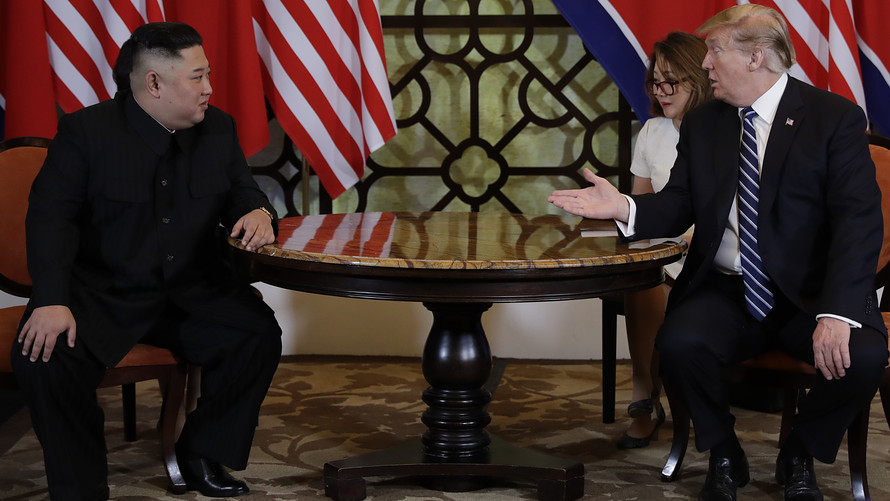 U.S. stocks finished lower Thursday after a sudden breakdown in denuclearization talks with North Korea weighed on sentiment, even though main indexes posted strong gains in February. Better-than-expected fourth-quarter gross domestic product data helped to offset some of the selling pressure during the session.

How did stock indexes fare?

White House spokeswoman Sarah Sanders told reporters at a news conference that a U.S.-North Korean nuclear agreement couldn’t be reached at the summit in Hanoi because the isolated nation wanted more sanctions lifted than Trump would allow.

President Donald Trump’s inability to persuade North Korean leader Kim Jong Un to give up nukes comes about eight months after the first meeting between the two leaders in Singapore failed to achieve concrete goals. Still, the president expressed hope that a pact could be achieved and described North Korea as having “tremendous potential.”

The political developments in Vietnam followed poor data out of China, with the country’s official manufacturing purchasing managers index figures contracting for a third consecutive month.

On Wednesday, U.S. Trade Representative Robert Lighthizer said the U.S. would abandon — for now — its threat to raise tariffs to 25% on $200 billion of Chinese goods on March 2.

The Commerce Department’s estimate of fourth-quarter GDP growth showed the U.S. economy growing at a rate of 2.6%, well above consensus expectations of 1.9%, per a MarketWatch poll of economists. GDP grew at 2.9% during 2018, according to the preliminary estimates by the Commerce Department, representing the best growth in three years. However, market participants highlighted the economic reports highlight expansion that is tapering from heady levels of a 4.2% growth rate in the second quarter of 2018.

Beyond GDP data, the Labor Department estimated that the number of American applying for unemployment benefits in the week ended Feb. 9 rose by 4,000 to a seasonally-adjusted rate of 239,000. Economists polled by MarketWatch were expecting 225,000.

The Chicago purchasing managers index rose 8 points to a reading of 64.7 in February, the largest increase since last February.

The U.S. homeownership rate in the fourth quarter was 64.8%, the Commerce Department reported, in line with expectations of economists polled by MarketWatch. Meanwhile, the national vacancy rate was 6.6% for rental housing and 1.5% for owner-occupied housing.

Federal Reserve Vice Chairman Richard Clarida said the Fed wants to be “very, very clear” that it is not altering its 2% inflation target, as it considers ways to better use that data to inform rate-hike policy. The official was speaking at the 35th Annual NABE Economic Policy Conference in Washington on “Promoting Global Growth and Domestic Economic Security.”