Drone warship Sea Hunter of the U.S. Navy is powered by artificial intelligence 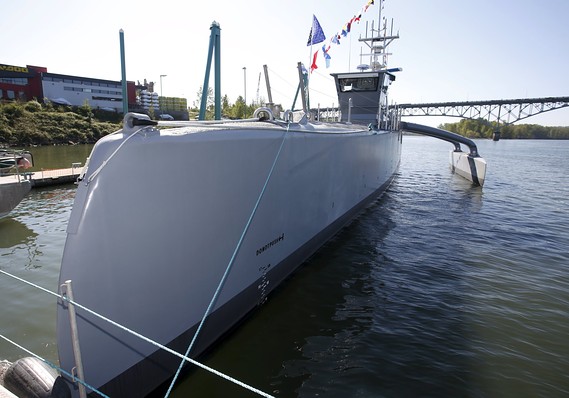 If your guess is a medium-sized naval vessel, you’d be right.

However, this particular naval vessel, a trimaran warship dubbed “Sea Hunter,” differs in one crucial detail: It needs no crew. Instead, it’s navigated by a specially designed artificial intelligence (AI), which gets its data from sensors, radars and cameras installed on the vessel.

You may have heard about AI in cars, smartphones and even in military installations, but this one is different. It tackles difficult challenges, such as wind conditions, water depth and sea currents. These are constantly changing and can affect the ship in unpredictable ways. Once it deals with the environment, the AI also has to keep the ship on course, prevent collisions with other vessels and, finally, perform military operations. It has been seven years in the making, and now it has finally seen real life use in Sea Hunter.

One of a kind

The company that engineered the vessel, Reston, Va.-based Leidos , says its trimaran is the first ship of this kind. It’s capable of autonomous navigation as it spends weeks at sea, performing tasks such as tracking enemy submarines, removing mines, detecting torpedoes and acting as a communication relay before it has to return to port — all at a fraction of the cost of a manned ship.

Operating Sea Hunter costs $20,000 a day, which is 35 times less than the daily running costs of an Arleigh Burke-class destroyer ($700,000). Also, it’s significantly cheaper to produce: $20 million for one autonomous trimaran versus $1.6 billion for a destroyer. However, Sea Hunter is not a replacement for other manned vessels. The military sees it as a jack-of-all-trades vessel, capable of providing support during wartime operations.

Currently, Sea Hunter is unarmed, but there are plans for that to change. The Office of Naval Research (ONR) is still testing the vessel and will continue to do so throughout 2019. If those tests are successful, weapons, such as missiles, will be installed on the ship. However, they would be remotely controlled by a human operator, ensuring there’s a human decision maker behind every use of lethal force.

As you can see, this drone ship seems formidable. The Navy knows that too. That’s why, in April 2018, after eight years of development, Sea Hunter joined the U.S. Navy. Much about the ship is classified, from details about the technology to exact applications in naval warfare.

One thing is certain, though: Although the ship itself is kind of “old news,” its AI is anything but. It keeps getting updated and adjusted to this day, and in January of this year, it made yet another milestone: Sea Hunter became the first ship to autonomously navigate from San Diego to Pearl Harbor, Hawaii, and back without a single crew member aboard.

To show just how content the Navy is with what Leidos is doing, it awarded the company a potential three-year, $43.5 million contract to develop a second iteration of the vessel, a sister ship aptly named Sea Hunter II. In its press release, Leidos said: “The sister ship will be evolved based upon lessons learned during the first Sea Hunter build, evolving mission requirements, and further development of autonomy enhancements.”

Since the onboard AI is likely to be something that can be carried over to another ship, I assume that tests Sea Hunter is being upgraded.

Sea Hunter may be just one ship, but its acquisition and the Navy’s interest in further research and development paint a clear picture of the direction of modern warfare: One in which both manned and unmanned vehicles, human and AI-driven combatants work hand in hand toward completing objectives and missions in the theater of war.