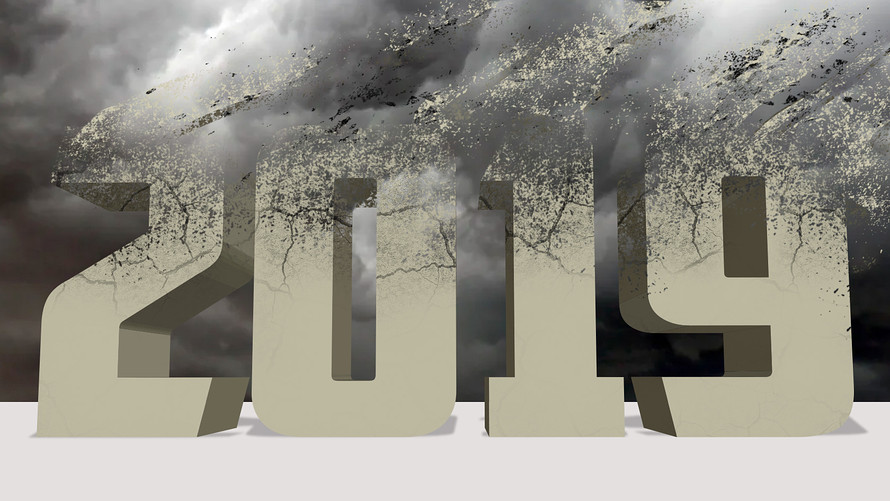 MarketWatch photo illustration
Earnings are expected to decline year-over-year in all four quarters of 2019.

The holiday season is no longer expected to pull corporate earnings out of a recession that has lasted the entire year.

Earnings in the S&P 500 index /zigman2/quotes/210599714/realtime SPX -0.29%  are now projected to decline 1.51% in the fourth quarter from the year before, according to a FactSet computation of analysts’ average forecasts for individual companies. An earnings recession is defined as two quarters or more of consecutive year-over-year declines, and earnings for S&P 500 components dipped in the first two quarters of 2019 and are all but certain to do so again in the third quarter — with nearly 95% of calendar third-quarter reports posted, earnings have dropped 2.34%, the biggest decline so far this year.

The last time profits decreased for four quarters in a row was in the period beginning with the third quarter of 2015, FactSet’s senior earnings analyst John Butters told MarketWatch in an email.

Three-fourths of earnings recessions since World War II have morphed into economic recessions, said CFRA Chief Investment Strategist Sam Stovall, who told MarketWatch that he has been “scratching his head” trying to reconcile analyst pessimism around earnings with continued stock-market rallies.

The S&P 500 has notched 10 new all-time highs since Oct. 28, but “during that entire time, earnings forecasts have been coming down,” he noted. While third-quarter earnings did fall, the decline wasn’t as steep as what analysts had originally projected, marking the 31st straight quarter when actual profits exceeded end-of-quarter estimates.

Trade fears are also affecting forecasts, as China and the U.S. continue to battle with tariffs while promising a resolution. In Stovall’s view, trade fears have analysts feeling cautious about profits even as the market seems to be anticipating that things could get better.

“Until details of the deal are revealed, along with the prospects for continued conversations, EPS estimates are likely to undershoot potential,” he wrote in a recent note to clients.

Don’t miss: Why there is a debate about the earnings recession

Analysts originally expected the earnings recession to end in the fourth quarter, projecting profits to rise 5.59% at the end of June and 2.09% at the end of September. Optimism turned around after forecasts for the holiday season came in light: Of the 87 S&P 500 components that had issued per-share earnings forecasts for the holiday quarter as of Tuesday, 60 gave projections that fell below analysts’ expectations, according to FactSet.

Some of those forecasts caused huge swings. General Motors Co. /zigman2/quotes/205226835/composite GM -1.01%  was expected to post a 33.1% fourth-quarter increase as of Sept. 30, but earnings are now projected to decline nearly 89% after a workers’ strike lasted more than a month. Rival Ford Motor Co. /zigman2/quotes/208911460/composite F -0.49%  slumped to projections of a 40.2% decline from a 7% drop amid negative impacts from warranties, incentives, and its Chinese joint venture.

Amazon.com Inc. /zigman2/quotes/210331248/composite AMZN +0.97%  , typically a big winner in holiday sales, is expected to post an earnings decline of 31.3% in the fourth quarter, after earlier projections called for an 8.3% advance. The e-commerce giant ramped up spending this year to cut its delivery times to Prime customers in half to one day, and all retailers face a shortened shopping season this year with Thanksgiving falling later in the calendar.

For more: The five U.S. companies most at fault for the earnings recession

In all, six of the 11 S&P 500 sectors are expected to show declining earnings in the fourth quarter, led by the energy sector with a 30.92% projected decrease. Consumer discretionary and materials are next, with expected profit declines of 13.76% and 6.46%, respectively. The consumer-discretionary sector — which includes GM, Ford and Amazon — suffered the biggest decline in expectations during the quarter, with projections calling for a gain of 2.53% as of Sept. 30.

Crude and natural gas prices remain below where they were in the fourth quarter of 2018, which is likely to contribute to continued profit pressure for energy companies. Chemicals companies like Dow Inc. /zigman2/quotes/203121064/composite DOW -1.83%  and DuPont de Nemours Inc. /zigman2/quotes/203606582/composite DD +0.64%  dominate the materials sector and are expected to show sustained margin weakness.

Lower energy prices should continue to benefit the utilities sector, which is expected to once again deliver the highest earnings growth. Estimates all for a 19.53% increase in the fourth quarter, following a 10.11% bump in the third. Financial companies saw a hit to earnings in the third quarter due to lower rates, but the sector is expected to rebound this quarter. Analysts project 7.12% earnings growth.

FactSet’s Butters notes that estimates call for larger earnings declines among companies with greater international exposure. For S&P 500 components that generate more than half of their revenue internationally, the average projection is for a 3.9% drop in profits as of Tuesday. Earnings are expected to be flat for those companies that derive more than half of their revenue domestically.

CFRA’s Stovall said that a trade resolution would offer some relief to multinational sectors, including industrials, materials, and technology, which also happen to be cyclical industries.

“Maybe even energy might be able to get out of its own way,” he said.