The meeting comes at one of the most unpredictable moments in Trump’s presidency, when his decision-making seems increasingly erratic 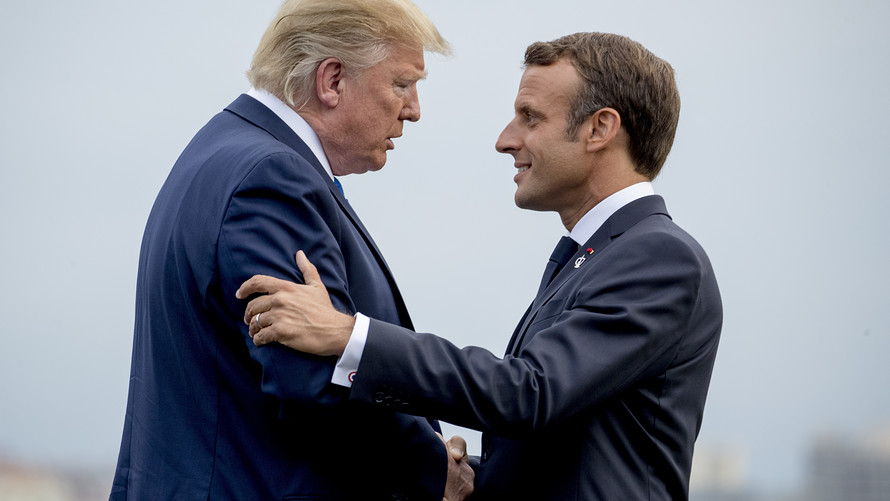 AP
U.S President Donald Trump and French President Emmanuel Macron greet each other at the G-7 summit before a dinner at the Lighthouse of Biarritz, France, Saturday, Aug. 24, 2019. (AP Photo/Andrew Harnik)

Under the threatening clouds of a global economic slowdown, President Donald Trump is confronting the consequences of his preference to go it alone, with low expectations that the leaders of the richest democracies can make substantive progress on an array of issues at their summit in France.

The meeting of the Group of Seven nations — Britain, Canada, France, Germany, Italy, Japan and the U.S. — in the beach resort town of Biarritz comes at one of the most unpredictable moments in Trump’s presidency, when his public comments and decision-making increasingly have seemed erratic and acerbic of late.

Trump, who arrived Saturday, and his counterparts are facing mounting anxiety over the state of the world economy and new tension on trade, Iran and Russia . Trump, growing more isolated in Washington, might find a tepid reception at the summit as calls increase for cooperation and a collective response to address the financial downturn. White House aides claimed he engineered a late change to the summit agenda, requesting a working session on economic issues.

The economic warning signs, along with Chinese’s aggressive use of tariffs on U.S. goods, are raising the pressure on Trump and his reelection effort. He intends to push allies at the summit to act to promote growth.

But Trump’s credibility as a cheerleader for multilateralism is in doubt, given that he has spent the first 2½ years in office promoting an “America First” foreign policy that relying on protectionist measures. Traditional American allies have come to expect the unexpected from this White House; increasingly they are looking elsewhere for leadership.

Only hours before his arrival in Biarritz, Trump had threatened anew to place tariffs on French wine imports to the U.S. in a spat over France’s digital services tax; the European Union promised to retaliate. That was the backdrop for a late addition to his summit schedule — a two-hour lunch with French President Emmanuel Macron outside the opulent Hotel du Palais.

The summit host said the two men were discussing “a lot of crisis” around the world, including Libya, Iran and Russia, as well as trade policy and climate change. But he also echoed Trump’s calls for Europe to do more to address the global slowdown, including by cutting taxes. “When I look at Europe, especially, we need some new tools to relaunch our economy,” Macron said.

Trump insisted that despite tensions, he and Macron “actually have a lot in common” and a “special relationship.” In a later tweet, he said: “Big weekend with other world leaders!

Macron outlined details of a French plan to ease tensions with Iran by allowing Iran to export oil for a limited amount of time, said a French diplomat, who spoke on condition of anonymity in accordance with the presidency’s customary practices. In exchange, Iran would need to fully put in place the 2015 nuclear deal, reduce tensions in the Persian Gulf and open talks. The plan was met with a skeptical reception by Trump, and the White House paid only a cursory mention of the Gulf in its official readout of the lunch meeting.

Trade was clearly on Trump’s mind when he left for France. Trump declared that U.S. businesses with dealings in China are “hereby ordered” to begin moving home. It was a threat to use the emergency authority granted by a powerful, but obscure federal law intended to target rogue governments, terrorists and drug traffickers, and giving presidents wide berth in regulating international commerce during times of declared national emergencies.

It was not immediately clear how Trump could use the act to force American businesses to move their manufacturing out of China and to the U.S, and Trump’s threat appeared premature — as he has not declared an emergency with respect to China.

In recent days, Trump has sent mixed signals on a number of policy fronts. At one point, he moved to simmer the trade conflict with China in order to ease the impact on American consumers during the holiday shopping season. At another, he flip-flopped on the need for tax cuts to stimulate an economy that Trump publicly insists is rocketing.

Feeding Trump’s anxiety, aides say, is his realization that the economy — the one sturdy pillar undergirding his bid for a second term — is undeniably wobbly.

Trump planned to press leaders about what can be done to spur growth in the U.S. and abroad, as well as to open European, Japanese and Canadian markets to American manufacturers and producers. Trump has imposed or threatened to impose tariffs on all three markets in his pursuit of free, fair and reciprocal trade.

The annual G-7 summit has historically been used to highlight common ground among the world’s leading democracies. But in a bid to work around Trump’s impulsiveness, Macron has eschewed plans for a formal joint statement from this gathering.

Last year’s summit, hosted by Canadian Prime Minister Justin Trudeau, ended in acrimony when Trump felt he had been slighted by Trudeau after the president left the meeting.

Trump tweeted insults at Trudeau from aboard Air Force One as he flew to a summit with North Korea’s Kim Jong Un. Trump withdrew his signature from the statement of principles that all seven nations had agreed to.

Addressing the global slowdown isn’t the only pressing challenge that Trump has discovered requires joint action.

For more than a year, his administration has struggled with persuading European leaders to repatriate captured fighters from the Islamic State group. So far his entreaties have fallen on deaf ears.

Many of the summit proceedings will take place behind closed doors, in intimate settings designed for the leaders to develop personal relationships with one another. On Saturday night they dined at the Biarritz lighthouse, with commanding views of the Bay of Biscay.

Trump, White House aides said, was looking forward to a Sunday morning meeting with new British Prime Minister Boris Johnson , the brash pro-Brexit leader whose election he’d backed. The two spoke by phone on Friday, and Johnson said Saturday he would use the meeting to push Trump to de-escalate the American trade war with China.

Other topics on the agenda will be the clashes between police and pro-democracy protesters in Hong Kong; Iran’s renewed nuclear enrichment and interference with shipping in the Strait of Hormuz; and the Islamic State prisoners currently imprisoned by American-backed Kurdish forces in Syria.