Some lawmakers say president not welcome in grieving city 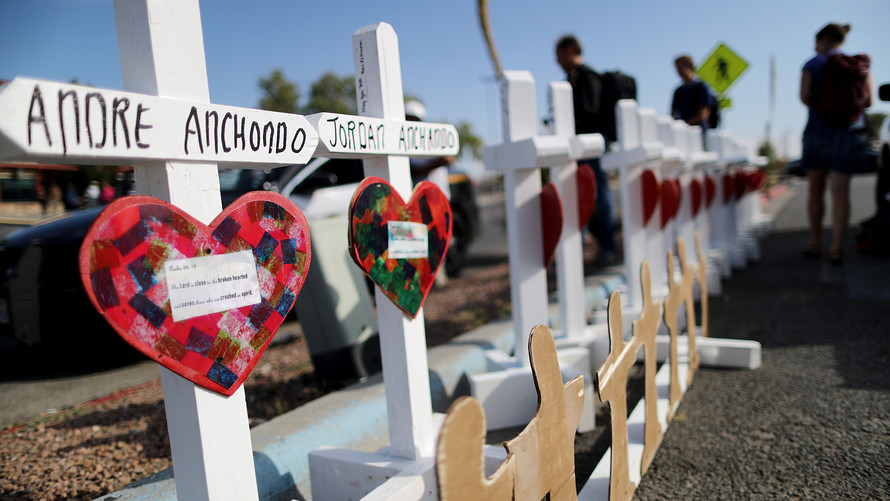 Getty Images
Handmade crosses memorializing the victims of a mass shooting, which left at least 22 people dead, are lined up before being carried to a nearby makeshift memorial Monday in El Paso, Texas.

EL PASO, Texas — The Texas border city jolted by a weekend massacre at a Walmart absorbed more grief Monday as the death toll climbed to 22 and prepared for a visit from President Donald Trump over anger from El Paso residents and local Democratic leaders who say he isn’t welcome and should stay away.

El Paso Mayor Dee Margo announced at a news conference that Trump planned to visit Wednesday, and in an early sign of emotions already running high, immediately defended the decision to welcome the president.

Trump coming to El Paso in wake of the tragedy is unnerving some residents and politicians who said his divisive words are partly to blame. But Margo, a Republican, deflected criticism.

Acknowledging the backlash in the community, Margo added: “I’m already getting the emails and the phone calls.”

In scripted remarks from the White House, Trump urged unity while blaming mental illness and video games. He made no mention of limiting gun sales.

Democratic Rep. Veronica Escobar of El Paso made clear that the president was not welcome in her hometown as it mourned. Democratic presidential candidate Beto O’Rourke, who was an El Paso congressman for six years, also said Trump should stay away.

“This president, who helped create the hatred that made Saturday’s tragedy possible, should not come to El Paso. We do not need more division. We need to heal. He has no place here,” O’Rourke tweeted.

Other residents in the largely Latino city of 700,000 said Monday that Trump’s rhetoric is difficult for them to stomach.

“It’s offensive just because most of us here are Hispanic” said Isel Velasco, 25. “It’s not like he’s going to help or do anything about it.”

Authorities are scrutinizing a racist, anti-immigrant screed posted online shortly before police say Patrick Crusius, 21, opened fire on Saturday. Language in the document mirrors some of the words used by Trump, who on Monday denounced white supremacy, which he has been reluctant to criticize.

The White House hasn’t announced Trump’s trip but the Federal Aviation Administration has advised pilots of a presidential visit that day to El Paso and Dayton, Ohio, where a second weekend shooting left nine people dead.

Authorities at the news conference in El Paso also revealed details about the suspect’s whereabouts before the shooting — some of the first to come out regarding his movements. Police Chief Greg Allen said Crusius drove more than 10 hours from the Dallas area before arriving in El Paso. He said Crusius got lost in a neighborhood before ending up at Walmart “because, we understand, he was hungry.” Allen didn’t elaborate.

Crusius is from the affluent Dallas suburb of Allen. The police chief said the gun used was legally purchased near the suspect’s hometown. The chief did not say what kind of weapon it was but described the ammunition as 7.62-caliber, which is used in high-powered rifles.

Crusius, who is being held without bond, said in his application for a public defender that he has no income or assets and has been unemployed for five months.