Emergency tents, restrictions back as virus spikes in Madrid

The Spanish capital’s rate of transmission is more than double the national average, which already leads European contagion charts 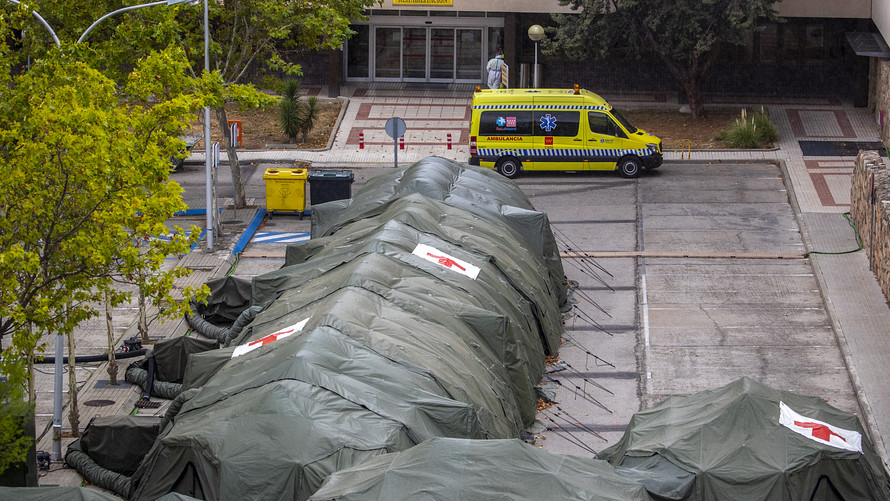 AP
Spanish military tents are set out to be used by hospital patients during the coronavirus outbreak at the Gomez Ulla military hospital in Madrid, Spain, Friday, Sept. 18, 2020. A line of green tents have been installed at the gates of a Madrid military hospital four months after similar structures for triaging incoming patients and lighten up crammed emergency wards were taken down.

Many residents in Madrid will need a reason to leave their neighborhoods and will face limitations on group gatherings even stricter than the ones in place as authorities moved Friday to try to rein in Europe’s fastest-spreading second coronavirus wave.

The long-awaited restrictions affect around 860,000 people, or 13% of the region’s 6.6 million residents, in areas where one of every four new virus infections are being detected, regional chief Isabel Díaz Ayuso announced at a news conference.

The areas are also the poorest, more densely populated, and have a prevalent virus incidence above 1,000 cases per 100,000 for the past 14 days. The same rate for the whole of Europe, including the U.K., stood at 76, according to the European Centre for Disease Prevention and Control, or ECDC.

The Madrid region’s deputy health chief had said earlier this week that the stricter restrictions would be “selective lockdowns,” but Díaz Ayuso said Friday that she wanted to avoid any mandatory stay-at-home orders.

“We need to avoid economic disaster,” she said. “It’s not the time to confine all citizens, but rather to apply measures in areas we have perfectly identified.”

Under the new rules, parks will be closed, shops and restaurants will need to work at 50% of their capacity and residents will need to justify that they are on their way to work, study or see a doctor in order to leave the targeted areas. Nearly 1 million quick antigen tests will also be performed, authorities said.

The Spanish capital’s rate of transmission is more than double the national average, which already leads European contagion charts. On Friday, it reported more than 5,100 new infections for the city and its surrounding area, 200 more than the day before. The region’s hospitals were treating 2,907 people (17% of the total hospital capacity) including nearly 400 in intensive care units, or 41% of those beds.

As yet another sign of how, slowly but steadily, beds are being taken up by COVID-19 patients, a line of green empty tents labelled with red crosses stood empty on Friday at the gates of Madrid’s Gómez Ulla military hospital.

Over 640,000 people have tested positive for the new virus in Spain, more than in any other European country, and at least 30,400 have died since the beginning of the pandemic, according to the Health Ministry’s official data.

In the capital, despite curbs on nightlife, outdoor smoking and limiting all group interaction to a maximum of 10 people — and to six starting from Monday — COVID-19 cases have continued stubbornly on the rise. The incremental measures haven’t prevented the outbreaks from spreading widely, something that experts blame on looser observance of self-protection and, especially, a failure in diligent tracing of contacts of positive cases.

Some experts warned that more action was needed.

“They are overthinking it. Action is needed,” said Daniel López Acuña, who was director of emergencies at the World Health Organization, adding that the measures were “tardy and insufficient.”

Rafael Bengoa, another former WHO official, said that with widespread community transmission, “is possible that very soon a full lockdown will be needed.”

“It seems like we are learning too slow — we haven’t acted energetically enough,” Bengoa told Cadena SER radio.