Bloomberg News/Landov
A pumpjack in the Bakken Formation in North Dakota.

“One of the things that the Saudi incident seems to have exposed is how vulnerable their energy production facilities are,” said Michael DePalma, portfolio manager of High Yield ETF /zigman2/quotes/208474038/composite HYLD +1.19% , in an interview with MarketWatch.

“They have one of the strongest militaries in the region. Yet, their energy infrastructure is surprisingly vulnerable. That caught a lot of investors by surprise,” he said. “That’s one reason the U.S. shale producers are doing well.”

Energy names accounted for eight out of the top 10 junk-bond gainers Monday, snapping up a 30.4% share, or $2.8 billion, of the session’s total U.S. high-yield bond trading activity, according to trade and pricing data platform MarketAxess. 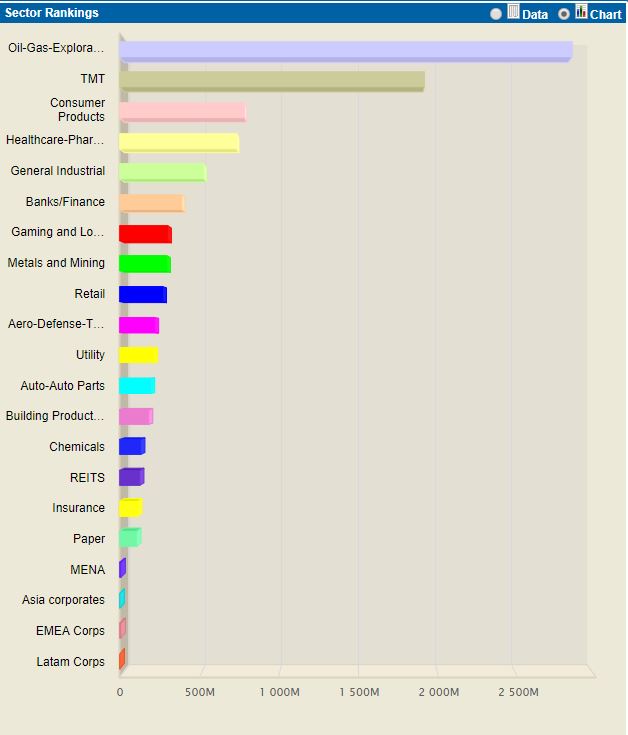 SemGroup Energy was the biggest high-yield energy gainer after the Tulsa-based pipeline and refinery operator said it would be acquired by rival Energy Transfer /zigman2/quotes/210213433/composite ET +3.65%  in a cash-and stock deal valued at about 5.1 billion, including debt.

The Saudi facility attack at least temporarily knocked out about half of the kingdom’s output, or an estimated 5% of the world’s crude production. The shock sent oil futures soaring, giving West Texas Intermediate crude for October delivery , the U.S. benchmark contract, its biggest one-day percentage climb since September 2008, at $62.90.

Check out : These oil stocks rise the most after supply disruption in the Middle East

Energy names have been about 48% of the total $37 billion of defaulted U.S. high-yield bonds and loans so far this year, according to J.P. Morgan data.

Weatherford International  has been the biggest of the year after it defaulted on a combined $6.5 billion of high-yield bonds and loans in July.

While shale producers could benefit from protracted oil production delays out of Saudi Arabia, it remains unclear how long it will take Saudi Arabia to resume production at its impacted facilities, or whether it will further escalate tensions in the Middle East. Its Ministry of Foreign Affairs said in a statement late Monday that the weapons used in the attack were Iranian, and that investigations are ongoing.

“Information about the duration and extent of the disruption to Saudi oil supply is still forthcoming, making it challenging to estimate the potential price impact of the weekend’s attacks,” a team of Goldman Sachs analysts led by Karl Blunden wrote in a client note Monday.

But Blunden’s team also said crude prices could “rise quickly above” $75 a barrel should Saudi Arabia announce that its outages would last more than six weeks. However, if prices reach $76 per barrel, the team expects the move to trigger output from the U.S. Strategic Petroleum reserves, or SPR, to prevent even further price hikes.

President Donald Trump said in tweets over the weekend that the U.S. would tap oil from the SPR “if needed, in a to-be-determined amount.”

DePalma said that while Monday’s oil price increases and bounce in debt backed by high-yield shale producers weren’t shocking, the bigger worry would be a protracted dispute that tangles already tense oil tanker traffic in the Strait of Hormuz.

””Anything that impedes the flow of oil through Strait of Hormuz, that can’t necessarily be a positive for economic growth globally,” he said.