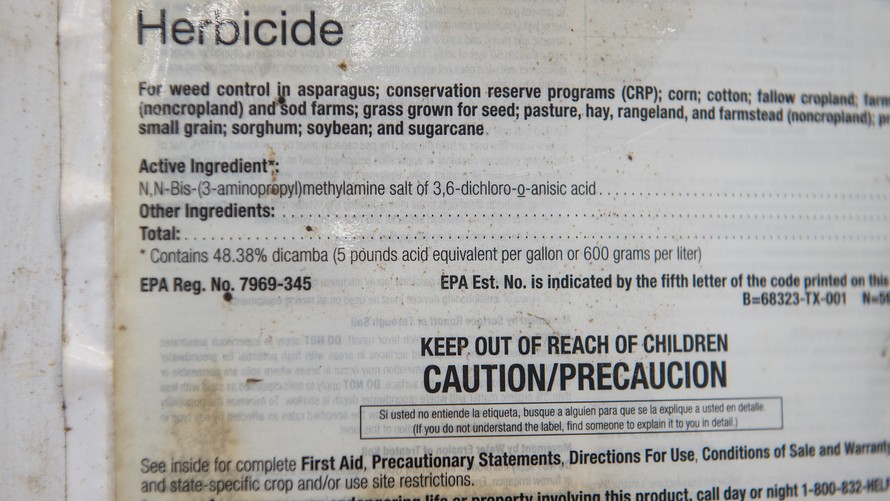 AFP/Getty Images
The label of the herbicide Engenia shows the presence of dicamba as one of its ingredients in Gregory, Ark., in November 2017.

SAN FRANCISCO — The federal government must revoke its approval of a widely used weed killer that has damaged other crops and turned neighbor against neighbor in some farm communities, a federal appeals court in California ruled.

Dicamba is used on tens of millions of acres of soybeans and cotton nationwide “but its toxicity is not limited to weeds,” the 9th U.S. Circuit Court of Appeals ruled Wednesday, the San Francisco Chronicle reported.

Companies that make dicamba were licensed in 2016 and the Environmental Protection Agency renewed the license for two years in 2018. The approval involved a newer version designed to be sprayed on genetically modified soybeans and cotton.

Environmental and food safety groups had sued to block approval.

The EPA approval came with restrictions on when dicamba could be sprayed to avoid it being carried by wind or other conditions onto neighboring fields where crops couldn’t survive it.

In the appellate ruling, Judge William Fletcher wrote that the EPA overstated the protections and understated or ignored the environmental and economic risks.

Indiscrimate, crop-killing use of the herbicide has “torn apart the social fabric of many farming communities,” the ruling said, noting that an Arkansas farmer was shot and killed in an argument over the weed killer in 2016.

The nonprofit Center for Food Safety, one party in the lawsuit, praised the verdict.

It is “a massive victory for farmers, the environment, and the rule of law. And a day of reckoning for Monsanto and the Trump administration,” said George Kimbrell, an attorney with the group.

The ruling was criticized by Bayer /zigman2/quotes/210533053/delayed DE:BAYN +3.87%  , the German parent company of Monsanto Co., which makes the herbicide.

“The EPA’s informed science-based decision reaffirms that this tool is vital for growers and does not pose any unreasonable risks of off-target movement when used according to label directions,” the company said.

In February, Bayer  and another dicamba manufacturer, BASF /zigman2/quotes/204280060/delayed DE:BAS +1.93%  , were ordered to pay $265 million to a Missiouri peach farmer who said the herbicide drifted from nearby cotton fields and damaged thousands of his trees.