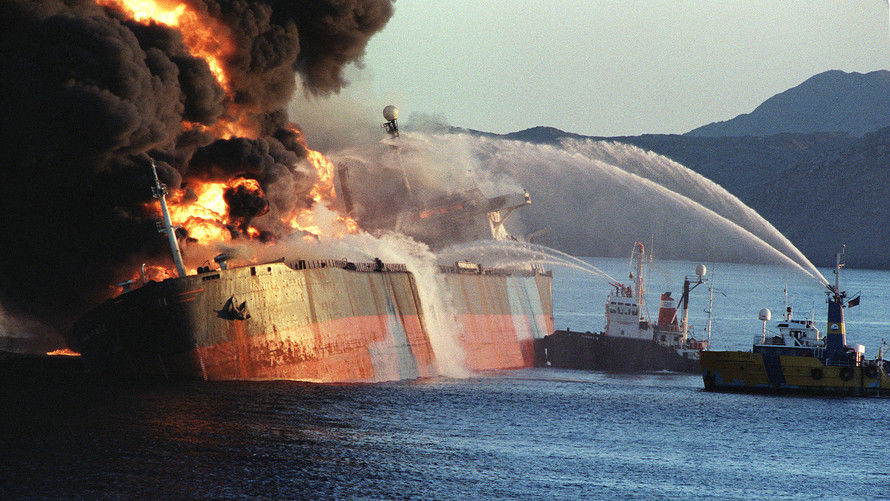 AFP/Getty Images
The Singapore-flagged Norman Atlantic stands ablaze as it approached the key waterway Strait of Hormuz in 1987.

The second alleged attack on tankers near the Strait of Hormuz in roughly a month has heightened concerns about oil security in the region and tensions between the U.S. and Iran, leaving at least one analyst suggesting an escalation in incidents could add $7 to the price per barrel.

Other analysts, including those watching gasoline prices, stress that it’s too soon for motorists to be alarmed about a surge in pump prices.

Two oil tankers near the key shipping choke point between the Persian Gulf and Gulf of Oman were apparently attacked Thursday, leaving one ablaze and adrift, according to Associated Press. That followed damage to two tankers from Saudi Arabia, and one vessel each from Norway and United Arab Emirates, about a month ago that was blamed on “sabotage” attacks, as well as armed-drone attacks in May that halted pumping at a key Saudi oil pipeline.

The latest attack in the Gulf ‘definitely opens a new chapter and new worry going forward for at least the next several weeks.’

The latest attack in the Gulf “definitely opens a new chapter and new worry going forward for at least the next several weeks,” said Patrick DeHaan, head of petroleum analysis at GasBuddy.

“Targeting oil tankers that belong to politically and militarily weak countries, laden with only Saudi or Emirati oil, in the least protected area of the region, at a specific time in a cloudy weather, is not a coincidence,” independent energy expert, Anas Alhajji, a former chief economist at NGP Energy Capital Management, told MarketWatch. “These are sophisticated attacks that are planned by state actors. The level of information and planning needed cannot be done by individuals or independent groups.”

One of the vessels involved Thursday has been preliminarily identified as involved as the MT Front Altair, a Marshall Islands-flagged crude-oil tanker, the AP reported, while the other is operated by a Japan-based company, according to The Wall Street Journal.

“The irony is, not only Saudi and UAE oil is targeted, but even those in Asia who decided to stop importing from Iran,” said Alhajji. “These attacks will not only raise the political and insurance premium, they will lower supplies too,” so there’s a “triple-layer impact.”

It’s difficult to measure just how much of a price impact this will have on oil, but in the event of further escalation, prices may climb as much as $7 a barrel, Alhajji said.

Many uncertainties prevail, however. “It remains unclear who the actors are behind the recent spate of tanker attacks in the Gulf of Oman,” said Cailin Birch, global economist at The Economist Intelligence Unit. “Iranian authorities will continue to deny responsibility, either directly or indirectly through proxies. Houthi rebels fighting Saudi forces in Yemen are also suspected of being behind the attacks.”

“Given the lack of clear information, there is a risk that the U.S. government will interpret the recent attacks as a potential sign of Iranian aggression in the region; the national security advisor, John Bolton, indicated as much after the attacks that occurred last month,” she said. “U.S.-Iran tensions are already running high as Iran’s deadline to stop complying with some aspects of its nuclear agreement, unless European countries help it to maintain exports, approaches in the next 30 days.”

For now, however, oil prices have been paring back some of their earlier gains Thursday to trade off the session’s best levels.

The latest attacks “may fall off the radar, but senses are definitely heightened for now,” said DeHaan. This isn’t likely to have a lasting price impact at this point, though “as we learn more in the days ahead, there could be some shifts to that.”

DeHaan does not expect to see a rise in gasoline prices based off these tanker attacks. “I do not believe this situation will get out of hand, and there’s definitely no reason for motorists to panic.”

And for now, concerns over a potential slowdown in global energy demand remain in focus for traders.

That’s what’s kept a “like on oil prices,” said Birch. “If the U.S. and China manage to pause the trade war when the two countries’ presidents are due to meet in June, this would buoy economic prospects and allow the supply-side risks in Iran and the Gulf to push oil prices higher.”