China targets soybeans, autos and other products in key swing states, then Trump ups the ante 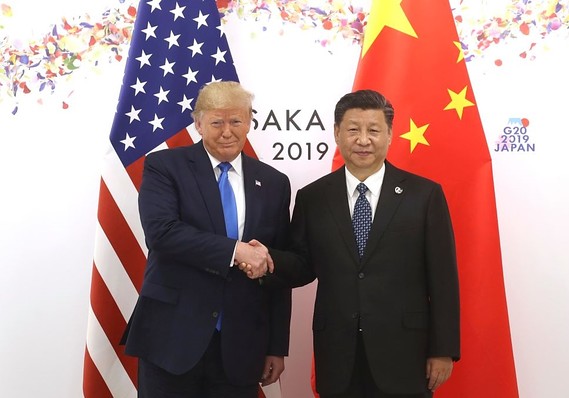 Getty
Chinese President Xi Jinping and President Donald Trump are locked in an impasse over trade.

China and the United States on Friday announced they would raise tariffs on each other, marking the latest volley in a widening trade war that has damaged the global economy and could pose a risk to President Trump’s reelection.

Early on Friday China said it would increase existing tariffs by 5% to 10% on more than 5,000 U.S. products, including soybeans, oil and aircraft. A 25% duty on American-made cars would also be reinstituted. The value of these products is estimated by the Chinese Commerce Ministry to total around $75 billion.

Trump responded after financial markets closed by saying he would raise current U.S. tariffs. A 10% duty on $300 billion in Chinese goods will be raised to 15% in September while a 25% tariff on $250 billion in imports would be increased to 30% in October.

The back and forth reflects the latest escalation in a trade dispute between the world’s two largest economies that began more than a year ago when the U.S. slapped tariffs on hundreds of billions of dollars of Chinese imports amid accusations of unfair trading practices. Trump contends China has been taking advantage of the U.S. for decades.

The U.S. imports four and a half times as many goods from China than the other way around, but the Chinese government, as it’s done in the past, appears to be singling out American-made products largely in Midwestern states that Trump carried in the 2016 election and that he needs to win reelection.

Iowa is the largest producer of soybeans, for example, and Michigan and Ohio have the biggest concentration of auto manufacturing. Trump carried all three states in the last election, but he barely won in Michigan.

The two countries continue to negotiate, but Trump and some of his advisers believe China might be trying to wait out his administration and bank on a Democrat winning the presidency in 2020.

Just two months ago, trade talks appeared to be back on track after Trump met his Chinese counterpart, President Xi Jinping, at a gathering of world leaders in Japan in an effort to defuse tensions.

Yet frustrated by the continuing impasse, Trump in August suddenly announced a new round of tariffs on Chinese products, angering the Asian country’s leaders and drawing vows of a tit-for-tat response. The fallout continued on Friday

The new U.S. tariffs are also set to take effect in next two months. China has scheduled its retaliatory duties to go into effect around the same time.

“The recent rise in nationalist, patriotic behavior in China means that it would have been impossible for the Chinese government not to react to the latest U.S. tariffs,” said Agathe Demarais, global forecasting director at the advisory firm The Economist Intelligence Unit.

Looked at in isolation, the U.S. would seem to have the upper hand against China. The U.S. exported just $120 billion in goods to China in 2018 and imported $539 billion in products made in China.

Many countries around the world are closely tied to the Chinese economy, however, and the damaged caused by the U.S. trade fight has radiated out and harmed others.

A slowing global economy, in turn, has harmed U.S. exporters and manufacturers. A new survey of manufacturing executives, for instance, suggests the sector contracted in August for the first time since the end of the 2007-2009 Great Recession.

The threat to the U.S. economy from the trade dispute has been viewed as severe enough by the Federal Reserve to spur the central bank to cut already low interest rates in July. And the Fed is widely expected to cut rates again in September.

“Trade policy uncertainty seems to be playing a role in the global slowdown and in weak manufacturing and capital spending in the United States,” Fed Chairman Jerome Powell said Friday in a widely anticipated speech in Jackson Hole, Wy.

The Fed was not expected to take any action at its annual retreat, drawing more criticism from a president who’s been bashing the central bank for months. “My only question is, who is our bigger enemy, Jay Powel [sic] or Chairman Xi?” he tweeted.

Trump also called on American companies to stop investing or manufacturing products in China, including relocating operations back to the U.S. “We don’t need China and, frankly, would be far better off without them.”

The U.S. Chamber of Commerce reiterated its long-standing concerns about China’s unfair trade practices,” but it called the U.S.-China trade relationship “for the most part productive” and urged the White House to tamp down the tensions.

“Time is of the essence. We do not want to see a further deterioration of U.S. China relations,” said Myron Brilliant, the chamber’s head of international affairs, said in a statement.