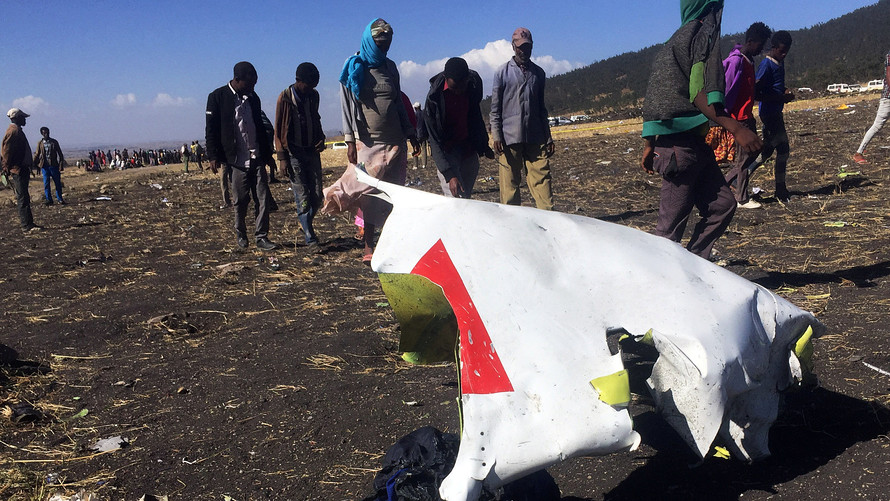 Reuters
People walk past a part of the wreckage at the scene of the Ethiopian Airlines Flight ET 302 plane crash, southeast of Addis Ababa, Ethiopia, on March.

NEW YORK — Just days after a Lion Air Boeing 737 Max nosedived in Indonesia and killed all 189 people aboard, an Ethiopian Airlines pilot began pleading with his bosses for more training on the Max, warning that crews could easily be overwhelmed in a crisis and that one of their planes could be the next to go down.

“We are asking for trouble,” veteran pilot Bernd Kai von Hoesslin wrote in a December email obtained by The Associated Press, adding that if several alarms go off in the cockpit at once, “it will be a crash for sure.”

That prediction proved all too accurate.

What Ethiopian Airlines did in response to his warnings is unclear, and whether it made any difference is a matter of dispute. But within weeks, an Ethiopian Max indeed went down, killing all 157 people on board. It slammed into the ground amid a flurry of alarms as the pilots struggled to control a malfunction in the automatic anti-stall system.

While that system has gotten most of the scrutiny in the two Max crashes five months apart that have led to a worldwide grounding of the planes, the concerns raised by von Hoesslin have added to a debate on the role pilot error played and whether Ethiopian’s pilots were as prepared as they could have been to avert disaster.

Von Hoesslin, a Canadian citizen who resigned from Ethiopian last month, argued in three emails to senior managers that after the anti-stall system came under suspicion in the first crash, crews flying the airline’s five Max jets should have been given more information and training on how the system worked and drilled on the steps to override it if it faltered.

The Max’s system, called MCAS, for Maneuvering Characteristics Augmentation System, automatically pushes the plane’s nose down when it is at risk of stalling. It misfired in both fatal crashes, with pilots losing control of the plane as they fought against it.

According to the email chain obtained by the AP, Ethiopian responded to the Oct. 29 Lion Air crash with a few emails to pilots detailing bulletins from the U.S. Federal Aviation Administration and Boeing /zigman2/quotes/208579720/composite BA -0.17%   on what do if the anti-stall system malfunctioned. Other Ethiopian pilots who spoke to the AP say those emails required no signoffs that pilots actually read and understood the directives, and no mandated additional training.

“Ethiopian Airlines is a rapidly expanding airline and they have extremely inexperienced crews,” von Hoesslin said in documents obtained by the AP. “You need to spoon-feed them the information and make sure they understand.”

To underscore his point, von Hoesslin made a video shortly after the Ethiopian crash in which he quizzed a Max pilot on a Boeing list of warning signs on the stall system that crew members were required to commit to memory. That video, obtained by AP, shows him going blank on most of it.

“You have to have confirmation that they opened it, that they read it and that they understood it,” von Hoesslin said in a document obtained by the AP. “They should have done a little online test with 10 questions. You don’t pass until you get the 10 questions.”

Ethiopian Airlines tweeted Wednesday that “the source of these false allegations is a disgruntled former employee ... who has left the airline after many administrative problems.”

Von Hoesslin’s lawyer, Darryl Levitt, issued a statement saying the pilot was not fired but “resigned due to legitimate concerns he had raised that he felt were not adequately addressed.” He added that von Hoesslin will be cooperating with regulators and authorities “with his sole objective of contributing to make air travel safe.”

Ethiopian has said that the requirements for warning and training Max pilots after the Lion Air crash were set by the FAA and Boeing and that their directives were used to “brief all our pilots” and incorporated into flight manuals.