LONDON (MarketWatch) — European stock markets ended lower on Wednesday after unions in Greece called a general strike and as investors worried about a potential reduction in central-bank stimulus. 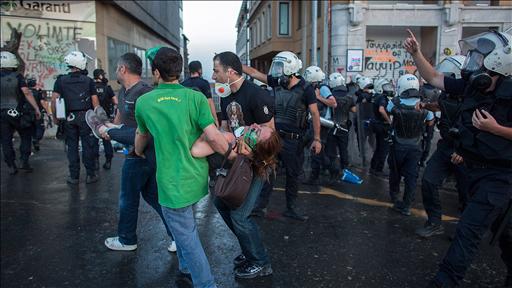 Turkish police moved to recapture a landmark square in Istanbul.

The downbeat trading day marked the third straight session of losses, as renewed uncertainty about Greece and concerns about central-bank liquidity spooked investors. Three weeks ago the index had climbed to a multiyear high boosted by aggressive easing from central banks, but comments from U.S. Federal Reserve Chairman Ben Bernanke about potential tapering of quantitative easing sparked a correction.

“It’s like any other drug. It takes more to work the more you get and has an effect of dependency. It becomes more difficult to come off,” he added. “What we need to turn markets around is an affirmation from Bernanke that QE will be withdrawn at some point, but not now.”

Worries over Greece were also back in the spotlight on Wednesday, after equity index provider MSCI Inc. /zigman2/quotes/202905332/composite MSCI +1.99%  lowered the country to emerging-market from developed status. Adding to the country’s woes, the two biggest labor unions called a 24-hour general strike starting on Thursday in protest over the government’s shutdown of its state broadcaster, the Hellenic Broadcasting Corporation (ERT).

On Tuesday, the index dropped 4.7% on reports the country will miss its asset-sale goal by about 1 billion euros ($1.3 billion) this year and will have to ask lenders for a lower target.

Industrial production surprises to the upside

The only material growth impulses came “from Germany and France while the rest of the major euro-area economies recorded much more lackluster figures,” said James Ashley, senior economist at RBC Capital Markets, in a note.

“In other words, of course it is positive news that the euro-area industrial sector has now managed to eke out three months of growth, but the heavy reliance on a single economy leaves the region vulnerable to any slowdown that might befall Germany. But, for now, we’ll take what we can get and localized growth is better than no growth,” he added.

In Germany, the constitutional court continued its two-day hearing about the ECB’s bond-buying program. Executive board member of the ECB Jörg Asmussen said at the hearing on Tuesday he was “firmly convinced that introducing the OMT program was the right thing to do to ensure price stability in the euro area. After all, a currency can only be stable if its continued existence is not in doubt.”

Volkswagen
Volkswagen' shares drop after a recall in Australia.