Terrence Horan/MarketWatch
How to make good profits from bad habits

• Rolling the dice on casino stocks
• Raise a glass to 3 bulletproof booze players
• Can fast-food stocks nourish returns?
• Light up your portfolio with tobacco stocks
• Does it pay to be a sinner?
• Stay away from sin
• Investing in sinners and saints
/conga/story/2013/05/trading-strategies.html 260661

The index traded in negative territory for most of the day, but was sent higher in late trade, after Bernanke warned that premature monetary tightening could strangle the economic recovery, easing worries that the central bank was close to ending its $85-billion-a-month bond-buying program. Cheap liquidity from central banks have recently sent global stock markets to multiyear highs and any changes to such easing policies could create nervousness in financial markets.

In testimony to the Joint Economic Committee of Congress Bernanke said that “a premature tightening of monetary policy could lead interest rates to rise temporarily, but would also carry a substantial risk of slowing or ending the economic recovery and causing inflation to fall further.”

When asked about when the Fed will slow down asset purchases, Bernanke says it could come in the “next few meetings,” taking stocks off their intraday high.

“It seems like Bernanke has confused the markets. The initial take on the actual speech was that he was more dovish, saying it would be premature to have the discussion [about ending QE], but then in the Q&A session he said they could do it within the next months. That created a sense of confusion, which I’m sure he wasn’t shooting for,” said Tom Porcelli, chief U.S. economist at RBC Capital.

“I think that the market got the Q&A wrong. The caveat was that if data start to improve the Fed could end QE, but it they don’t improve it will continue with asset purchases. There is nothing new in this. He has been talking about this for quiet a while. Markets just wanted to focus on that bit from the Q&A session,” he added. RBC Capital expects the Fed to taper off the asset purchases in fourth quarter of the year.

The comments from the chairman came a day after two other voting members of the Federal Open Market Committee spoke, with St. Louis Fed President James Bullard saying there isn’t a case for scaling down the pace of asset purchases as long as inflation is so low.

Separately, New York Fed President William Dudley said the uncertain economic outlook makes it difficult to tell if the next adjustment to the Fed’s QE program will be up or down.

After the European market close on Wednesday, the central bank will release minutes from its April 30-May 1 meeting, which may provide more insight into the Fed’s stance on quantitative easing. 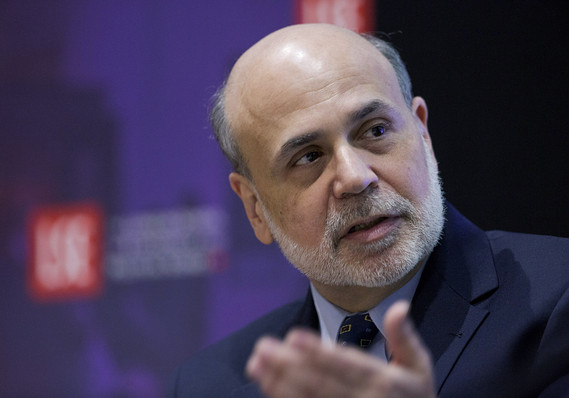 Enlarge Image
All eyes rest on Bernanke on Wednesday as he testified before Congress.

Back in Europe, the U.K.’s FTSE 100 index /zigman2/quotes/210598409/delayed UK:UKX -0.36%  closed at the highest level since December 1999, after the International Monetary Fund called for new growth measures and less austerity to help the country’s economy.

Also in the U.K., minutes from the Bank of England’s latest policy meeting showed the Monetary Policy Committee voted unanimously to keep interest rates unchanged at a record low 0.5%. Additionally, three out of the nine members voted in favor of increasing the bank’s asset purchases by 25 billion pounds ($38 billion) to a total of £400 billion.

Shares of Metro AG  jumped 10%, after Morgan Stanley turned buyers of the shares for the first time in nearly a decade, saying risks are solidly skewed to the upside. The Morgan Stanley analysts lifted Metro to overweight from equal weight.

Outside the major indexes, shares of Roche Holding AG /zigman2/quotes/206324342/delayed CH:ROG -0.35%  gained 3%, after Citigroup lifted the drug maker to buy from neutral.