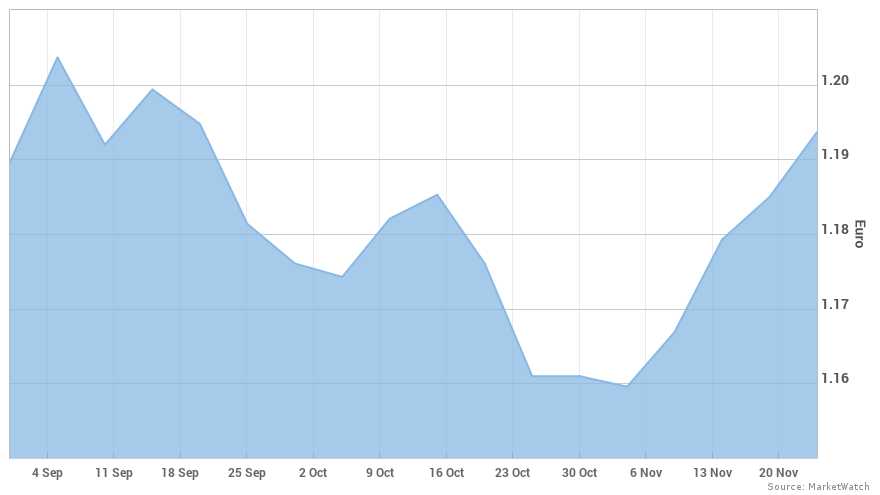 The euro stepped to two-month high vs. the greenback on Friday

German stocks snapped a two-session skid Friday, getting a lift as business optimism in the region’s largest economy climbed to a record and as one of Germany’s major political parties cracked the door to possibly breaking a political impasse.

Health-care and oil-and-gas stocks led the declining sectors on the pan-European index. But tech, financial and basic-material shares closed up.

A stronger euro can be a headwind to shares of European exporters, as holders of other currencies may find it more expensive to buy goods from European companies.

What’s driving markets: Businesses in Germany have been upbeat about their prospects this month and for the months ahead. German think tank Ifo said Friday its business-climate index rose to a record high of 117.5 points, surpassing expectations.

“Germany is on track for an economic boom,” said Ifo president Clemens Fuest in the report.

The euro extended gains following the Ifo report. That added to its rise on Thursday after an upbeat reading on eurozone services and manufacturing activity and a finding of higher growth in German gross domestic product.

The bulk of responses to Ifo survey came before the collapse of talks to create a coalition to form a German government on Sunday. But on Friday, Germany’s Social Democrats reportedly dropped their hard refusal to set up another Grand Coalition to govern alongside Chancellor Angela Merkel’s Christian Democrats, raising anticipation that the country’s political crisis may be resolved.

Trading volumes were likely thin on Friday as U.S. markets were on a shortened schedule following Thursday’s Thanksgiving Day holiday.

What strategists are saying: “The news that Angela Merkel and her CDU-CSU party are set to meet with their former Social Democrat coalition partners acted as a pick-me-up for the euro,” said Connor Campbell, financial analyst at Spreadex, in a note.