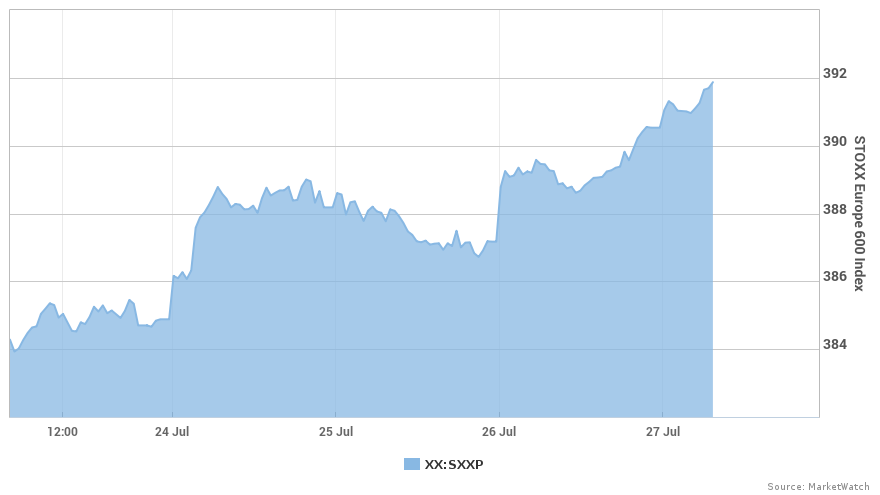 The Stoxx 600 is having it’s best week since March.

European stocks on Friday finished with their strongest weekly gain in more than four months, with Carrefour’s shares surging as the French retailer added to a batch of better-than-expected earnings reports that have helped push regional equities to a six-week high.

For the week, the pan-European benchmark rose 1.7%, the best weekly rise since March 9 when the index surged 3.1%.

European stocks extended Thursday’s climb that took German stocks to a five-week high. Those moves came after European Commission President Jean-Claude Juncker and U.S. President Donald Trump said they would work on tamping down trade-related tensions between the U.S. and the European Union. The two said they’ll move toward “zero tariffs” and “zero subsidies on non-auto industrial goods,” among other actions.

Investors on Friday sifted through a new batch of earnings reports that included stronger-than-expected operating profit at French supermarket chain operator Carrefour SA. Its report spurred the biggest percentage leap in the company’s shares since February 1999, according to FactSet data.

The busy week of earnings reports and developments on the trade front was capped by the first reading of second-quarter GDP for the U.S. The world’s largest economy expanded by 4.1%, slightly below average economists’ estimates for 4.2% but the fastest pace in nearly four years. After that report, the University of Michigan’s consumer sentiment index fell in July to a six-month low.

Read: Even if short on specifics, the Trump-Juncker agreement is significant

“With around 40% of market cap having reported second-quarter results, European [per-share earnings] growth has accelerated to 6% year-over-year, up from 0% in Q1,” said Tom Pearce, European equity strategist at UBS, in a note published Friday.