European stocks pull back after three weeks of gains

LONDON (MarketWatch) — European stocks dropped Monday, pressured by a selloff on Wall Street that left the Nasdaq Composite with its worst drop in two months.

The Stoxx Europe 600 /zigman2/quotes/210599654/delayed XX:SXXP +0.46%  fell 1.4% to 334.96, marking the first loss for the index in nine sessions. The move followed Friday’s slide in U.S. stocks, led by heavy selling in so-called momentum stocks such as biotechs and Internet companies. 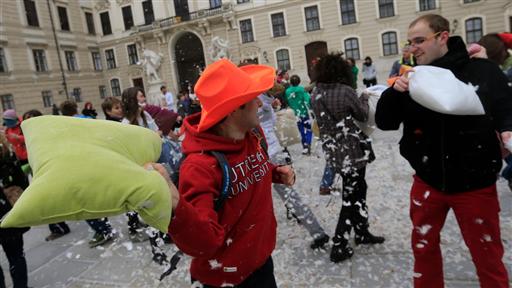 Dozens of people participated in a mass pillow fight on Saturday at the Hofburg Palace in Vienna, Austria as part of the World Pillow Fight Day. Photo: Getty Images

The worst price performer Monday on the pan-European index was Bouygues SA /zigman2/quotes/202035785/delayed FR:EN +0.12% , falling 6% for its biggest decline since late-August 2012, according to Factset data. The slide came after the company’s bid for Vivendi SA’s /zigman2/quotes/202179234/delayed FR:VIV +1.15%  French mobile unit SFR was rejected in favor of an offer from Altice SA. Vivendi shares, meanwhile, ended up 0.3%, but settled off session highs.

European stocks on Friday rose following a German newspaper report that the European Central Bank had modeled the impact of 1 trillion euros ($1.37 trillion) of quantitative easing, raising the prospect the bank may take action to fight low inflation. The Stoxx Europe 600 ended last week with its third consecutive weekly advance.

For Europe, the risk of quantitative easing and lower interest rates “would seem to encourage equity market flows,” but “negative sentiment is prevailing” in the region, said Brown Brothers Harriman in a report Monday.

An ECB official said Monday the bank is sketching out plans for asset purchases if they are warranted, but an immediate program launch doesn’t appear likely. The risks of inflation and deflation “are more or less level in EMU area which means that we do not see an imminent risk of deflation. However, we are ready to prepare for such a situation,” Yves Mersch, a member of the bank’s executive board, was quoted as saying by Reuters.

Meanwhile, ECB Governing Council member Ewald Nowotny, speaking on the sidelines of a conference in Vienna, said he would prefer asset purchases to focus on asset-backed securities rather than government bonds, The Wall Street Journal reported.

The German DAX 30 /zigman2/quotes/210597999/delayed DX:DAX +0.46% was shoved sharply lower, down 1.9% to 9,510.85. German stocks found no relief following a report that the country’s industrial production expanded 0.4% in February compared with the previous month, above a consensus estimate of 0.3% growth.

Shares of HeidelbergCement AG /zigman2/quotes/202418791/delayed DE:HEI +0.19%  in Frankfurt had been higher following news that cement maker Lafarge SA and Switzerland’s Holcim Ltd.  plan to merge into the world’s biggest building-materials group. But HeidelbergCement shares eventually turned lower, by 2.6%, leaving none of the DAX’s components with gains for the session.

Holcim plans to tender for Lafarge, exchanging one Holcim share for each Lafarge share. The deal for the new company, to be called LafargeHolcim, is expected to close in the first half of 2015. Shares of Holcim /zigman2/quotes/200284171/delayed CH:HOLN +0.27% rose 1.6%.

In other movers Monday, Roche Holding AG /zigman2/quotes/206324342/delayed CH:ROG -0.56%   fell 1.9% after the Swiss cancer-drug specialist said it has acquired privately held Massachusetts-based IQuum in a deal worth $450 million. Roche will pay IQuum shareholders $275 million upfront and up to $175 million on products hitting milestones.