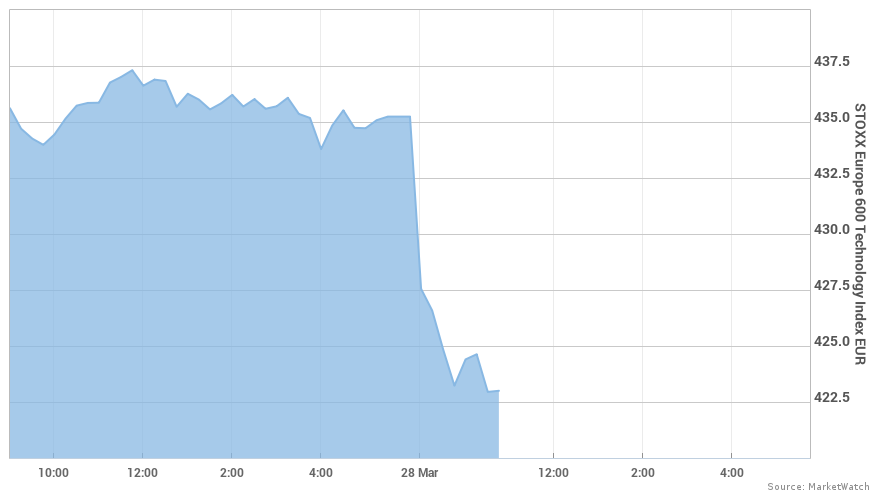 The Stoxx Europe 600 Tech Index was under pressure Wednesday.

The Stoxx Europe 600 index (STOXX:XX:SXXP) ended up 0.5% to 369.26, led by the utility and health care sectors. But the technology sector fared the worst. The index on Tuesday climbed 1.2%, driven by easing concerns about a global trade war.

The health-care sector emerged as a bright spot in Wednesday’s trade, lit up as Shire PLC shares   rallied as much as 26% after Japanese biopharma Takeda Pharmaceutical Corp. (TKS:JP:4502)  said it’s considering making an offer for its rival. Shire shares closed up 15.6%, the strongest percentage gain since June 2014.

European equities had dropped more than 1% earlier in the session following a rout in tech stocks on Wall Street Tuesday. That slide left the Nasdaq Composite Index (AMERICAN:COMP) down 2.9% for Tuesday and while losses were less pronounced in the follow-up U.S. session on Wednesday, the tech-heavy Nasdaq was still in the red.

On Wednesday, the Stoxx Europe 600 Technology Index (STOXX:XX:SX8P)  was dragged down 1.8%, its worst session since March 22, according to FactSet data.

Investors dumped tech-sector shares, which have been at the forefront of Wall Street’s run higher for more than a year, on various regulatory concerns. That included developments for electric car maker Tesla Inc. (NAS:TSLA)  and news that the U.S. is considering a ban on Chinese investment in certain sensitive technologies.

Nervousness among investors have led many to flock to the perceived safety of bonds, sending prices higher and yields lower. The yield on Germany’s 10-year bund on Wednesday fell below 0.5% for the first time since January, according to Tradeweb data. Lower bond yields helped interest-rate sensitive utility stocks gain ground Wednesday.

“Stock markets are likely to remain explosively volatile and wildly unpredictable amid the ongoing trade drama between the U.S. and China,” said Lukman Otunuga, research analyst at FXTM, in a note.

“While easing fears of a trade war initially supported risk sentiment, reports that the Trump administration may crackdown on Chinese investments into U.S. companies rekindled jitters. With the U.S.-China trade developments being a key theme driving markets, investors should expect the unexpected,” he said.

Unilever PLC (LON:UK:ULVR)  leapt 4.7% after UBS upgraded the consumer products heavyweight to buy from neutral and said a roughly 17% drop in its shares since October “creates a compelling entry point,” for investors.