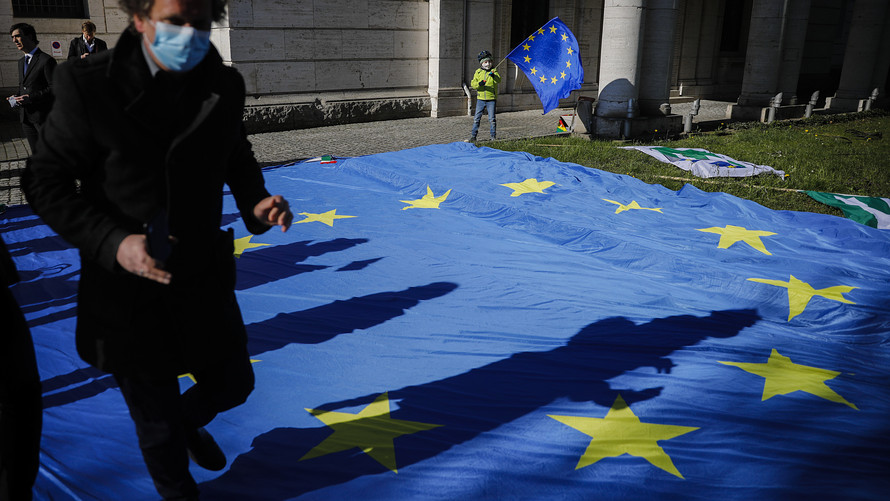 Associated Press
A man with a face mask and a child with an European flag attend an event of the Pulse of Europe movement to collect signatures for more support for Italy during the coronavirus outbreak, in front of the Italian embassy in Berlin, Germany.

European stocks paused on Thursday, as data revealed the coronavirus lockdowns are causing unprecedented pain to the Continent’s services sector.

The latest readings on the European economy were grim. The IHS Markit flash eurozone services purchasing managers index fell in April to a record-low reading of 11.7, below expectations of 24 on a scale where any reading below 50 indicates a deteriorating economy. IHS Markit said the readings of both services and manufacturing PMI are indicative of the eurozone economy contracting at a quarterly rate of approximately 7.5%.

“April saw unprecedented damage to the eurozone economy amid virus lockdown measures coupled with slumping global demand and shortages of both staff and inputs,” said Chris Williamson, chief business economist at IHS Markit. “The extent to which the PMI survey has shown business to have collapsed across the eurozone greatly exceeds anything ever seen before in over 20 years of data collection.”

Traders awaited the latest U.S. jobs figures. Initial jobless claims in the seven days running from April 12 to April 18 probably grew by at least 4 million, with estimates ranging as high as 5.25 million, according to the latest MarketWatch survey of economists.

The European Council is meeting via videoconference, as they deliberate on how to fund the emergency measures worth €540 billion that finance ministers have previously agreed, and whether to allow joint issuance of securities. “European leaders will discuss the Eurogroup proposals for a common policy response to the COVID-19 crisis and will likely ask finance ministers to continue to work on the design of a Recovery Fund to restart the economy, but an agreement on this fund is unlikely, in our view,” said economists at Barclays.

Shares of Unilever /zigman2/quotes/205449809/delayed UK:ULVR -0.31%  slumped 4%, as the Anglo-Dutch household products giant reported flat underlying sales in the first quarter, including a 3.7% downturn from its Asia, Africa, Middle East, Turkey, Russia, Ukraine and Belarus operations. Analysts at Citi said the emerging-markets performance was “way worse than we feared, as the headwinds in China were flagged but we think the distribution and supply chain disruption in India, then spreading to the rest of South East Asia, have destabilized the group faster than we thought.”

Wirecard DE:WDI 0.00%  rose 7%, after saying KPMG’s special investigation into the financial services company’s business activities found no evidence of balance-sheet manipulation and that the full report will be released on Monday.