European stocks ended higher on Tuesday, aided by a pullback for the euro following a weak German business sentiment reading. As well, a drop in the pound after a slowdown in British inflation helped lift U.K. blue-chip stocks.

Check out: Pound could surge in ‘frenetic’ week of Brexit and BOE news, ING says 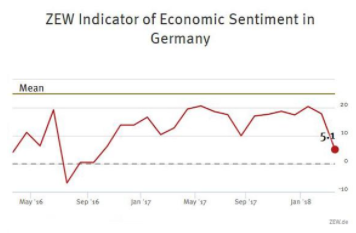 Stocks across the region seesawed during the early part of the session, but returned to positive territory as the euro fell below the $1.23. Euro strength can pressure shares of European exporters as a stronger euro can reduce revenue and earnings made overseas by such companies.

The euro’s decline came after widely watched German sentiment survey from think tank ZEW said its economic sentiment index fell to 5.1 in March, its lowest since September 2016. It was also below forecasts of a 13.1 reading, and down from 17.8 in February.

“Concerns over a U.S.-led global trade conflict have made the experts more cautious in their prognoses. The strong euro is also hampering the economic outlook for Germany, a nation reliant on exports,” said ZEW President Professor Achim Wambach in a statement. “Combined with the experts’ continued positive assessment of the current situation, however, the outlook is still largely positive.”

A drop in the pound also provided support for U.K.-listed multinational companies, with that move made after British inflation in February slowed to 2.7% from 3% in January. That was below the 2.8% rate expected in a FactSet consensus estimate.

The euro and the pound had risen Monday against the U.S. dollar after the EU and the U.K. agreed on the broad terms of a two-year Brexit transition period, but those moved weighed on regional equities.