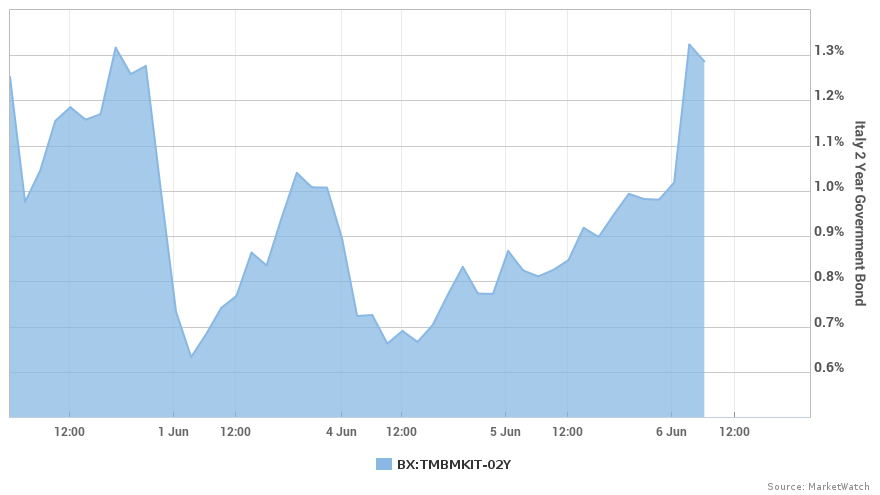 Like other Italian bond yields, the 2-year has whipsawed in recent sessions.

The euro /zigman2/quotes/210561242/realtime/sampled EURUSD -1.0265% bought $1.1775. That was up from $1.1720 late Tuesday, when the shared currency advanced following a Bloomberg report that the ECB will use its June 14 policy meeting to discuss an exit from its quantitative-easing program .

That report was backed up by comments made Wednesday by two ECB officials, who indicated the central bank will start intense discussions about winding down its massive bond-buying program when policy makers meet next week in Riga, Latvia.

“Next week, the Governing Council will have to assess whether progress so far has been sufficient to warrant a gradual unwinding of our net purchases. In making its assessment, it will consider the underlying strength of the euro area economy and the pass-through to wage and price formations,” said ECB Chief Economist Peter Praet in prepared remarks for a speech in Berlin.

Analysts have said Italy, which is saddled with debt, may have a difficult time finding buyers of its bonds when the ECB eventually stops purchasing debt issued by the eurozone’s third-largest economy. Italy’s debt exceeds roughly 130% of the country’s gross domestic product.

The 5 Star Movement and League government won a confidence vote in Italy’s upper chamber of parliament on Tuesday. It now faces a similar vote Wednesday in the lower Chamber of Deputies, which is expected to approve the new administration.

Also check out: Buy the dip with Italy’s stocks? Why you may want to just say no

“To be honest, the next [ECB] meeting by necessity must be ‘live,’ since QE is only slated to continue to run until September, and therefore policy makers will have to use this opportunity to signal whether that is the end of it, or if they plan to extend QE for a little longer. Leaving the market in the dark until July by saying noting is not an option,” said Neil Wilson, chief market analyst at Markets.com, in a note.

“But this hawkish tilt does suggest that volatile Italian bond yields and softer economic data is not going to dissuade the ECB from walking the fine line towards the exit. Markets have pushed back interest-rate-rise expectations until later in 2019, and it is unclear whether QE exit in 2018 equates to a hike in 2019 or 2020,” Wilson said.

WH Smith PLC /zigman2/quotes/201823422/delayed UK:SMWH +0.90% climbed 7.5% as the newspapers- and bookseller said its sales rose 4% in the 13 weeks to June 2, aided by growth at stores at transportation hubs such as train stations and airports.