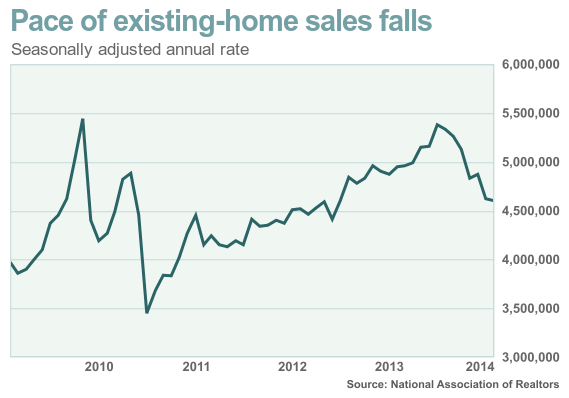 Sales of existing homes ticked down 0.4% in February to a seasonally adjusted annual rate of 4.6 million, the National Association of Realtors reported Thursday. Sales rates have trended down since the summer as rising mortgage rates and home prices cut affordability. Constrained inventory and unusually poor weather may have also played a role in weak buying, the trade group said. 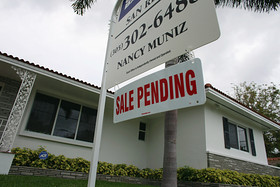 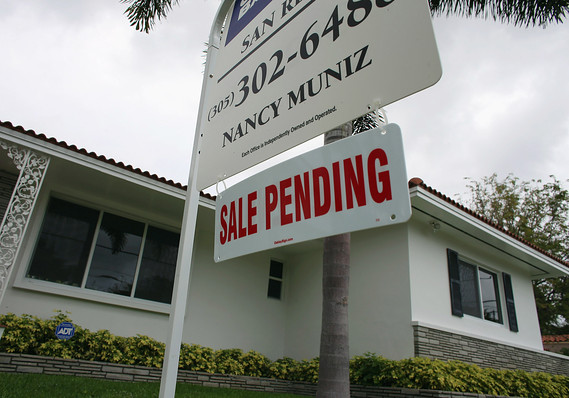 Enlarge Image
A sale pending sign is seen in front of a home on April 29, 2013 in Miami, Florida.

“It’s possible that adverse winter weather, which continued in the Northeast and Midwest in February, depressed buying traffic in those regions. The broader trend is still one of weak underlying demand, as existing home sales have been declining across the country ever since last summer’s interest rate shock,” said Laura Rosner, an economist at BNP Paribas.

Economists had expected the pace of existing-home sales to decline to 4.58 million in February from a rate of 4.62 million in January.

The bad weather conditions make it tough to clearly identify recent underlying trends in home sales, as well as other economic ports. But regional data show that February’s pace of existing-home sales rose in the South and West, and dropped in the Northeast and Midwest.

The silver lining to winter’s cloudy weather is that residential projects and purchases delayed during a particularly tough winter could show up in the spring.

“The inclement weather will prove only a temporary constraint on home sales. As the weather returns to seasonal norms, still-favorable affordability, steady job creation and a gradual loosening in credit conditions will see existing home sales pick up again,” Paul Diggle, property economist at Capital Economics, wrote in a research note.

Just this week, two of the country’s largest builders, Lennar /zigman2/quotes/202536373/composite LEN -0.31%  and KB Home /zigman2/quotes/206220859/composite KBH -2.26% , reported jumping revenue for the fiscal first quarter, and one analyst remarked that the all-important spring selling season for the building industry might get off to a “reasonable start.”

Hope for the housing market

Despite choppy data reports, there’s hope for the housing market in 2014. Some large banks are making it easier to obtain a mortgage , hungry for the revenue lost when refinancing applications plunged last year. Also, pent-up demand remains high, and the pipeline of foreclosures is dropping.

Also, even though rates have climbed, they remain relatively low, and “should serve as a stimulus to people coming back into the housing market,” Federal Reserve Chairwoman Janet Yellen said at a Wednesday press conference. Rates for fixed-rate mortgages, which started rising in 2013 on speculation about the timing of the Fed tapering its bond-buying program, have climbed about one point over the past year, making loans more expensive for borrowers.

Cutting affordability even further, buyers also face rapidly rising prices. The median sales price of used homes hit $189,000 in February, up 9.1% from the year-earlier period, as inventory remained tight, the trade group said. February’s inventory was 2 million existing homes for sale, a 5.2-month supply at the current sales pace. That 5.2-month supply is up from 4.9 months for January — a plus for the market.

“The increased supply of homes for sale could be a positive down the road for activity,” according to a research note from Andrew Grantham at CIBC World Markets.

First-time buyers have had a particularly tough time in this housing market, making up just 28% of existing-home sales last month, compared with a long-term average of 40%.

However, if jobs growth is strong enough, chunks of pent-up demand could be unleashed. With many young would-be buyers stuck living with their parents, the pace of household formation remains slow, and there’s potential for home builders to ramp up construction.

“I do expect housing activity to begin to expand more rapidly,” Yellen said Wednesday in response to a reporter’s question about whether keeping rates low is an effective strategy.

Yellen’s remarks came after Fed officials announced a shift in factors that could prompt a rate hike. After the announcement, shares in major home builders lost ground, with investors concerned about rising rates hurting housing demand. Even before the Fed’s Wednesday announcement, a report this week showed that home builders remain pessimistic this month about sales trends.