Key technical indicators are flashing signals that occur only at the ends of bull markets.

We trade current reality rather than some underlining numbers which may or may not translate into prices. On April 16, we published "Three major signs that the bull market is ending”, and this is our follow-up.

Also, in response to readers' comments that the charts were too small, we're adding a link underneath every chart that will take you to a page where that chart can be viewed in full size. 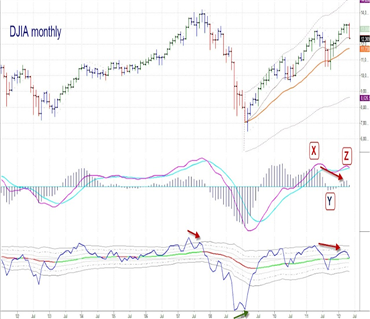 This is a monthly chart of the Dow Jones Industrial Average /zigman2/quotes/210598065/realtime DJIA -1.17% , where every bar represents one month of trading.

As the stock market rallied to its new bull market high in spring of 2011, MACD rallied to its peak "X". It confirmed the strength of the bull and called for higher prices ahead.

By the end of 2011, monthly MACD fell below zero in area "Y"—we call this pattern 'breaking the back of the bull."

Finally, this year, as the stock market rallied to its new peak, MACD topped out at a much lower level in area marked "Z”. This pattern—a higher price accompanied by a lower indicator peak—is called a bearish divergence. These are exceedingly rarely seen on monthly charts, where they occur only at the ends of bull markets, most recently in 2007. 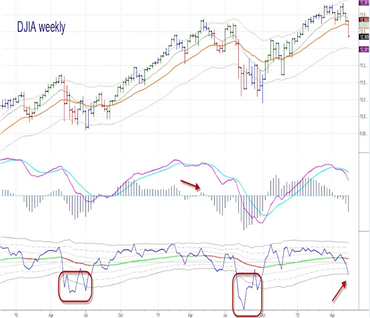 This is a weekly chart of the Dow, with every bar representing one week of trading. Let's focus on Force Index, which we consider the best tool for tracking volume, the force behind piece changes. Notice its patterns during bull market corrections in April-July 2011 and August-October 2011. On both occasions, it traced deep and broad bottoms below its normal channel, creating foundations for the subsequent major up moves.

At the right edge of the weekly chart we see that the Force Index has just reached its lower channel line but isn't anywhere near completing a foundation pattern that could support a serious up move. If the pattern established over many years is to continue, we can expect a deeper decline, pushing Force index lower, where it can begin its bottoming work.

The stock market runs on a two-party system: bulls and bears. The job of a technical analyst isn't to forecast the future but to estimate the relative power of bulls and bears and trade on the side of the dominant group. That is why we've been heavily short since the middle of April and keep publishing here our updates on a single stock that we selected as being fairly representative of the market as a whole. We also publish daily updates on our views at our website www.spiketrade.com .