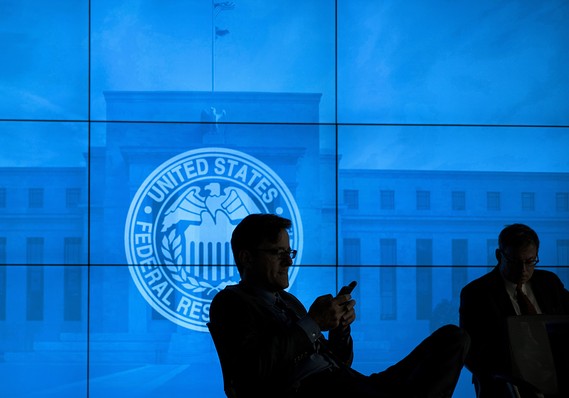 BRENDAN SMIALOWSKI/AFP/Getty Images
The Federal Reserve is taking away the punch bowl for the U.S. economy. But not right away - and only one cup at a time.

WASHINGTON (MarketWatch) — The Federal Reserve could trigger a long-awaited move to reduce its massive $4.5 trillion in debt holdings as early as September, but the central bank still appeared unsettled on the timing of its strategy to reduce the scope of its support for the U.S. economy.

The Fed said last month it would begin to whittle down its hoard of Treasury bonds and mortgage-backed securities some time this year. At a gathering of senior bank officials, “several preferred to announce the start of the process within a couple of months,” according to minutes of the June 13-14 Federal Open Market Committee meeting released Wednesday.

Yet others wanted to hold off for now, especially after a puzzling slowdown in inflation, and the Fed left open the possibility it could wait until the fall.

“The Fed is divided over the timing of the balance sheet run down and why inflation is where it is,” said Luke Bartholomew, investment strategist at Aberdeen Asset Management Investment. “These were the two big areas that investors wanted insight into and they’re going to be none the wiser.”

Wall Street could get fresh clues on Friday when the Fed releases Chairwoman Janet Yellen’s prepared testimony ahead of her regular appearance next week in Congress.

The central bank bought trillions in bond holdings in the aftermath of the Great Recession to lower interest rates and help prop up the economy, vastly expanding its balance sheet to record levels.

Now the bank wants to gradually withdraw the stimulus as the economy, entering its ninth year of expansion, returns closer to normal. In June, the Fed raised a key interest rate tied to the cost of borrowing for the second time this year.

The central bank is on track to raise its benchmark short-term rate once more in 2017 to as high as 1.5%.

Part of the Fed’s push to tighten monetary policy also reflects more anxiety over inflation. Prices rose sharply toward the end of 2016 and into early 2017 before receding in the past few months.

Most Fed officials are convinced the lull in inflation is only temporary, the result of onetime influences that will soon fade. But there did appear to be more disagreement about when and how rapidly price pressures will re-emerge.

Still, the Fed predicts annual inflation resume its upward climb and settle near the central bank’s 2% target within the next year or so. Inflation is now running at a 1.7% annual pace.

In their most recent discussion, Fed officials pointed to a rebound in economic growth since the first quarter, led by a recovery in business investment and steady consumer spending. They also saw global economic growth as on the mend and posing less of a threat to the U.S. expansion.

Some bank officials note that wages and benefits for workers are only rising moderately despite a growing scarcity of skilled workers for hire. They suggest the unemployment rate can go lower still without igniting inflation.

Others are more worried that inflation could “reemerge” if unemployment continues to decline, forcing the Fed to jack up interest rates quickly and potentially slam the breaks on the U.S. economy.

Fed officials were also puzzled about the recent runup in stock-market prices and persistently low interest rates despite tighter monetary policy. Investors might be more willing to tolerate risk, an outcome that could “lead to a buildup” toward further financial instability, some Fed officials argued.