$40 billion of new securities to be bought each month

WASHINGTON (MarketWatch) — The Federal Reserve, worried that improvement in the unemployment rate has stalled, announced a third round of bond purchases on Thursday in an effort to bring down long-term interest rates and spur economic growth.

The Fed said it would buy mortgage-backed securities at a pace of $40 billion per month.

The Federal Open Market Committee, which ended a two-day meeting on Thursday, said it was concerned that, without the action, “economic growth might not be strong enough to generate sustained improvement in labor-market conditions.” Read full text of statement.

In addition to bond purchases, the Fed said it intends to keep the benchmark short-term interest rate, known as the federal funds rate, at nearly zero until mid-2015. The prior guidance on the first rate increase had been late 2014. The guidance now extends well beyond end of Bernanke’s term in early 2014, although he could be appointed to another term by whoever is president. The central bank has kept the federal funds rate at nearly zero since December 2008.

The Fed said it would keep low rates in place for a “considerable time,” even after the economic recovery strengthens.

“Even after the economy starts to recover more quickly, even after the unemployment rate begins to move down more sizably, we are not going to rush to tighten policy. We are going to give it time to make sure the recovery is well established,” Bernanke commented.

“The Fed is being aggressive,” said Avery Shenfeld, chief economist for CIBC in Toronto. “They are taking action because every quarter that goes by, they haven’t gotten the growth that they forecast will one day come.” 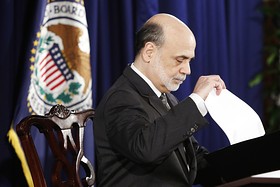 The committee’s vote was 11 to 1. Jeffrey Lacker, president of the Federal Reserve Bank of Richmond, dissented, as he has at every meeting this year. The Fed took the aggressive action out of a growing concern for the economic outlook, especially the anemic labor market.

A key element of the Fed’s statement was that the central bank will keep buying until more jobs are created, possibly at a faster rate.

“If the outlook for the labor market does not improve substantially, the committee will continue its purchases of agency mortgage-backed securities, undertake additional asset purchases and employ its other policy tools as appropriate until such improvement is achieved in a context of price stability,” the FOMC said.

Bernanke added that the Fed’s asset purchases would not last until the labor market was back to full employment: “We’re just trying to get the economy to move in the right direction, make sure that we don’t stagnate at high levels of unemployment.”

“They are saying that they will not pause until their work is done,” CIBC’s Shenfeld said.

Despite holding interest rates at zero for more than three and a half years, and the central bank buying $2.3 trillion in assets, the unemployment rate has been stuck above 8% since early 2009. There are 12.5 million unemployed workers.

Economists and even Fed officials disagree on whether further asset purchases will have any lasting effect on the economy.