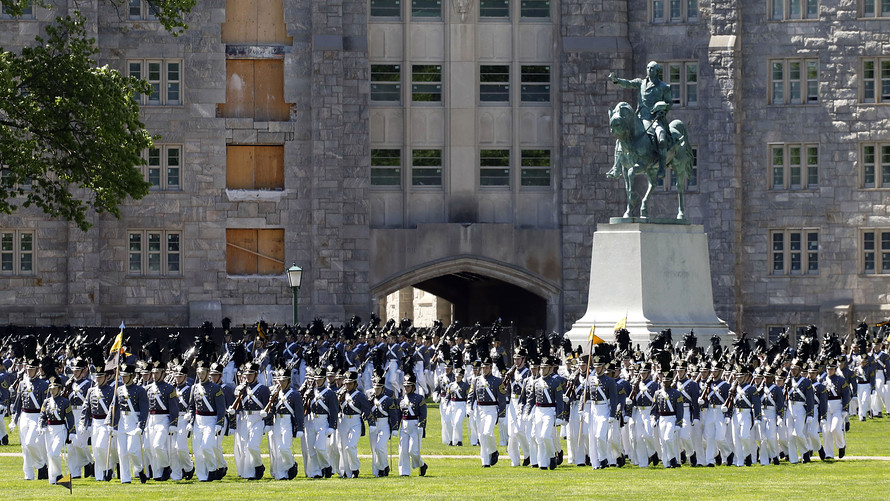 Associated Press
Members of the 2019 graduating class march last May past a statue of George Washington during Parade Day at the U.S. Military Academy in West Point, N.Y.

More than 15 members of West Point’s graduating class tested positive for the coronavirus upon their return to the the U.S. Military Academy, which is preparing to host President Donald Trump for an unusual graduation ceremony that has been criticized as too risky during a pandemic.

Trump’s announcement in April that he would give the commencement address at the historic academy was criticized as a political move. But Army officials said graduates needed to return before beginning their careers as officers anyway, so the logistically daunting task of preparing for the June 13 ceremony is underway.

“At some point, they had to come back to campus,” academy spokesman Lt. Col. Christopher Ophardt said Wednesday. “And it was like, ‘If they have to come back, how do we protect the campus and the surrounding community and protect them?’”

The roughly 1,100 class members preparing to graduate returned to campus over five days last week, with most of them driving and others flying commercially. Arrivals were immediately tested for the virus.

Ophardt said 1.5% tested positive, which works out to about 17 people, and none showed symptoms. Those who tested positive are going through 10 days of isolation in a designated barracks, before four more days of slightly less strict quarantine. They have internet access in their rooms and can go outside in set areas to read or perform physical training, Ophardt said.

The rest of the class has been divided into four groups of roughly 275, and their health is being monitored.

The groups do not intermingle with each other. For instance, the mess hall takes in two groups at a time, and they eat in different parts of the hall, Ophardt said.

“They had to turn in their military equipment, which they’re still doing now. They’ve been doing [physical training], they’ve been turning in library books, all the stuff a normal college kid would do right before they were going to leave,” he said. “And they’re getting all the medical appointments done, blood draws, all that type of stuff that needs to get done.”

The graduation ceremony this year is being moved from the on-campus football stadium to the expansive parade field known as the Plain. Cadets will march on to the Plain in socially distant formations and take seats 6 feet apart. In a dramatic departure from past years, there will be no guests. Family members can watch the ceremony via livestream.

Presidents routinely speak at West Point commencements. But Trump’s announcement during the pandemic has been dismissed as way get him on stage at the academy, which lies 40 miles up the Hudson River from New York City, the epicenter of the U.S. outbreak. U.S. Sen. Tammy Duckworth, D-Ill., a member of West Point’s Board of Visitors, said in April: “Trump’s reckless decision to gather 1,000 Cadets at West Point for a speech puts our future military leaders at increased risk — all to stroke his own ego.”

Army officials and the White House have stood by the decision. Gen. James McConville, the chief of staff of the Army, told Pentagon reporters: “We can’t telecommute to combat.”

“This upcoming graduation is about these incredible cadets and their amazing accomplishments, and as the Commander-in-Chief, President Trump wants to celebrate that and thank them for their service to our country,” White House spokesman Judd Deere wrote in an email Wednesday.

West Point’s ceremony will be similar to the U.S. Air Force Academy’s scaled-down ceremony in April. Vice President Mike Pence addressed hundreds of graduates sitting in chairs spaced out on the school’s parade field, instead of its stadium.

West Point plans to bring the other three classes back for summer training in July and to welcome members of the class of 2024 that same month.