Mary Anne & Pamela Aden are well-known analysts and editors of The Aden Forecast, a monthly investment newsletter that specializes in the U.S. and global stock markets, the precious metals and foreign exchange markets and U.S. and international interest rates and bonds. The Adens are the directors of Aden Research, based in San Jose, Costa Rica, and they are professional money managers. They have authored dozens of reports and articles and have spoken at investment seminars around the world. Their work has been featured in newspapers in several countries, in such publications as Business Week, Forbes, The Wall Street Journal, Money Magazine, Smart Money, Barron's, The London Financial Times, as well as CNBC and the international television documentary, Women of the World. For more information, go to https://www.adenforecast.com/

The bond market is super strong. It's again hitting new bull-market highs as it surges higher into the new year.

As you know, long-term U.S. government bonds were the big investment winners in 2014, gaining 46% (see Chart 1 ). It looks like that's going to continue as 2015 evolves, very possibly throughout the year. 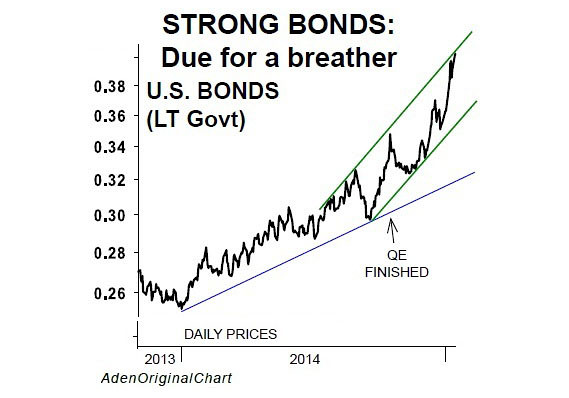 Why bonds are set to rise further

We know that may seem strange, especially considering the big rise bonds have already had, but it's really not. Here's why:

With the rest of the world on thin ice, it would be too risky for the Fed to raise rates prematurely. This means bonds will probably keep rising for most of this year.

The bottom line? Keep your bonds.

Until we see otherwise, long-term U.S. government bonds are a good buy and hold. The major trend is solid, and it remains up. This market is strong and bullish, and government bonds continue to be the best overall investment in today's environment.

We also like the bond ETFs. The Ultra 20+ year Treasury /zigman2/quotes/207070561/composite UBT -2.91%  has consistently been the strongest, and it's our favorite. For now, these markets could decline some in the weeks ahead, which would be normal, because they've risen far and fast.If so, that'll provide an even better buying opportunity. Either way though, buy some bonds if you haven't bought yet.

Get news alerts on ProShares Ultra 20 Year Treasury — or create your own.
Page 1