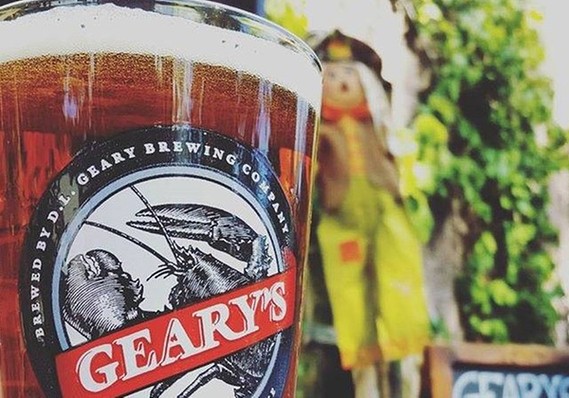 David Geary, now 72, founded the first craft brewery in Portland, Maine, D.L. Geary Brewing, in 1983. Speakeasy Ales & Lagers was the first brewery in San Francisco’s Bayview neighborhood when it opened in 1997. Both have iconic beers (London Porter and Prohibition Ale among them), standout labels (Geary’s lobster and Speakeasy’s shifty eyes) and deep roots in their communities. Both now face uncertain futures.

Last year, the Portland Press Herald revealed that Geary’s produced 34.5% less beer in 2015 than it did in 2011, just as craft brewery production nationwide was increasing by 113.8% during that time. Meanwhile, also in 2015, Speakeasy spent $7.5 million to increase its capacity from 15,000 barrels to 90,000 barrels. Earlier this month, within a day of each other, Geary’s was sold to Maine businessman Alan Lapoint for an undisclosed sum. Presently, Speakeasy is in receivership and still brewing with a skeleton crew of eight workers. According to beer industry publication Brewbound, turnaround-management firms are attempting to sell Speakeasy and recoup the debt owed to the main creditor.

At Geary’s, meanwhile, one of Lapoint’s first acts was to lay off long-tenured employees without severance, which prompted backlash from several local outlets selling Geary’s products. Though the folks at Geary’s admit the brewery would’ve gone bankrupt without Lapoint, who inherited The Strainrite Cos. filtration-products company from his father, the new owner faces a rebuilding effort that may not turn a profit until 2018 and may have tarnished the brand’s local legacy.

We’ve mentioned the struggles of older craft breweries before and the challenges that some face when their founders reach retirement age, but there’s an added urgency to keeping brands fresh and growing wisely instead of quickly. It’s becoming a regular refrain, but there are now more than 5,000 breweries in the U.S., according to the Brewers Association craft beer industry group. There are hundreds more in the planning stages. That’s putting pressure on all breweries, but it’s being felt acutely by brewers not used to dealing with that reality.

While brewery numbers are growing, craft beer sales aren’t matching their pace. Last year, the Brewers Association said craft beer sales by volume had grown 8% by June. That’s the first time it hadn’t grown by double-digit percentage points in more than a decade. A growth line that was at a 45-degree angle just a few years ago — one that encouraged banks to lend and brewers to increase capacity and open breweries on the East Coast or in other countries — is leveling out. If you don’t have backing from private-equity firms or larger brewers, it’s a whole lot more difficult to fund your ambitions (and the debt that comes with them) than it was even half a decade ago.

As Brewbound and market-research firm IRI point out , some of the old methods just aren’t working for craft brewers anymore. Supermarket sales of craft beer increased 6.9% in 2016, but it was the first time they didn’t increase by double-digit percentage points since 2005. Sales of core brands from Sierra Nevada, Widmer Brothers, New Belgium and Boston Beer Co.’s /zigman2/quotes/205338227/composite SAM +1.84%  Samuel Adams brands all declined. Meanwhile, brands from Founders and Firestone Walker showed more than 60% growth, but required help from new investors including Spanish brewer Mahou San Miguel and Belgian brewer Duvel Moortgat’s U.S. branch. With tastes changing, tap handles and store shelves crowding, and new brewers relying more heavily on local, “own-premise” sales at taprooms and brewpubs, a brewer can no longer just assume consumers will buy their beer (or more of it) simply because it exists.

Since 2013, between 60 and 70 breweries have closed each year. If a long-tenured brewer isn’t guarding its turf, updating its products and marketing, maintaining its beer’s freshness, second-guessing its spending and doing its best to stay relevant enough to pay the bills, no amount of history, equity or snazzy labels will keep its doors open and beer flowing.