But, Duckworth writes in New York Times op-ed, she ‘would put on my old uniform and go to war all over again to protect the right of Tucker Carlson and Donald Trump to say offensive things on TV and Twitter’ 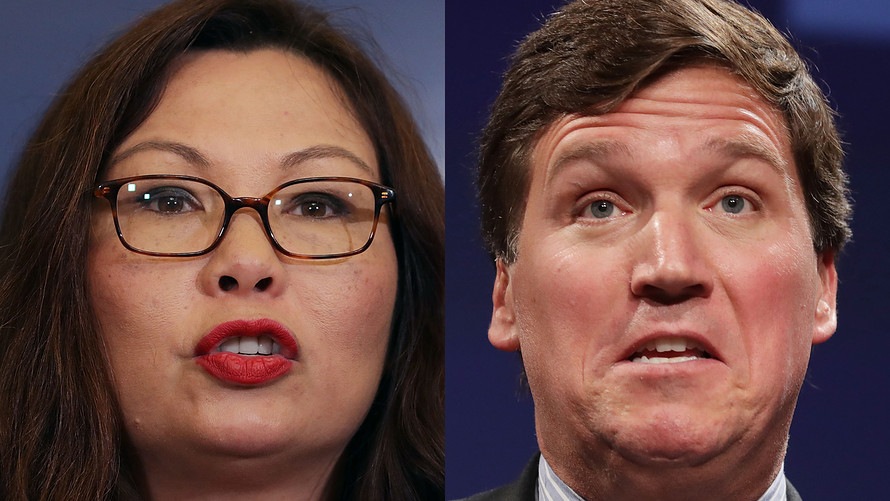 ‘Does @TuckerCarlson want to walk a mile in my legs and then tell me whether or not I love America.’

That’s Sen. Tammy Duckworth, Democrat of Illinois, firing back in a tweet at Fox News host Tucker Carlson, after he slammed her as a “deeply silly and unimpressive person” on his show Monday.

Carlson also counted Duckworth, who lost her legs while flying a U.S. Army helicopter in Iraq in 2004, among those who “actually hate America” because she supports a “national dialogue” about whether monuments should be removed and military bases renamed as the country re-examines its history.

“You’re not supposed to criticize Tammy Duckworth in any way because she once served in the military. Most people just ignore her,” he said. “It’s long been considered out of bounds to question a person’s patriotism. It’s a very strong charge, and we try not ever to make it.”

In a New York Times op-ed published Thursday, Duckworth said it was disingenuous of Carlson to distill her call for a dialogue on the complex legacies of the Founding Fathers to the conclusion that she hates America . She took particular issue with his claim that she’d called George Washington a traitor. On the contrary, she wrote, she had been unambiguous in saying “no” when asked whether any such claim could be justified.

“[L]et me be clear: I don’t want George Washington’s statue to be pulled down any more than I want the Purple Heart that he established to be ripped off my chest,” wrote the Illinoisan, elected in 2016 to President Barack Obama’s former Senate seat, defeating Republican incumbent Mark Kirk, who rescinded his endorsement of Donald Trump for the presidency during the race. “I never said that I did.”

Duckworth last weekend had described President Trump as having demonstrated that his “priorities are all wrong,” criticizing him for spending more time “honoring dead Confederates” than talking about the growing number of Americans who have died during the coronavirus pandemic.

The senator has been shortlisted as a potential vice-presidential selection for the presumptive Democratic presidential nominee Joe Biden.

Read: As Klobuchar urges Biden to choose woman of color, here’s who could be his vice-presidential pick

Watch Carlson’s opening monologue (the comments on Duckworth begin at the 11:40 mark):

Carlson, amid some voices of support, caught plenty of flak for his comments as he climbed Twitter’s /zigman2/quotes/203180645/composite TWTR +0.43% list of trending topics. Here are a few of the highlights, including one from Joe Walsh, a Republican incumbent whom Duckworth unseated in a House election in 2012 (a race during which Walsh questioned the Purple Heart recipient’s heroism ):

In the closing paragraph of the Times op-ed, after calling Carlson and Trump insecure men who can’t differentiate patriotism and nationalism , Duckworth wrote: “So while I would put on my old uniform and go to war all over again to protect the right of Tucker Carlson and Donald Trump to say offensive things on TV and Twitter, I will also spend every moment I can from now until November fighting to elect leaders who would rather do good for their country than do well for themselves.”