Friends of the Misunderstood and Unloved

VINCENT SELLECCHIA AND J. DENNIS DELAFIELD ARE old-fashioned value investors, focusing on smaller companies where they think they can get a better edge compared with, say, IBM or Procter & Gamble. Poring over spreadsheets and company filings, they look for clues that a "change for the better is taking place that isn't recognized in the market," says Sellecchia, and they also spend considerable time talking to management teams. Delafield Asset Management, whose assets total about $800 million, includes the $480 million Delafield Fund [ticker: DEFIX], which Sellecchia, 57 years old, and Delafield, 73, have run since 1993. Although the fund was down 37.6% last year, narrowly trailing the broad market, its long-term record is solid. The fund's 10-year annual return of 8.43% bests 90% of its peers in Morningstar's mid-cap value category. Barron's sat down for a chat with Sellecchia and Delafield last week. 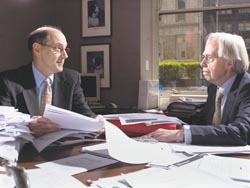 Barron's : What is your latest read on the stock market?

Sellecchia : The ability for companies to tap the credit markets is clearly helping equities. The equity markets have been remarkably resilient over the last month or so, but they were horrific in the fourth quarter. So in some respects the recent rebound has more to do with how miserable the markets were, along with the fact that the bond market has begun to improve.

Delafield : In retrospect, it has been clear that there was a massive inventory liquidation going on. So companies had to work through that. In some industries that will continue well into this quarter, but it is tapering off.

Has it been any easier to find attractive investments in this type of a market?

Sellecchia : Especially if you go back to the latter part of '08, valuations simply fell off the cliff. Clearly, it was a period in which we didn't know what was going on around us in the world and whether the credit markets were going to be there. In terms of their orders, companies are starting to stabilize on a sequential basis, though they are still down sharply year over year. But now you can begin to put some type of forecast together, coupled with cash flows, and take a look at what these companies will do over the next year or two.

Delafield : For the first time in probably a couple of generations, it has been more important to focus on covenants, bank lines and all of the credit sides of an industrial company, to say nothing of a financial company

Even if you are just looking at equities?

Delafield : That is right.

Sellecchia : Here is the debt-maturity schedule for one of the companies we are beginning to look at. Companies that 18 months ago would have been considered under-levered with a debt-to-capital ratio of, say, 30% to 40% last year became way over-levered and everybody began to question how they could access the credit markets. It was difficult just simply to roll over bank debt.

What did you learn from the recent market meltdown?

Delafield : That is an easy one. If we had realized the severity of the banks' constriction of credit to companies in general, we could have saved ourselves enormous anguish.

Sellecchia : We had been worried for quite a while, we just weren't worried enough.

The fund's cash position was about 13.5% at the end of March, and it is up a little since then. What is behind that?

Delafield : Our cash position reflects the investment ideas that we can find as well as our feel for how the economy is doing and for the valuations in the stock market. At the moment it remains relatively high, though it has been higher. But once the inventory liquidation is over and things have come back more to normal, then we will have to see if we get growth or whether we get stagnation for a while.

We will put people back to work in this country, and we will liquefy the banking system. But it won't happen over night.

Sellecchia : We have raised our cash position somewhat, given the sharp moves in quite a few of our holdings.

Are you concerned that this huge rally since early March might be a head fake?

Sellecchia : For sure. As Dennis pointed out, the question is, what does the economy look like once the inventory liquidation ends? It should naturally lift a bit. But what happens if the economy just plateaus?

How have you changed the portfolio?

Sellecchia : We haven't changed our investing philosophy. We have always been very much focused on cash flow, and we are increasingly focused on free cash flow given this environment. We have sold down some holdings that have performed well for us because, as we discussed, it isn't that we are worried or that we know that this rally is going to be a head fake -- but it could be.