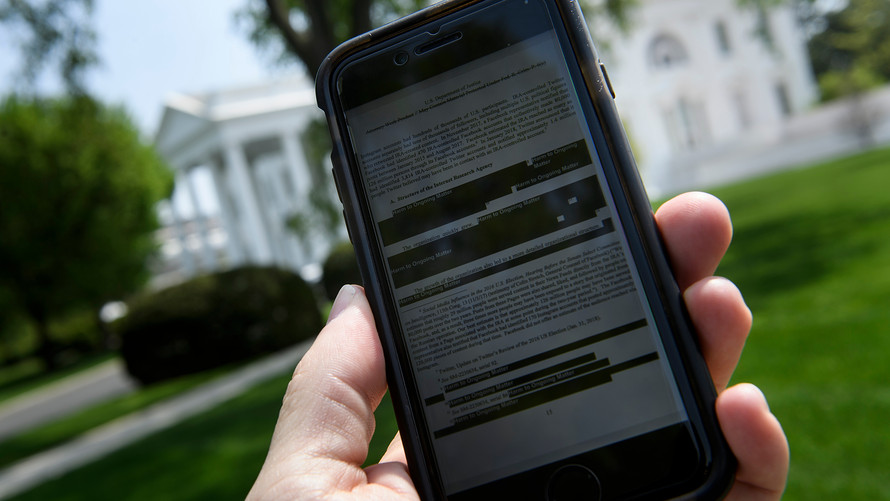 BRENDAN SMIALOWSKI/AFP/Getty Images
The Mueller report is peppered with details on high-tech hobnobbing.

When George Papadopoulos wanted in on Donald Trump’s presidential campaign, he hit up the campaign manager on LinkedIn. So began his short-lived, if infamous, stint as a foreign-policy adviser to the Trump campaign.

The report determined no one on the Trump campaign “conspired or coordinated with the Russian government in its election interference activities.”

But it wasn’t for lack of trying on the Russian end, starting with the work of “Internet Research Agency,” an operation receiving money from an oligarch closely linked to Russian president Vladimir Putin.

Don’t miss: Amazon’s audiobook of the Mueller report has an Orwellian price tag of $19.84

The report even defines the term “troll,” describing it in a footnote as “internet users — in this context, paid operatives — who post inflammatory or otherwise disruptive content on social media or other websites.”

The agency “carried out the earliest Russian interference operations identified by the investigation — a social media campaign designed to provoke and amplify political and social discord in the United States,” according to the report.

Separate from the bogus social-media blitz was Russian contact with the campaign, enabled in part by the multitude of ways to communicate, including texts, emails and Skype talk.

Separate from the bogus social-media blitz was Russian contact with the campaign, also enabled in part by the multitude of ways to communicate, including text messages, emails and Skype talk /zigman2/quotes/207732364/composite MSFT -1.06% .

In 2017, Colin Stretch, Facebook’s general counsel, told a Senate subcommittee the site was determined to never have a repeat of what happened during the 2016 election.

“That foreign actors, hiding behind fake accounts, abused our platform and other internet services to try to sow division and discord — and to try to undermine our election process — is an assault on democracy, and it violates all of our values,” he said.

In November, one purported Russian news agency sued Facebook for getting tossed from the platform. Federal Agency of News said its First Amendment rights were stymied when Facebook administrators blocked its page and deleted its account in April 2017, along with approximately 270 other sites. Earlier this week, Facebook argued the case was baseless.

Various federal law enforcement agencies, from the FBI to the CIA to Mueller’s team, said the Federal Agency of News “used its Facebook account to interfere unlawfully with the United States’ 2016 presidential election,” according to the dismissal motion filed in the Northern District of California.

“Plaintiffs have no right, much less a constitutional one, to use Facebook in this way, and Facebook’s decision to remove the FAN account and profile page was entirely lawful,” said attorneys for the site.