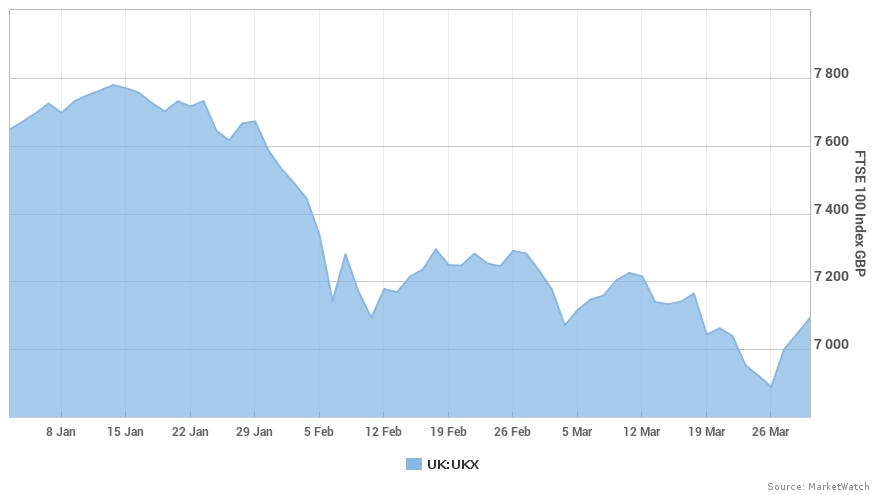 U.K. stocks edged higher Thursday, with a late-afternoon push coming from GKN PLC after the engineering group sealed a merger, but London blue-chip equities declined for the month and quarter

The pound, meanwhile, was cementing its strongest quarter in nearly three years as investors headed out for the Easter and Passover weekends.

The FTSE 100 index (FTSE:UK:UKX) ended up 0.2% at 7,056.61, led by the basic materials and consumer-goods sectors. But the utility and financial groups lost ground. On Wednesday, the index finished up by 0.6%.

The blue-chip benchmark fell 2.3% in March, the third straight monthly decline. Also, it sank 8.2% for the first quarter of 2018, the worst performance since the third quarter of 2011, according to FactSet data.

The pound (XTUP:GBPUSD) on Thursday changed hands at $1.4021, down from $1.4076 late Wednesday in New York. But sterling has risen about 3.8% against the buck during the first quarter, the biggest rise since the second quarter of 2017.

U.K. financial markets will be closed Friday and on Monday in observance of the holidays.

Read: Which markets are closed on Good Friday? 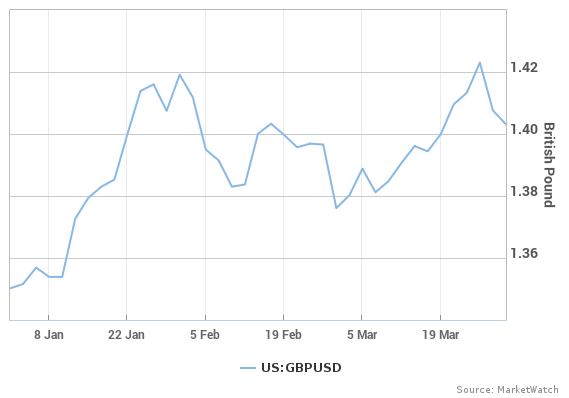 Sterling had a strong first-quarter run

But mining stocks this month have taken a hit alongside broader equity markets, buffeted by fears of global trade war and a possibly stepped-up pace of interest rate rises by the U.S. Federal Reserve. U.S. President Donald Trump’s tone on trade has helped drive some investor concerns, after his administration slapped tariffs on steel and aluminum imports, and considered taking aim at Chinese imports via similar duties.

The FTSE 100 was also hurt this quarter by a climb in the pound against the dollar, and by a roughly 1.5% advance against the euro (XTUP:GBPEUR) . A stronger value of sterling can hurt shares of multinational companies that are heavily weighted on the FTSE 100, as revenue and earnings for those companies can be reduced by pound strength.

The pound has stepped higher on expectations the Bank of England will raise interest rates again this year, possibly in May. It’s also benefited from quarterly losses for the dollar (IFUS:DXY) .

Sterling is still below the $1.50-area it traded at just before Britain voted to leave the European Union in a June 2016 referendum. Thursday marked one year to go before Brexit, although Britain and the EU last week agreed to a two-year transition deal.

The U.K.’s gross domestic product in the fourth quarter of 2017 was unchanged by the Office for National Statistics. Quarter-over-quarter GDP growth was confirmed at 0.4%, meeting expectations, and year-over-year growth remained at 1.4%.

Read: U.K. economy lags with a year to go to Brexit

New borrowing by U.K. households rose in February to its highest level since September as Britons borrowed an additional £5.4 billion ($7.6 billion) during the month, driven by new mortgage borrowing, according to Bank of England data.

GKN PLC shares  rallied 9.5% to £4.63 each after more than 50% of the engineering group’s shareholders accepted an £8.1 billion buyout offer from turnaround specialist Melrose Industries PLC (LON:UK:MRO)  . The deal comes after three months of arguing between the companies and intervention by the British Government.

Barclays PLC (LON:UK:BARC)  closed up 0.2% after the U.S. Justice Department said the London-based lender agreed to pay $2 billion in civil penalties to resolve fraud claims stemming from the sale of residential mortgage-backed securities, or RMBS, between 2005 and 2007.

Off the main benchmark, NEX Group PLC shares added 0.9% after the London-based financial-technology company agreed to a takeover by CME Group Inc. (NAS:CME)  in a deal worth $5.4 billion. NEX shares jumped 9.8% on Wednesday on news of a pending deal.

Apparel and accessories retailer Ted Baker PLC  fell 4.4% on the FTSE 250 after a ratings downgrade to hold from buy at Jefferies.

“[G]iven the near-term unseasonal weather in the U.S. [and] Europe and management’s cautious guidance, we believe the historical sales momentum underpinning the equity story will prove more elusive in the near term,” said analyst Niraj Amin in a note.