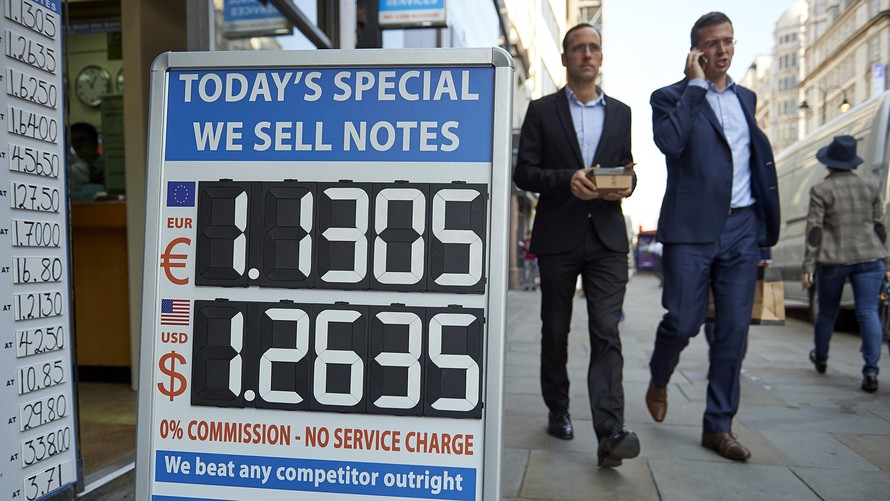 AFP/Getty Images
The pound has tumbled to 31-year lows in the wake of the Brexit vote in June.

A plunge in the pound has ushered British blue-chip stocks to an intraday record high, but stocks still face hurdles in the form of earnings reports and market expectations over the U.K.’s government’s spending plans.

The FTSE 100 has been climbing as the pound /zigman2/quotes/210561263/realtime/sampled GBPUSD -0.0312%  has been battered to fresh three-decade lows. About 75% of revenue for the FTSE 100 is generated outside the U.K. from large international companies such as British American Tobacco /zigman2/quotes/209116881/delayed UK:BATS -2.35%   and Dove soap maker Unilever /zigman2/quotes/205449809/delayed UK:ULVR -0.12%  and their products become cheaper, and in greater demand, for holders of other currencies when sterling weakens.

“Even with improvement in the pound and how that boosts earnings, it can’t surely go on forever. [Sterling] would reassert itself at some point,” said Chris Beauchamp, chief market analyst at IG.

“But I suppose if you continue to have this flattering of earnings for the time being, people are happy with it. The reflection is that the global economy is looking better, risk appetite seems to be improving and people seem happy to let the index do it’s own job,” he said.

It was in April 2015 when the FTSE 100 was hitting all-time highs alongside continental European equities. That’s when the European Central Bank was early into its then €1.1 trillion bond-buying program, and investors were using proceeds from debt sold to the bank to buy assets including London-listed shares.

This time around, the pound is the big factor driving up the value of U.K. blue chips. The currency has been selling off in recent sessions after U.K. Prime Minister Theresa May signaled the U.K. government will prioritize immigration issues over access to the European Union’s single market in its Brexit discussions with EU negotiators.

Sterling continued to fall Tuesday, dropping to $1.2200, after a report that U.K. tax revenue could tumble by £66 billion ($81 million) a year if a so-called “hard” Brexit scenario becomes a reality.

“Unless there’s some market shock that triggers a risk-off response across the board, I think [the FTSE’s rise] could go on for a while yet,” said Fawad Razaqzada, technical analyst at Forex.com.

Poorly received earnings reports could clip equities, he said, although he doesn’t foresee that coming at a particularly hefty costs for stocks. 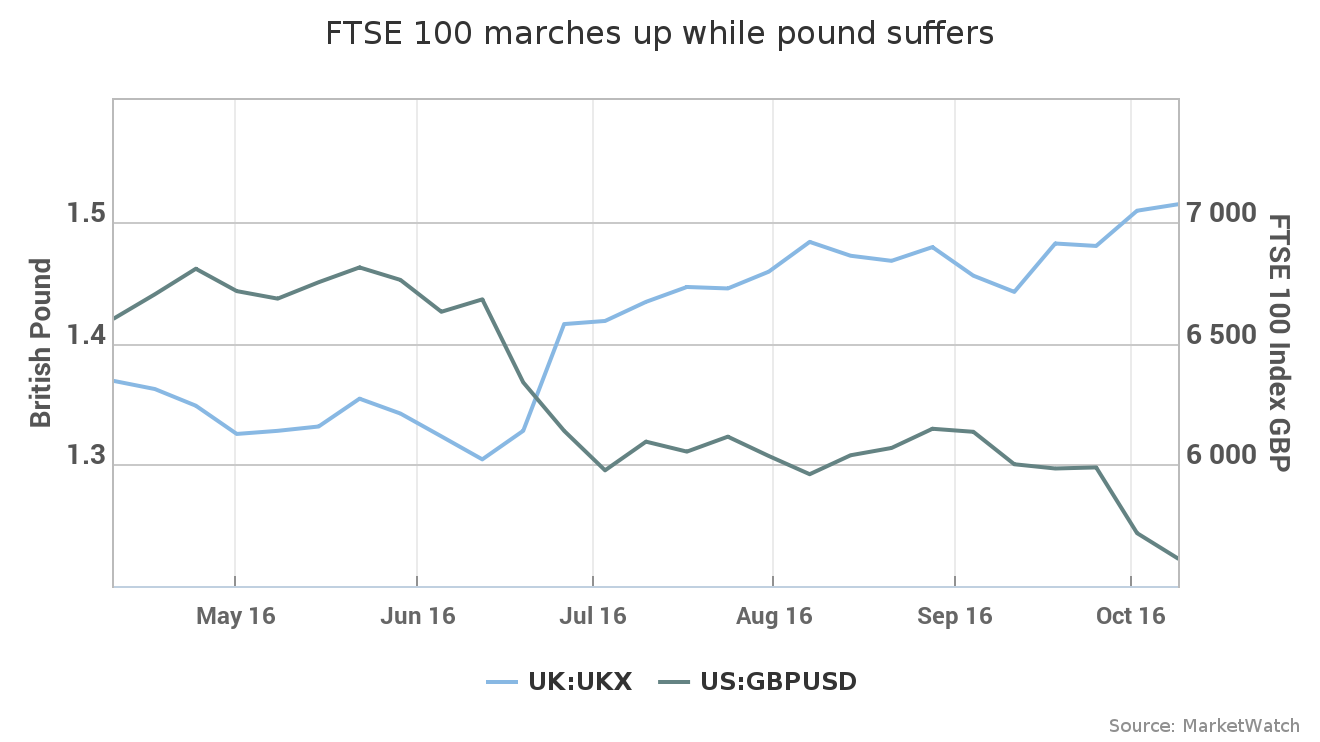 While the Federal Reserve’s rate-setting decision on Nov. 2 could emerge as a risk, it’s unlikely the bank will hike rates before the U.S. presidential election on Nov. 8, Razaqzada said. Overall, “the market has come to the realization that they are going to raise rates this year.”

Considering that “we’ve come so far so quickly, I think potentially the [FTSE 100] is at risk of a temporary blip,” said IG’s Beauchamp. “And then that would be taken as another buying opportunity by the market if you get a period of pound strength heading into the Autumn Statement.”

The U.K. Treasury’s Autumn Statement is due on Nov. 23 and will outline the government’s budget plans.

The pound could find some upside relief if “people are assuming that the government will start to take over from the Bank of England in terms of fiscal policy,” Beauchamp added.

Prime Minister May is aiming for Brexit talks to begin by the end of March.