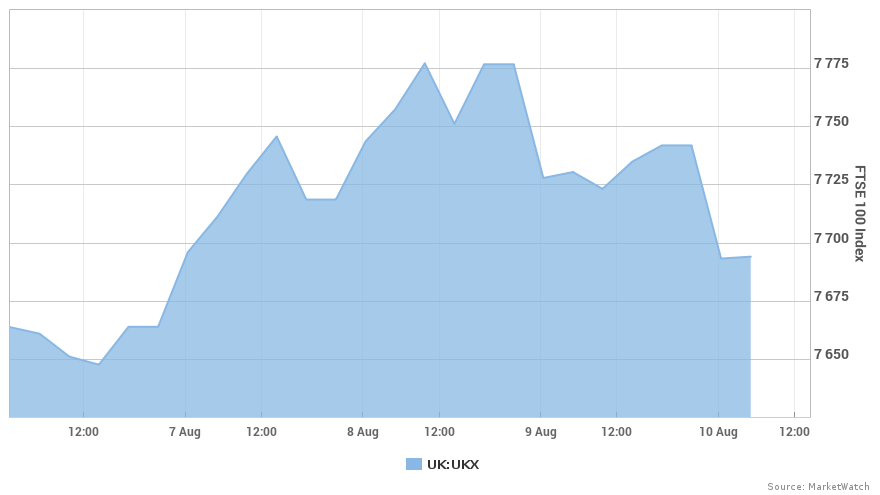 FTSE 100 is moving toward a weekly win

U.K. stocks finished in negative territory Friday, dragged down alongside the broader European equity market, on mounting concerns that Turkey’s currency crisis will metastasize to eurozone lenders. However, London’s blue-chips index retained a slight weekly gain on the back of persistent sterling weakness.

U.K. stocks were little changed after a reading of British economic growth came in line with expectations.

Equities across the region (STOXX:XX:SXXP) stumbled following a Financial Times report that the European Central Bank is growing more concerned about exposure of European banks to Turkey’s woes. The Turkish lira (XTUP:USDTRY)  was sent plunging to its lowest in a year against the U.S. dollar on Friday.

Check out: 3 reasons the selloff in Turkey’s lira matters for markets all over the world

The euro (XTUP:EURUSD)  also dropped against the dollar “as investors feared European banks exposure to the lira. The common currency broke below the key $1.1500 support mark for the first time in more than a year. The fears also rippled to [the pound-dollar pair] which took out the $1.2750 barrier in early London dealing,” said Boris Schlossberg, managing director of FX strategy at BK Asset Management.

Read: Dollar index jumps to around one-year high as Turkey’s lira gets rocked

Spain’s BBVA SA (MCE:ES:BBVA)   (NYS:BBVA) , Italy’s UniCredit SpA (MIL:IT:UCG)  and France’s BNP Paribas SA (PAR:FR:BNP)  are among the biggest lenders to Turkey and have come under closer scrutiny by the Single Supervisory Mechanism, the ECB’s arm charged with monitoring the region’s banks, according to the FT report.

Meanwhile, retail stocks ended lower as upscale apparel and accessories retailer House of Fraser went into administration after a collapse in talks between the company and its creditors. But Sports Direct International PLC  has purchased the struggling chain for £90 billion, expanding a stake already held in House of Fraser by Sports Direct’s owner, Mike Ashley.

Ryanair Holdings PLC shares (LON:UK:RYA)  fell 4.2% as the airline said it plans to operate 85% of its schedule Friday as pilots in five European countries take strike action. That is the fifth strike action since July 12.

Diageo PLC (LON:UK:DGE)  was off by less than 0.1%, even after the maker of Gordon’s Gin and Smirnoff vodka said it would start buying back up to 1.4 billion pounds ($1.79 billion) of its shares until Jan. 31.