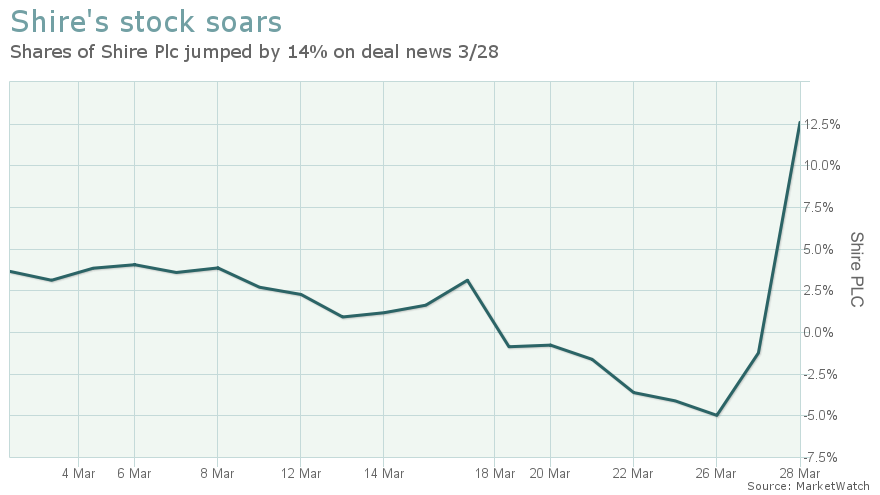 But with one full trading session left in March, the blue-chip benchmark was still poised to fall 2.6% for the month, and has lost more than 8% this year.

The FTSE 100 staged a turnaround after falling as much as 1.1% during the session. That improvement came largely on the back of Shire shares  , which rallied as much as 26% after Japanese biopharma Takeda Pharmaceutical Corp. /zigman2/quotes/201302442/delayed JP:4502 -0.96%  said it’s considering making an offer for its rival. Shire shares closed up 15.6%, the strongest percentage gain since June 2014.

Ratings upgrades for Burberry Group PLC and a couple of other companies by large investment banks also helped move the benchmark into positive territory.

Investors dumped tech sector shares, which have been at the forefront of Wall Street’s run higher for more than a year, on various regulatory concerns including for electric car maker Tesla Inc. /zigman2/quotes/203558040/lastsale TSLA +4.73%  , and news that the U.S. is considering a ban on Chinese investment in certain sensitive technologies.

By contrast, reports that the U.S. and China are conducting behind-the-scenes trade talks helped drive a surge in London-listed blue chips on Tuesday, as concerns about a global trade war abated.

But the FTSE 100 appeared able to shake off tech worries faster than other markets as the tech sector has a weighting of just 0.62% on index, with only two components in the group, according to FactSet data.