FTSE 100 finishes down from record with Carillion collapse in focus 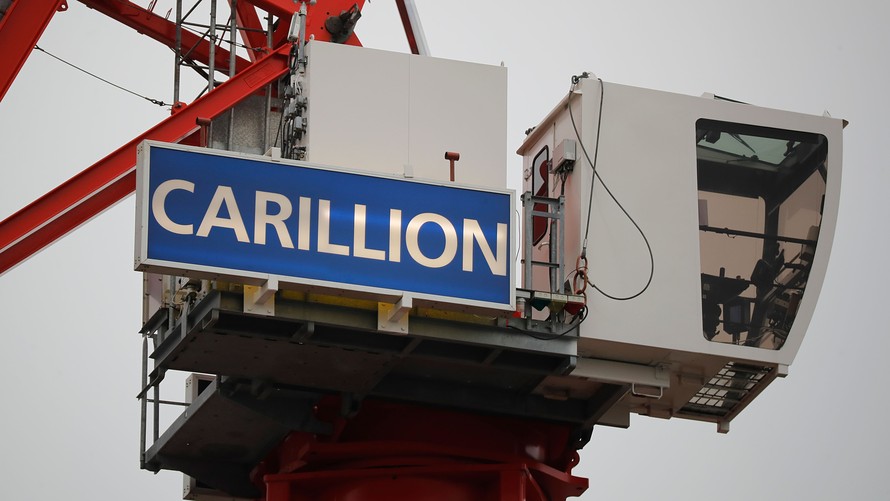 U.K. stocks closed lower Monday, as investors started the week with news of the collapse of construction and outsourcing heavyweight Carillion PLC, but the blue-chip benchmark kept near a record-high level.

How are markets moving?

The subdued Monday mood was ushered in with news that Carillion /zigman2/quotes/208402800/delayed UK:CLLN -28.95%  will enter liquidation after crisis talks failed over the weekend. The construction company that also runs public services at prisons, hospitals and schools, but the government and Carillion’s creditors couldn’t work out a way to save the firm. Carillion shares, which trade off the FTSE 100, have been halted.

“The knock in confidence to the U.K. economy – Carillion employs around 20,000 people, and utilizes a huge network of smaller subcontractors — likely contributed to the FTSE’s ... dip,” on Monday, said Spreadex financial analyst Connor Campbell in a note.

Meanwhile, shares of Asia-focused banks HSBC PLC and Standard Chartered PLC were lower after China’s banking regulator this weekend said it will step up efforts to root out financial risks in the banking industry.

Investors were also keeping watch on the pound, which on Friday jumped to its highest against the U.S. dollar since the June 2016 Brexit referendum.

“It is far from clear at this stage what the wider implications will be from the liquidation of Carillion, both in terms of its impact on the construction industry and on the wider economy as a whole, not least from the enormous uncertainty that now afflicts the tens of thousands of Carillion staff and those other companies directly dependent upon it,” wrote Rebecca O’Keeffe, head of investment at Interactive Investor.

GKN  rose 4.1%, after reports that U.S.-based private equity firm Carlyle is considering a bid for the U.K. engineering company. Meanwhile, Melrose Industries PLC /zigman2/quotes/210306391/delayed UK:MRO +4.05%  , whose takeover bid was recently rejected by GKN, said Monday it will start holding a series of meetings with shareholders to discuss the proposal. Melrose shares closed 1.4% higher.