After the finale, ‘Game of Thrones’ fans could give HBO a rude awakening

The battle for streaming subscriptions is fierce, just like the power plays on ‘Game of Thrones’ 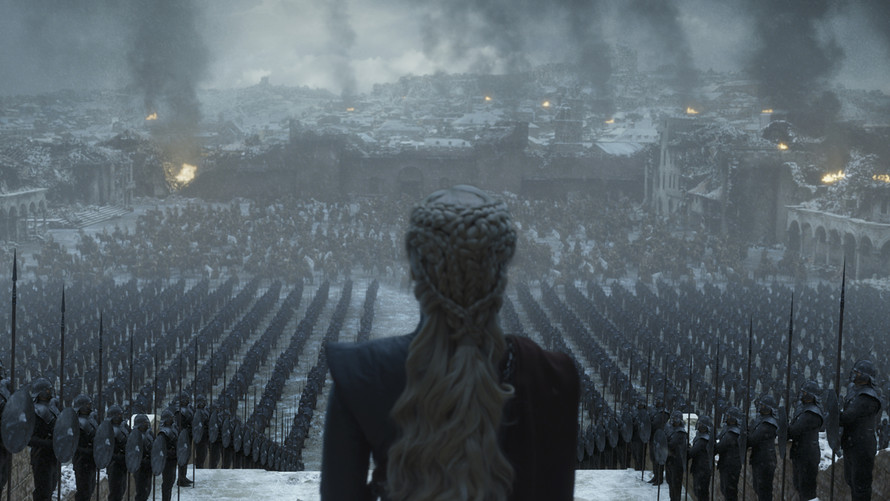 Courtesy of HBO
The ratings for ‘Game of Thrones’ are reminiscent of the halcyon days of network television in a time before cable.

The final episode of “Game of Thrones” on Sunday could have one final twist.

The eight-season series is a drama fantasy of epic proportions. So are its ratings. April’s “Game of Thrones” season premiere broke a series record with 17.4 million viewers, counting people who watched it on television and those who streamed it on HBO Go, the complimentary service for television subscribers, and HBO Now, the app that costs $14.99 a month.

20% of HBO Now subscribers told Mintel last month they would cancel their subscription if their favorite show ended.

The ratings for “Game of Thrones” are reminiscent of the halcyon days of network television in a time before cable. Last week’s “Game of Thrones” episode garnered 18.4 million viewers across television and streaming apps. By comparison, 11.9 million people watched the final 2007 episode of HBO’s mafia drama “The Sopranos.” To put that in context, “Veep,” the critically-acclaimed dark political comedy starring Julia Louis-Dreyfus, drew 1.6 million viewers to its series finale on May 12 — and that was a season high.

How upset will subscribers be after Sunday’s finale? Buddy Lo, senior technology and consumer electronics analyst at market research company Mintel Comperemedia, predicts there will be a jump in HBO Now cancellations after the show’s conclusion. “Game of Thrones” was a “huge cultural phenomenon,” said Lo.

Mintel estimated the average viewer pays for two to three services, but they were most likely to have HBO Now when they had four services.

Another bad sign for HBO: Mintel estimated the average viewer pays for two to three services, but they were most likely to have HBO Now when they had four services. The other accounts included Netflix, Amazon Prime and Hulu. Some caveats to those findings: An estimated 8 million subscribers paid for HBO Now by the end of 2018, according to TDG Research, a market research firm. Netflix had 139 million paying subscribers at the end of last year while Amazon Prime, at least in early 2017, had about 26 million customers according to a report on internal documents.

Timing is everything, of course, and Mintel polled HBO Now subscribers in the weeks before the finale of one of the biggest shows on television. HBO subscribers may be less upset that they’re favorite show is ending a month from now. What’s more, it’s obviously easier to binge-watch shows like “The Crown” on Netflix and then drop the service, given that all the episodes drop at once.

On Twitter /zigman2/quotes/203180645/composite TWTR -0.43% , some fans claimed they would cancel their HBO Now subscription right after the show’s finale on Sunday. One woman, Rachael Sunday, said after Game of Thrones is over “I’m going to cancel HBO.” She plans to move over to CBS All Access   she can “ binge the hell out ” of the science-fiction show “Star Trek Discovery.” (She is a sci-fi fan, so she’s more likely to want to jump from streaming service to streaming service seeking other sci-fi hits.)

A graphic making its way around Reddit on Monday showed Google searches for the phrase “cancel HBO subscription” spiked in recent days.

Even presenters on HBO are wondering how many people will channel their inner dragon and fly away after Sunday’s finale. John Oliver, the host of HBO’s “Last Week Tonight” also joked about how a chunk of “Game of Thrones” fans could evaporate from HBO’s streaming service. (An HBO spokesman did not respond to a request for comment.)

HBO will also do what it can to hold on to viewers with ’Game of Thrones’ spinoffs and other fantasy content, like the upcoming ‘The Watchmen.’

HBO is hardly a pushover in the fight between streaming providers. It’s the maker of quality content, like the well-reviewed sci-fi series “Westworld” and “Big Little Lies,” starring Reese Witherspoon and Nicole Kidman. What’s more, diehard fans can keep their subscriptions and watch “Game of Thrones” reruns again and again.

Lo said the network will also do what it can to hold on to viewers with “Game of Thrones” spinoffs and other fantasy content, like the upcoming “The Watchmen,” inspired by the 1986 dark graphic novel. Consumers are “very judicious about how they are spending their money,” he added.