A pair of monumentally significant third-round results hours apart in the same stadium: A surprising first-week loss by Williams, then a historic victory by Gauff 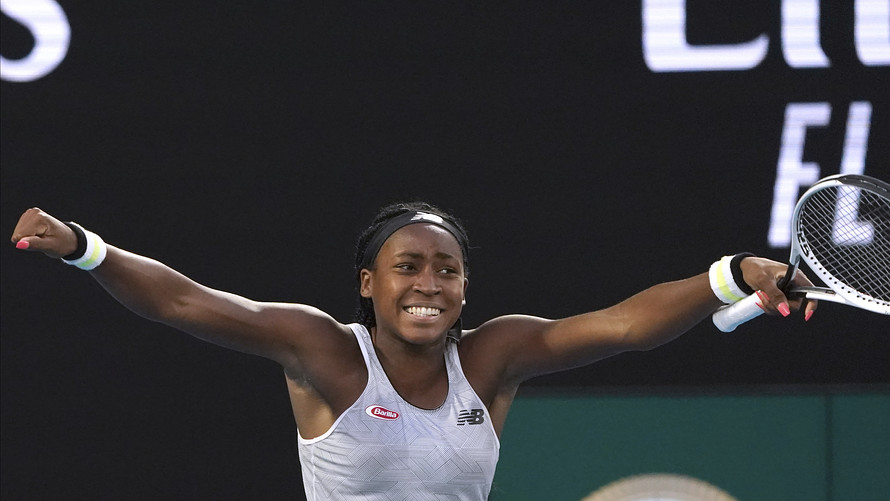 AP Photo/Lee Jin-man
Coco Gauff of the U.S. celebrates after defeating Japan's Naomi Osaka in their third round singles match at the Australian Open tennis championship on Jan. 24, 2020.

Sure felt, though, as if a generational shift was being signaled Friday at the Australian Open, with a pair of monumentally significant third-round results hours apart in the same stadium: a surprising first-week loss by Williams, then a historic victory by Gauff.

First, Williams faltered down the stretch for her earliest exit at Melbourne Park in 14 years, a 6-4, 6-7 (2), 7-5 loss to 27th-seeded Wang Qiang of China. It pushed Williams’ gap between Slam trophies to three years.

“I’m way too old to play like this at this stage of my career,” Williams said. “Definitely going to be training tomorrow, that’s first and foremost — to make sure I don’t do this again.”

Gauff also was planning a practice session for Saturday, but hers was to prepare for a fourth-round match.

Also see: Far from the Australian Open, here’s what it’s like to play in pro tennis tournaments where even the champions don’t break even

That’s because the 67th-ranked Gauff took the latest step in her quick progression, becoming the youngest player in the professional era to eliminate the defending women’s champion at the Australian Open, beating former No. 1 Naomi Osaka 6-3, 6-4.

Only once the last point had been played did the preternaturally poised Gauff turn into a rather typical teen, joking about wanting to take “a selfie for Instagram” with Rod Laver, the 11-time major champion after whom the tournament’s main stadium is named.

“Honestly, like, what is my life? Like, oh, my gosh!” Gauff told the crowd. “Two years ago, I lost first round in juniors and now I’m here. This is crazy.”

It certainly is remarkable.

With a booming serve, a top-flight backhand and a winner’s mentality, Gauff reversed the result from the first time she was across the net from Osaka, a former No. 1 who already owns two major titles at the age of 22.

Also see: Here’s how much money the men playing in this year’s Australian Open will receive as a pension

When they played each other at the U.S. Open last September, Osaka won in two quick sets and then consoled Gauff, encouraging her to speak to the spectators who were pulling for her.

One reminder of just how young Gauff is: Most of the entrants in this year’s junior Australian Open are older than she is.

Another: She is taking online classes and said she’s been given permission to turn in homework late, “considering the circumstances.”

Yet another: She doesn’t have an official driver’s license quite yet, stuck practicing behind the wheel with a learner’s permit.

But put a tennis racket in her hands and move out of the way: Gauff is now 8-2 in her nascent Grand Slam career, with three of those wins coming against women who have multiple major titles. Her next match is against No. 14 Sofia Kenin, a 21-year-old American who beat Zhang Shuai of China 7-5, 7-6 (7).

It lasted more than four hours in humid conditions, and Federer needed to overcome a hard-to-believe 48 unforced errors from his forehand and an 8-4 deficit in the last tiebreaker, which is first-to-10.

Federer had lost to Millman at the 2018 U.S. Open and it sure seemed this one might be headed that way again.

Williams vs. Wang was a rematch from Flushing Meadows last season — and the reverse result also happened for them. At the U.S. Open, Williams won 6-0, 6-1 in 44 minutes.

Wang credited that with prompting her to spend more time in the gym so she could add more oomph to her shots.

“I always believed I could do this one day,” Wang said with a laugh. “I didn’t know which day.”

Like Wang, Gauff was much better Friday than in New York. Gauff’s improvement revealed itself in her serving — she put 15 of her initial 16 first serves in play — and her steadiness.

Gauff declared herself more calm for this matchup.

“That,” she decided, “made the difference.”

So did letting Osaka make the mistakes, 30 unforced errors in all, compared to 17 for Gauff.

With that, Gauff became the youngest player to beat a top-five opponent in a women’s tour-level match since Jennifer Capriati did it at 15 in 1991.

So, Naomi, could you have done something differently?

“Put the ball in the court,” came the reply.

Williams had similar issues, and even though she went from a massive deficit to even as can be, she could not do what was required in the late going.

Down to what sure felt like her last chance, Williams came through with a cross-court forehand winner to close a 24-stroke point, then raised her arms, held that celebratory pose and looked over toward her guest box.

Finally, on her sixth try, after 1½ hours of action, she had managed to convert a break point against Wang. Soon enough, they were headed to a third set and it appeared that the comeback was on.

It turned out that Williams only was delaying a surprising defeat.

So tough at the toughest moments for so many years, Williams was the one who came undone, often displaying what she later called “the signature ‘Serena frustration’ look.”

Since grabbing major championship No. 23 at the 2017 Australian Open, while she was pregnant, Williams hasn’t added to her total.

She appeared in four major finals over the past two seasons, losing each one.

Williams owns seven trophies from the Australian Open and hadn’t lost as early as the third round at either of the hard-court Grand Slam tournaments — in Melbourne or at the U.S. Open — since all the way back in 2006.

This was the first Grand Slam tournament in 11 years with each of the top 10 seeded women reaching the third round. Who would have suspected Williams would be the first to lose, followed soon thereafter by No. 3 Osaka?

Williams was only seeded No. 8, on account of how infrequently she has competed since being away from the tour while having a baby in September 2017.

She started 2020 well enough, winning a hard-court tuneup title in Auckland, New Zealand, this month for her first trophy of any sort in three years — and first as a mom.

But Williams wasn’t able to carry that success to the Grand Slam level, where it matters the most to her.

She began her news conference by crediting Wang but eventually shifted to criticizing herself for not playing well enough to win.

“I didn’t return like Serena. Honestly, if we were just honest with ourselves, I lost that match,” Williams said. “I can’t play like that. I literally can’t do that again. It’s unprofessional. It’s not cool.”