About a quarter of worldwide deaths are from U.S. 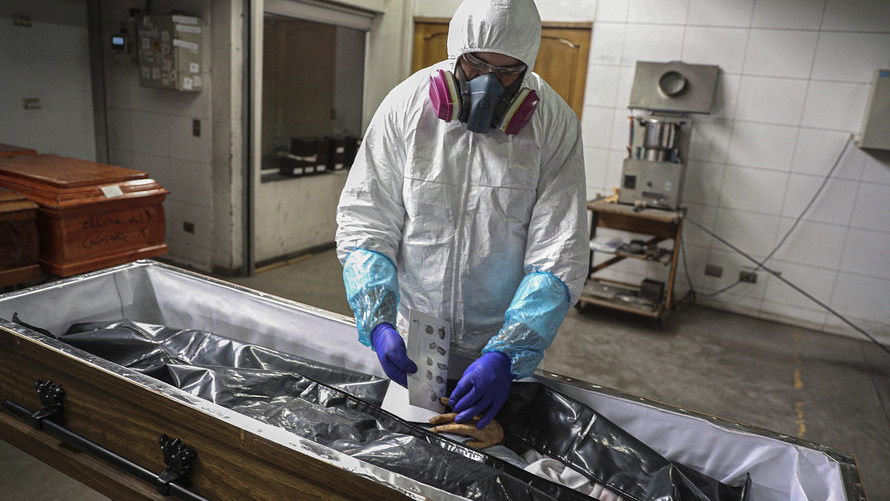 Associated Press
An employee takes the fingerprints of a woman who died from the coronavirus before her remains are cremated at a crematorium in Santiago, Chile, on Saturday. The Ministry of Health reported on Saturday the highest number of deaths in Chile since the start of the pandemic.

ROME — The world surpassed two sobering coronavirus milestones Sunday — 500,000 confirmed deaths, 10 million confirmed cases — and hit another high mark for daily new infections as governments that attempted reopenings continued to backtrack and warn that worse news could be yet to come.

“COVID-19 has taken a very swift and very dangerous turn in Texas over just the past few weeks,” said Gov. Greg Abbott, who allowed businesses to start reopening in early May but on Friday shut down bars and limited restaurant dining amid a spike in cases.

California Gov. Gavin Newsom rolled back reopenings of bars in seven counties, including Los Angeles. He ordered them to close immediately and urged eight other counties to issue local health orders mandating the same.

South Africa’s health minister warned that the country’s current surge of cases is expected to rapidly increase in the coming weeks and push hospitals to the limit. Health Minister Zwelini Mkhize said the current rise in infections has come from people who “moved back into the workplace. It was therefore inevitable that there would be cluster outbreaks as infections spilled over from communities into places of congregation such as mines, factories, taxis and buses.”

New clusters of cases at a Swiss nightclub and in the central English city of Leicester showed that the virus was still circulating widely in Europe, though not with the rapidly growing infection rate seen in parts of the U.S., Latin America and India.

Poland and France, meanwhile, attempted a step toward normalcy as the held elections that had been delayed by the virus.

Wearing mandatory masks, social distancing in lines and carrying their own pens to sign voting registers, French voters cast ballots in a second round of municipal elections. Poles also wore masks and used hand sanitizer, and some in virus-hit areas were told to mail in their ballots to avoid further contagion.

“I didn’t go and vote the first time around because I am elderly and I got scared,” said Fanny Barouh as she voted in a Paris school.

In Texas, Abbott appeared with Vice President Mike Pence, who cut campaign events from upcoming visits to Florida and Arizona because of rising virus cases in those states.

Pence praised Abbott for both his decision to reopen the state, and to roll back the reopening plans.

“You flattened the curve here in Texas ... but about two weeks ago something changed,” Pence said.

Pence urged people to wear masks when unable to practice social distancing. He and Abbott wore face masks as they entered and left the room, taking them off while speaking to reporters.

Health and Human Services Secretary Alex Azar, meanwhile, defended the fact that President Donald Trump has rarely worn a mask in public, saying he doesn’t have to follow his own administration’s guidance because as a leader of the free world he’s tested regularly and is in “very different circumstances than the rest of us.”

Addressing spikes in reported coronavirus cases in some states, Azar said on NBC’s “Meet the Press” that people “have to take ownership” of their own behaviors by social distancing and wearing masks if possible.

Azar stressed that “the window is closing” for the U.S. to take action to effectively curb the coronavirus.

Azar pointed to a recent spike in infections, particularly in the South. He said people have “to act responsibly” by social distancing and wearing face masks, especially “in these hot zones.”