The gold-platinum ratio is a prescient equity market indicator 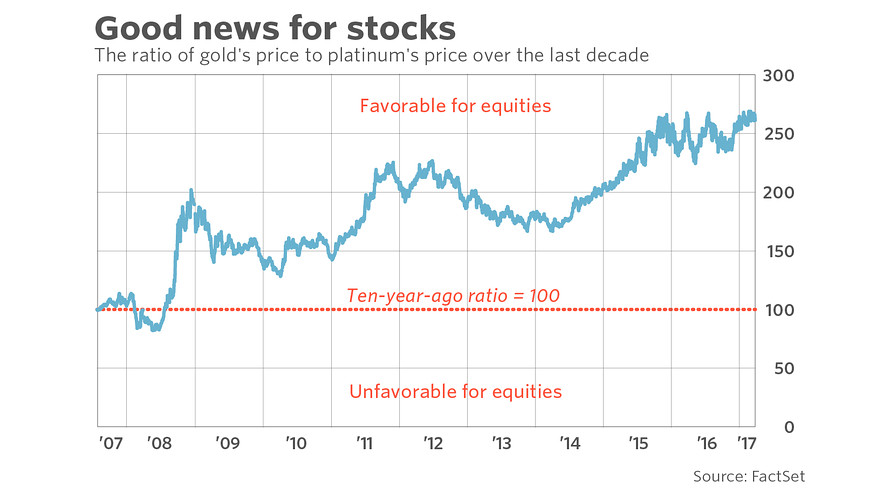 CHAPEL HILL, N.C. (MarketWatch) — Odds are favorable that the stock market will rise in the next year.

That good news comes from an unlikely source: the precious metals market. That’s because gold, even though it has struggled of late, has nevertheless been stronger than platinum. As a result, the gold-platinum ratio — which historically has been an excellent stock market indicator — remains close to a 10-year high. (Please see chart, above.)

It was a year ago when I first reported on this ratio and the academic study documenting its impressive performance. The indicator was bullish then, and, as predicted, the S&P 500 Index /zigman2/quotes/210599714/realtime SPX -0.90%  today is higher — 12% higher, in fact.

Believe it or not, the gold-platinum ratio today is just as bullish as it was last summer. If anything, it’s even more bullish: The ratio is 9% higher.

Read: There are plenty of reasons to dump stocks this summer, but here’s why you shouldn’t

The author of this academic study is Darien Huang, a finance professor at Cornell University. In a series of interviews, he explained to me that the gold-platinum ratio is a good stock market predictor because platinum is a purer play on industrial demand than gold. The price of the yellow metal, in contrast, reflects both industrial demand as well as investor demand for a hedge against economic and geopolitical trouble.

No doubt many of you will be surprised by the bullish message of this academic study, given the bearish story being told by many other academically approved indicators. Perhaps the most prominent of those other indicators is the cyclically adjusted price/earnings ratio, or CAPE, which has been made famous by Yale University finance professor and Nobel laureate Robert Shiller. The CAPE currently is higher (and most bearish) than at any other time since 1880, with two exceptions: Right before the 1929 stock market crash and just prior to the bursting of the internet bubble in early 2000.

But Professor Huang found that, at least since 1975, the gold-platinum ratio has had a significantly better track record than the CAPE of forecasting the stock market’s subsequent one- and five-year returns. In fact, he found the gold-platinum ratio to have a superior track record than any of nine other well-known indicators that researchers previously found to have predictive ability.

That doesn’t guarantee that the market will be higher in 12 months’ time, needless to say. But it’s nice to know that not all academically approved indicators are uniformly bearish.