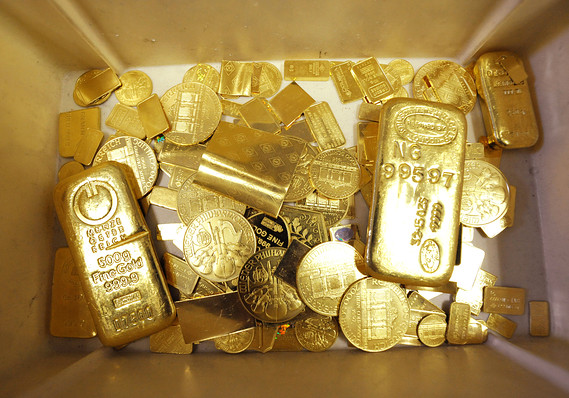 For commodity option sellers, the latter part of 2015 presented some solid option-writing opportunities. But with the exception of a few segments in the oil market, volatility was low across most sectors. Selling options in this environment can still produce firm results. But it involves a little more precision, and a little more timing. It's like tacking your sailboat against the wind. You can still get to your destination. It just takes a bit more effort.

Enter 2016 and stock-market mayhem. As we projected in our November issue of The Option Seller newsletter, volatility reappeared — at least in some sectors. The initial benefactors were gold and silver. But that could all be changing in 2016 as option-market volatility comes back to different commodities markets. 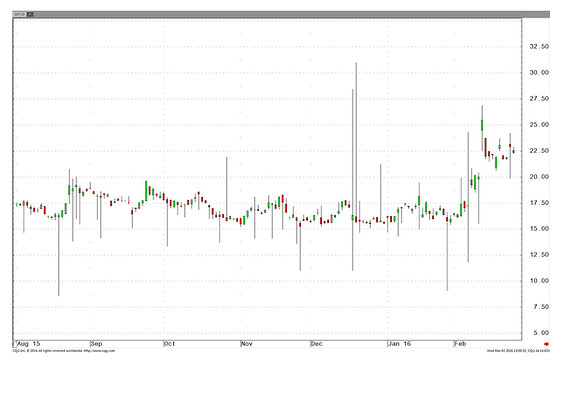 The Gold VIX briefly surged above 27 in February; up nearly 75% from its level at the end of January.

Traditional investors may view the term “volatility" as a bad thing. But for option sellers, it's a good thing. A really good thing.

This means you’re taking premium with the wind at your back. Translation: Bigger premiums, deeper out-of-the-money strikes, a potentially faster cruise to your performance destination.

Option volatility can affect different segments of the commodities markets to varying degrees. Here is our take on the major commodities sectors, and an overview of what option sellers can expect in the coming months.

Metals: The February surge in gold prices had as much to do with fearful stock investors fleeing to "haven" assets as it did with the sudden plunge in the U.S. dollar. While the government keeps insisting that the U.S. economy is fine, private economist and investors are showing signs of concern. Last month, U.S. consumer sentiment slipped to 90.7, compared with a January reading of 92.0. Personal consumption rose 2.2% in the fourth quarter, but down from 3% in the third quarter of 2015, indicating consumers are becoming more cautious. January housing starts were disappointing.

All of this has economists speculating that the Fed will go easier on additional rate hikes in 2016. This spooked dollar bulls (at least initially) and combined with stock market worries, spiked gold prices. Gold calls at $500-$600 premiums were briefly available at the 2000 strike price last month — a great reason to always keep some "powder dry" in your account for when such opportunities arise. The fireworks in gold may have passed for the near term. However, volatility will remain in the options for both gold and silver for months to come — making these superior markets for premium collection in the first quarter of 2106.

Energy: We predicted OPEC taking action on production limits live on CNBC over two months ago ( www.OptionSellers.com/OPEC ). I could hear chuckles from the studio as I outlined a case for this. But no one is laughing today. In recent weeks, Saudi Arabia, Russia, Venezuela, Qatar and Kuwait all agreed in principle, to curb production — as long as "other" producers agreed to production curbs as well. By, "other," they are referring to Iran and Iraq — who have been opponents to such limits.

Iraq has surged its production to a record 4,35 million barrels per day — the second most in OPEC as it furiously pumps for much needed revenue to fight Islamic State. Iran is eager to make up for lost time (and income) under sanctions, and has targeted an increase in exports of 500,000 barrels per day (over its levels during sanctions) by March 20. 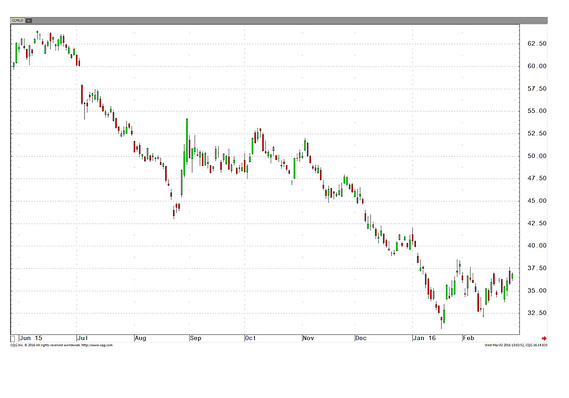 Time to rally? OPEC agreement and seasonal demand could push crude prices back above $45 per barrel by summer.

After several days of back-room negotiating, Iraq agreed to go along. An agreement was reached between OPEC and Russia that excluded Iran. Holding oil near the $30 price level for this long has the Russians and Venezuelans screaming "uncle." And while OPEC isn't screaming yet, you can bet that their eyes are watering.

Iran has left room for hope by indicating late last month that a cap could be a "good idea." But don't look for any major production cuts out of Iran anytime soon. The agreement was to freeze output at January levels.

This will do little to dent the worldwide production glut in the near term. And it is not much skin off the nose for countries like Russia or Iraq — who are already near top production capacity. What it should do is provide a psychological "floor" to oil prices. We feel this, along with seasonal demand in the northern hemisphere in the spring will be enough to get prices into the mid-40s or higher by summer.

The problem is twofold.

We still like selling distant puts in oil right now, but feel the biggest opportunity will be in writing calls in May, June and July if oil is trading $10-$15 higher than today's levels. Last month's agreement could pave the way for an actual production cut this summer. But it will be awhile before any production cut begins to eat away at the global supply overhang. Look for the topics discussed above to make the energy sector the next in line to catch volatility.

Foods: Our January projection was for grain prices to stumble sideways to lower through the first quarter as burdensome supplies remain the theme. Nothing about the last 60 days has changed that outlook. Brazil is at the beginning of what is expected to be a massive soybean harvest (about 15% complete at the time of this writing), which will do nothing to help bean prices in the short term.

It's been a more than favorable growing year in Brazil, which means the coffee harvest is also expected to be a bumper — up to 51.9 million bags. This would be an all-time record for Brazilian output. There are exceptions here, and one is cocoa, which appears to be building a base on the chart and is seeing some concern over the Ivory Coast Mid-Crop. Excess supply has nonetheless resulted in lower volatility for many of the grain and softs markets.

But the U.S., corn and soybean planting season begins later this month. The El Nino weather pattern is expected to peak in March, but its influence on weather patterns in the U.S. will be felt well into summer. Grain markets also have some fascinating seasonal tendencies in the spring. While grain-market volatility is low right now, that could all be changing in the next 60 days, making these enticing markets to watch for opportunities. We'll be featuring grain markets more prominently in our updates and this newsletter in the coming months.

While any time is a good time to be an option seller, times of higher volatility can be the best. We could now be on the cusp of one of those periods. As an option seller, it might be time to think about raising your sail.