Good jobs report shows there is still no Trump boom

There’s nothing particularly new about this economy 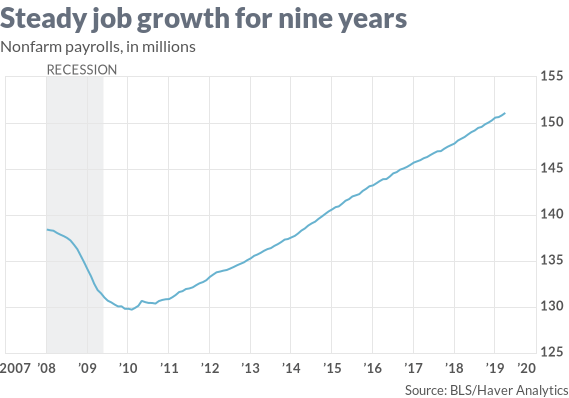 Since bottoming out in 2010, the number of jobs in America has increased at a fairly steady pace.

It’s been a springlike week for the persistent breed of optimism that really wants to believe that President Donald Trump is creating a boom where there was only despair before.

Certainly, Friday’s report that the U.S. economy created 263,000 new jobs in April, with the unemployment rate falling to 3.6%, is part of that picture.

But the new part of the argument is that better productivity numbers that came out Thursday are somehow proving the case that the 2017 tax cut is fueling an investment-led boom that will raise growth and worker pay and, as Stevie Wonder once said, “skyscrapers and everything.”

If only it were true. And if only the same people, led by White House economic adviser Larry Kudlow, hadn’t been selling the same soap last year. Right before a 20% drop in the S&P 500 /zigman2/quotes/210599714/realtime SPX -1.60%  (and 19% in the Dow Jones Industrial Average /zigman2/quotes/210598065/realtime DJIA -1.84%  ) that coincided with a fourth-quarter slowdown and one of Trump’s periodic flirtations with luring China and/or Europe into a trade war.

In fact, there’s nothing particularly new happening in this economy — not on jobs, not in wage growth and not on investment. The productivity blip may or may not last — but we know from recent history, and economic research far predating Trump, that even if the investment boom Trump predicted had happened (my colleague Caroline Baum recently laid that theory to rest) it would not be moving productivity rates for another several years.

On its face, this isn’t a bad jobs report — but it’s also not an unusual one.

We’ve now created about 2.6 million jobs over the last 12 months — solid, but no more than in 2014, and slightly fewer than in 2015. This remains true no matter what Twitter says.

The 0.2% month-over-month wage gain, is down slightly from recent months, and the 3.2% year-over-year gain is below what we saw late in the last two expansions. Adjusted for inflation, it also points to real wage gains similar to those in 2014 and 2015 when gasoline prices were pushing down overall price growth.

So please, let’s dispense with the notion that job growth has accelerated, that wage growth is skyrocketing or that the rate of decline in the unemployment rate has picked up. None of these is true.

All that has happened is that trends that were firmly in place by 2014 are still playing out.

For people playing the stock market, this is actually a good thing. The best thing stocks have had going for them throughout this long, often unsatisfying expansion is that low interest rates make stocks more attractive. There’s nothing here that will make the Federal Reserve raise rates any time soon. (Naturally, Trump has said the Fed should cut rates by a full percentage point because the economy is too weak, when he isn’t saying it’s the best economy ever).

The new argument is that the first-quarter productivity numbers are new and important proof of an incipient boom. And that’s both not true and a little bit dangerous.

Some of us who were around for the late 1990s productivity boom, which persisted until about 2006 even though the surge in technology spending that spurred it petered out by late 2001, eventually got to know MIT economist Erik Brynjolfsson, who simply explained why this happened.

Drawing on studies of Fortune 500 companies, Brynjolfsson showed that it takes as long as five years to reap productivity gains from major new technology investments.

There’s a straightforward set of reasons. Productivity rises when tech lets companies figure out faster ways to do business. Maybe they eliminate paper forms. Maybe they share data with suppliers and customers so that they fill each other’s orders faster, or even anticipate their needs. The ways this happens are as many, and as different, as the companies themselves.

What they have in common is that they need time to figure out how to do it. That’s why productivity growth lags investment growth, usually by several years.

And it’s how you know — not speculate, but know — that the tax cut had nothing to do with the first-quarter surge in reported productivity growth. Which, since the Labor Department also reported declining output and hours worked in manufacturing during the quarter, may not be real anyway.

It’s certainly entertaining when Washington figures hold forth on productivity, a phenomenon nothing in their day-to-day professional lives forces them to encounter.

But don’t take it seriously. The economy we have is the one we had last week. It’s growing about 2.5% a year, maybe a little more. Real wages are rising about 1.5% a year thanks to low inflation, which is pretty good. There’s still enough slack in the labor market to keep interest rates low, helping prospects for stocks.

And it was all happening before 2017. Whether you like to tell yourself bedtime stories or not.