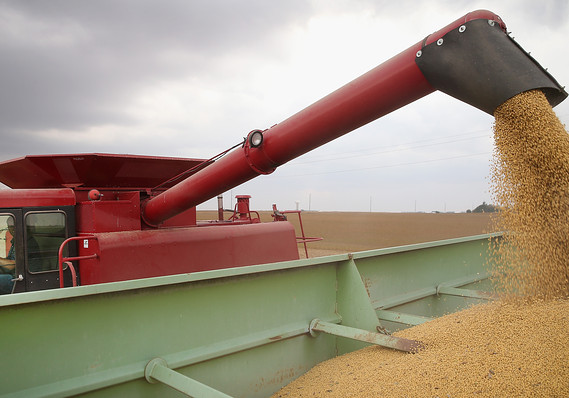 (Author’s update: The Aug. 12 supply-and-demand report not only confirmed our view that yields were not negatively affected by early summer rains, but were actually helped. The USDA increased expected 2015 yields to 46.9 bushel per acre (46.0 in July) and increased 2015/16 ending stocks to 470 million bushel (from 425 in July). OptionSellers.com believes the market will continue to weaken into harvest and will continue to seek out shorting opportunities in the coming weeks.)

While the weather bulls had driven soybeans to rally by $1.40 per bushel from mid June to mid July, reduced yields that many expected may not be coming to pass. While beans have since retraced some of their July gains, we feel the clock is running out for bean bulls and that further upside will be limited. This sets up a potential opportunity for short-sellers as harvest approaches in September.

Why the soybean weather rally?

Soybeans have been in a mild but consistent downtrend since last November as robust harvests in both the U.S. and Brazil bulked up global supply. That trend was not helped by the U.S.'s ambitious planting agenda in 2015. U.S. soybean planted area for 2015 is estimated at a record high 85.1 million acres, up 2% from last year.

The soaking weather pattern covered most of the key growing regions in the U.S. Illinois, the country's top-producing soybean state, saw 11-14 inches of rain in key producing counties in June — a record for many.

This, of course, brought out the weather bulls. "Too wet," goes the argument, "roots will rot."

I've been trading soybeans since 1984. I've seen my share of weather rallies. One thing I can share is that dryness and/or heat are typically much bigger enemies to a soybean crop than rain. True, it is not unheard of for too much rain to hurt yields, either through root rot, fungus or outright flooding (see 2008). But a period of heavy rainfall, while concerning at the time, can often be recovered from prior to harvest.

Such could very well be the case now as the second half of July has been warmer and drier, allowing plants in Illinois, Iowa and Indiana to catch up on their sunshine while root moisture levels remain adequate. Indeed, soybean prices back tracking into August reflected improving weather conditions.

The primary argument of the bulls is that the excess rain in June will hurt yields. But the USDA's latest crop review does not seem to support this argument. The July 10 report left projected 2015 yields at 46 bushels per acre — unchanged from the June report. While below last year's record yield of 47.8, this is a healthy yield and well above the 2013 figure of 44 bushels per acre.

The bulls continue to argue that the "damage" will not show up until the August report. Perhaps, but crop conditions in the July 12 condition report showed soybean plants in good to excellent condition holding at 62%. While this is below last year's 72% for this time of year, its still a tick above the 10-year average of 61%.

While we do not pretend to know what the August USDA crop report will say (we don't have to as option sellers), our guess is that any lowering of yield as a result of June rains will be disappointing to the bulls. A lowering of yields will only be bullish if it is greater than trader expectations. We think the odds of that are low. But a slighter larger reduction could bring a day-or-two-long pop to prices.

That's why you sell calls instead of short the futures. Just in case you're wrong.

But the yields aren't the primary reason to be bearish beans.